At more than $2K a month, Burnaby is the third most expensive Canadian city to rent: report

Prices for one-bedroom rentals went up, but slid in the other direction for two-bedroom suites.

There's no relief in sight when it comes to rental prices in Burnaby.

According to Rentals.ca's September report, averages for both one and two-bedroom rentals averaged more than $2,000 per month in August — $2,146 and $2,553 respectively.

Burnaby sits as the third most expensive city to rent in behind Vancouver and Toronto, Ont.

One-bedroom rentals increased 6.8 per cent between July and August and 21.6 per cent from the same months in 2021.

Two-bedroom suites have decreased 6.9 per cent during the past month and are up nine per cent in the past year.

B.C. has the highest average rental rate in the country at $2,578 last month.

"There continues to be outsized rent growth in Canada, with the average listing on Rentals.ca nearly $200 more expensive than a year ago," the report says.

"The total number of listings on Rentals.ca is higher than one year ago, and the average listing is getting 38% more pageviews, suggesting significantly more demand than last year. This year’s listings received almost 70% more pageviews than the pandemic-impacted August 2020 figures."

"With another interest rate hike from the Bank of Canada, potential buyers are further dissuaded from purchasing, sending more demand into the rental market. The hikes are having a negative impact on job growth, which could keep rents in check if young Canadians find themselves jobless." 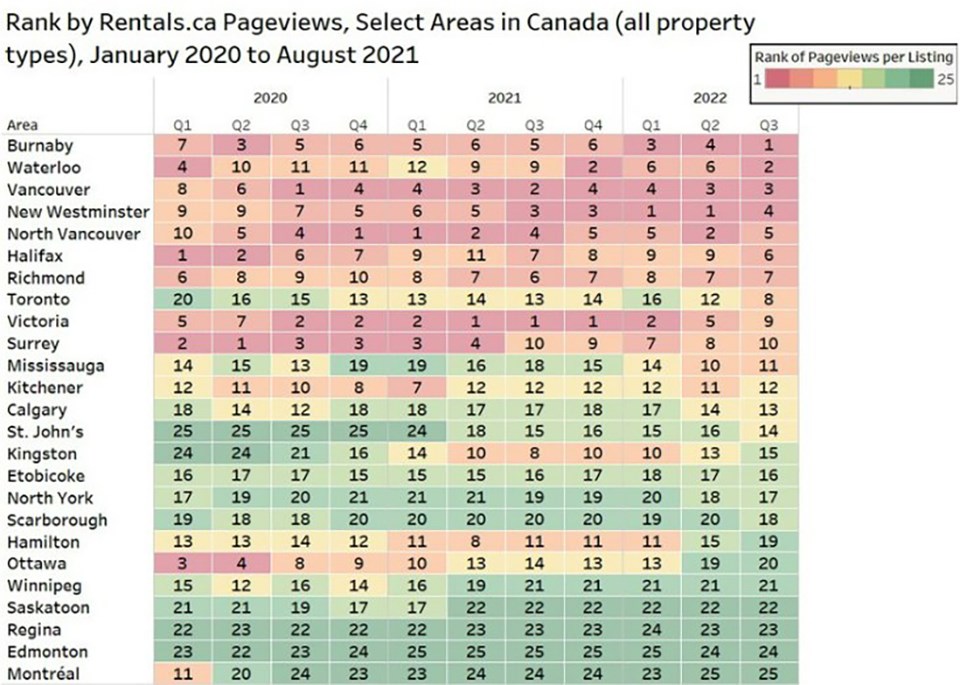 The Real Estate Board of Greater Vancouver's (REBGV) August report confirms the drop in house purchases as interest rates rise.

"With inflationary pressure and interest rates on the rise, home buyer and seller activity shifted below our long-term seasonal averages this summer," REBGV spokesperson Andrew Lis said in a Sept. 2 release.

"This shift in market conditions caused prices to edge down over the past four months."

As of last month, Burnaby East saw a benchmark price of $1,109,000 (-3.9 per cent compared to July of this year) for residential/composite homes.

Burnaby North saw a benchmark price of $1,962,000 in August (-5.5 per cent compared to July of this year) for single-family detached homes.

Townhomes also saw drops in all three Burnaby regions with Burnaby South at a benchmark price of $964,300 (-2.6 per cent compared to July of this year).