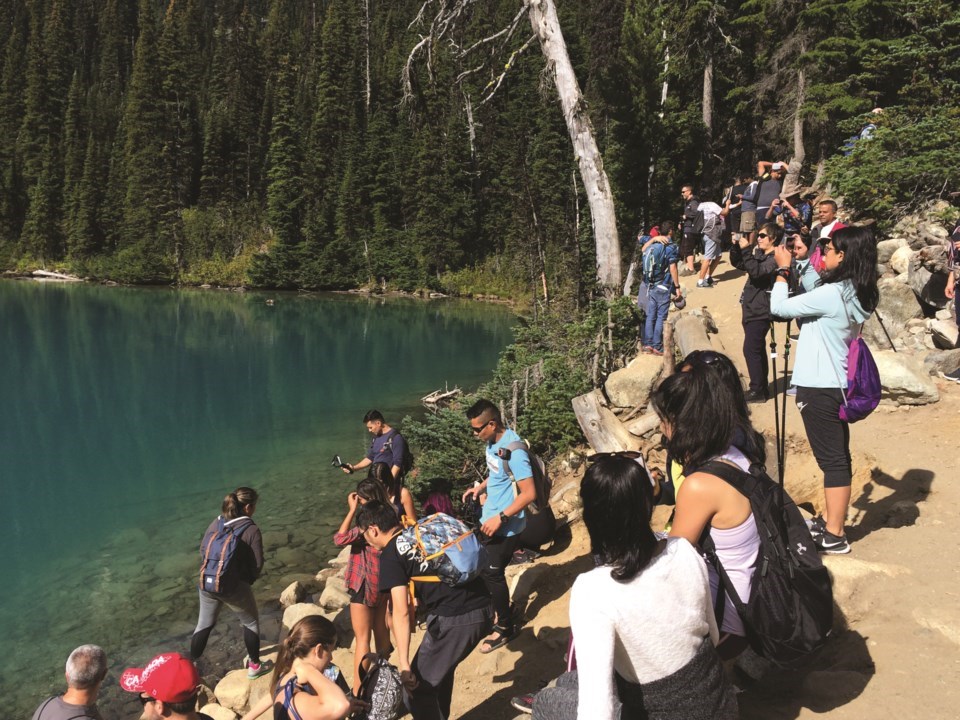 A recent WorkSafe BC inspection of BC Parks’ Alice Lake jobsite found that staff aren’t being properly trained before carrying out potentially dangerous tasks for the first time. A crowd of visitors to Joffre Lakes Provincial Park is pictured.JOEL BARDE

A recent WorkSafe BC inspection of BC Parks’ Alice Lake jobsite that could have provincial implications has raised concerns over outdated or unclear safety and training procedures for staff, according to a report obtained by Pique.

Occupational safety officer Lee Fletcher ultimately issued five compliance orders against BC Parks, all surrounding workplace safety and training protocols, as park rangers continue to contend with skyrocketing public use of provincial parks that has only been heightened by the pandemic.

In his inspection report dated Sept. 16, Fletcher said he had not received a copy of the office’s Safety Management and Accident Prevention manual, despite requesting it and staff reporting it had been updated as recently as February.

“Based on this information and no further information being provided by the employer at this time, the Annual review and updating is not being done. By not doing the annual review of this manual the employer is placing there [sic] employees and other workers at risk,” he wrote.

“The employer’s responsibility is to make sure staff are fully trained and oriented on dangerous work and pointing them to an outdated and incorrect manual to follow instructions before doing dangerous activities for the first time is not dully diligent.”

BC Parks staff carry out a number of potentially risky activities as part of their duties, including rigging helicopters to transport materials, managing and disposing large volumes of human waste, and ensuring public compliance in increasingly crowded provincial parks. Rangers also regularly work with power tools such as chainsaws, operate boats, and are tasked with issuing tickets under the Park Act, as well as for more serious offences under the Motor Vehicle Act and Firearm Act, for instance.

Fletcher found that no standard training or operating procedures exist for workers “flying propane, lumber or honey pots from back country [sic] locations using a helicopter,” and that training records are “inconclusive, as I would need to interview each worker as to when they last did a task [versus] when they last received training.”

He went on to recommend that operating procedures be reviewed based on their associated risk, from high to low. “The employer is expected [to] audit the workers’ current training against the duties they have been performing to ensure policy and procedures are accurately followed,” he wrote.

In the office’s standard operating procedures, Fletcher found a broad reference to the potential for “violence from squatters” in provincial parks, without a subsequent referral to any existing violence risk assessment or protocol.

BC Parks last completed a violence prevention risk assessment in 2012, which Fletcher deemed “is not acceptable due to age and clarity to those using it.”

“This review is 8 years out of date and therefore there is another 8 years worth of data which needs to be reviewed to determine that the assessment is still accurate,” he wrote.

BC Parks and the Conservation Officer Service formed an occupational health and safety committee for the South Coast region just weeks prior to WorkSafe’s inspection, a joint structure that “doesn’t address the fact that the duties and functions within these various organizations are not necessarily the same,” Fletcher wrote. “Further, there needs to be a central committee, due to the geographical make[-up] of BC Parks and the limited numbers in a given office. This would be considered more appropriate to ensure there is a conduit between regions specific to the safety issues Park Rangers encounter throughout B.C.”

Even pre-COVID, BC Parks was seeing steady increases in demand by recreationalists seeking access to the outdoors. Twenty-one million British Columbians reported visiting a provincial park in 2014/15, a number that had climbed to 26 million by 2018/19. While stats for this year have not been released, Google mobility data indicated between a 150- to 200-per-cent rise in visitation to parks through the spring and summer—even with the temporary closure of high-use parks such as Joffre Lakes and Garibaldi (Garibaldi later reopened under a pilot pass system].

BC Parks has been chronically underfunded, at least compared to its provincial and American counterparts, for years. Despite managing the sixth largest park system in the world, BC Parks ranks last on expenditure among the provinces, at just $2.80 per park hectare, compared to, for instance, $30 a hectare in Alberta.

A spokesperson for the Ministry of Environment declined comment, as government communications are limited to public health information during the election period.  A WorkSafe BC representative also declined public comment, referring Pique to the inspection report.