Youth custody centre staff say they are dealing with more violence in the prison because inmates do not face severe enough consequences
Nov 1, 2016 1:30 PM By: Tereza Verenca 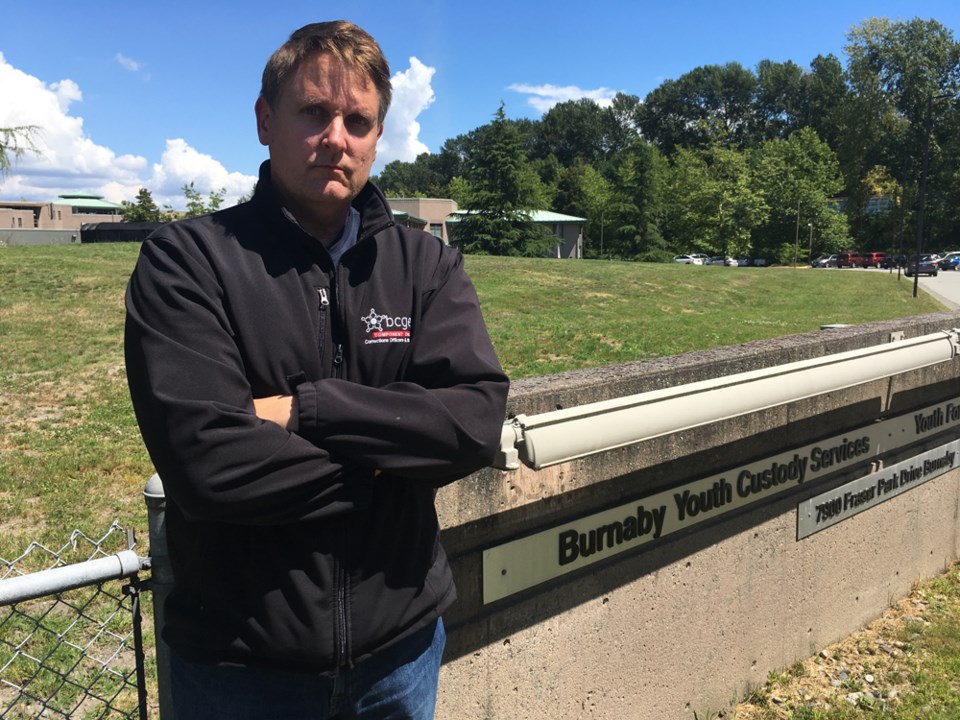 Dean Purdy, a spokesperson with the B.C. Government and Service Employees’ Union, said the riot at Burnaby’s youth prison is a reflection of the changing inmate demographics. More youth are showing up with gang affiliations and mental illnesses. Meanwhile, the prison’s program director said the motivating factor was a loss of privileges associated with a room search.Jennifer Moreau

Teens who participated in a riot at the Burnaby Youth Custody Services Centre this past summer openly mocked a perceived lack of severe consequences, according to documents obtained by the NOW.

The Ministry of Child and Family Development’s incident investigation report, acquired through a freedom of information request, paints a picture of events leading up to and during the July 19 riot that seem to support earlier anecdotal claims made by union officials.

The incident, which began around 8:22 p.m., started with a supervisor calling a Code Red after a youth who seemed “extremely nervous and fidgeting” asked for the time. He pushed past the supervisor as she was attempting to close the office door. Six youth then climbed up on cupboards above the sink and on the window ledges, according to the report.

“All residents began throwing food and hot water they had made for tea, at staff, while yelling, ‘We don’t give a f**k’ and ‘What, are you going to give me a two-hour timeout?’” the document reads.

Despite being told to return to their rooms by staff, all youth, except one, did not comply.

The youth then started to throw water bombs toward the office, which prompted the staff who were inside to place sandbags in front of the door.

Staff also witnessed residents breaking a television, a microwave and a dishwasher. The rioters then proceeded to kick the office door in an attempt to break in. At this time, staff collected the unit logbooks and files, secured all the doors and exited the units.

“Through the unit door in the rotunda … we witnessed the residents covering their faces with clothing to conceal their identities,” according to statements from unidentified staff members in the report.

The youth did gain access to the office, where they were overheard using the phones to call control and to make calls to the public. Staff in the parking lot also saw the residents trying to break the windows to escape.

Staff then began to smell smoke, which came from a small fire that had been started, according to the report.

“We had also noticed that they had caused a flood of the unit, as there was water pouring into the classrooms in the rotunda.”

Both police and the Burnaby Fire Department responded to the riot, which ended around 2:30 a.m. There were no injuries to staff or youth.

The B.C. Government and Service Employees’ Union, which represents staff at the custody centre, maintains violence in the youth prison has risen in the last couple of years.

“We’ve been told by the correctional officers that work there that violence is a big concern,” said union  spokesperson Dean Purdy, adding there was another riot attempt on Aug. 24 and a “significant fire” on Sept. 18 at the Burnaby facility.

Purdy told the NOW violence has gone up because youth don’t face severe consequences for their actions. Rather, he said, the ministry takes a “therapeutic” approach when it comes to punishment.

“If they participate in a riot, the most they can do is lock them up for, I think, 60 hours. Can you imagine? What are the consequences? A kid getting locked up for 60 hours isn’t going to deter that type of behaviour,” he said. “Our members who work at the Burnaby youth custody centre are fed up. Staff feel hamstrung to maintain control.”

According to the Ministry of Children and Family Development, the total number of incidents of violence has not increased.

“It has remained steady – or declined – over the past three-and-a-half years,” reads an emailed statement.

The ministry said the primary motivating factor behind the July 19 riot was a room search earlier in the day, which resulted in a loss of privileges.

“Youth can receive a consequence for an infraction, including the loss of privileges – like restricting their participation in an optional program like crafts, cooking or wood working.

“Staff conduct searches of youth, their possessions, their clothing or their room when staff believe – upon reasonable probable grounds – that a youth is in possession of contraband items,” the statement reads.

The custody centre also has a contract with a drug-detection dog company, used only when contraband is suspected. Youth confinement, meanwhile, is used for security and safety reasons, not for disciplinary reasons, the ministry said.

The summer incident led to a number of recommendations, including completing a review of the accessories available in each unit to see what items are necessary and which ones could be removed. Deadbolts were added to office doors, while staff ratios during meals and before bedtime were increased.