Walking into the new $79-million Burnaby North Secondary School, students will enter a 15-metre-wide, three-storey-high vista running from the main entrance right through the back of the glass-walled gymnasium.
Jun 14, 2019 9:23 AM By: Cornelia Naylor 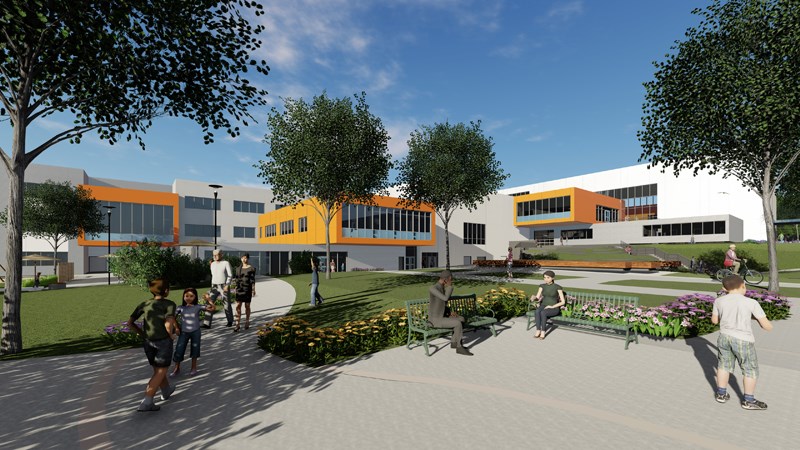 Walking into the new $79-million Burnaby North Secondary School, students will enter a 15-metre-wide, three-storey-high vista running from the main entrance right through the back of the glass-walled gymnasium.

This space will be the “core and heart” of the new school, according to principal Dave Rawnsley.

Plans for the new Burnaby North Secondary were revealed at an open house Monday (June 10) and got an enthusiastic response from a “consistent flow” of students, parents and community members who came out to take a look, according to Rawnsley.

The new building will be a true community hub, according to school officials, featuring the school proper, a conference centre and a neighbourhood learning centre with child care and adult and continuing education space.

“The adults and the daycare kids and our kids aren’t all flowing through the same hallways, but they’re attached to the same building,” Rawnsley said.

One theme in the building’s design he came back to more than once was flexibility.

The conference centre, for example, will back onto the school’s theatre, and the two spaces have been designed to open up on to one another when a bigger space is needed.

Instead of wings with long, linear hallways, the school’s classrooms will be arranged in “pods” – nine six-classroom clusters arranged in a “horseshoe” shape with the centre of the horseshoe designed to function as a mini student commons or “breakout space.”

“Rather than feeling like an extension of the hallway, it feels like a tiny little neighbourhood or community that’s off of the core and the heart of the school,” Rawnsley said.

Some of the rooms in each pod will be fixed, like traditional classrooms, and others will have the ability to either be fixed or to open up to create larger spaces and smaller spaces and breakout rooms.

The arrangement is designed to allow for “communities of learning” that aren’t necessarily centred around one particular discipline like science or English.

Unlike the 1960s experiments in school architecture during the open school craze, though, the new Burnaby North Secondary building won’t lock teachers and students into a particular teaching and learning approach, according to Rawnsley.

“One of the foundational pieces of the planning right from Day 1 was looking at, how do we build as flexible a building as we possibly can, so one that meets the needs of our students now but also will do so moving forward,” he said. “We know that the architecture itself doesn’t drive learning, but it certainly can enhance or inhibit it … The building we’re operating in right now, we’re working around the physical limitations and structures in order to align with changes in curriculum or connect kids to community in a meaningful and thoughtful way.”

Compared to North’s current sprawling campus, the new building will have a relatively small footprint, sitting where the gravel fields are now south of the school.

After the old buildings are demolished, a new playing field will go where the north building sits now and some park area landscaping will go into the area towards Kensington.

The provincial government approved $79 million last October to replace the 63-year-old Burnaby North Secondary building, which was flagged as a seismic risk in 1992 and had been the district’s number 1 seismic replacement priority for years, according to secretary-treasurer Russell Horswill.

Construction on the new 1,800-student school is expected to start in spring 2020 and be complete by fall 2022, according to the province.

It was originally projected to be complete a year earlier.