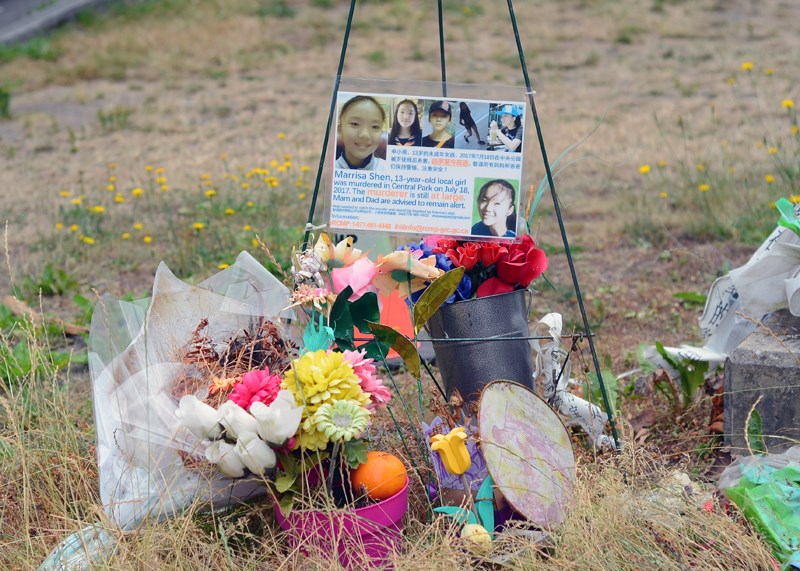 A small memorial to 13-year-old Marrisa Shen remains near an entrance to Burnaby's Central Park a year after the teen was found dead in the park.Cornelia Naylor

A 28-year-old man has been charged with the murder of 13-year-old Marrisa Shen.

Ibrahim Ali had a first-degree murder charge sworn against him on Saturday. Superintendent Donna Richardson with the RCMP’s Integrated Homicide Investigation Team said Ali was a Syrian national with permanent residency in Canada.

The charges, announced at a press conference Monday morning, came more than a year after Shen’s body was found in Central Park on July 18, 2017.

Richardson said Ali only came to the attention of investigators two weeks ago, after one of the longest and most resource-intensive investigations in the unit’s history. More than 1,300 residents were canvassed, 600 interviews conducted and 1,000 hours of video from 60 different locations were reviewed as part of the investigation, she said.

More than 2,000 persons of interest we identified and later eliminated as possible suspects in the last 14 months, Richardson said.

Richardson said Ali was a Burnaby resident who came to Canada as a refugee 17 months ago, meaning he would allegedly have killed Shen approximately three months after arriving in the country.

But Richardson said she hoped the incident wouldn't result in a backlash against refugees.

“Historically, we have seen that happen," she said. "I’m hoping that in this case we do not see that happen. I think, by and large, our refugees that come to the country are hard-working citizens that are happy to be in Canada, and I would just hope that we look at this incident for what it is: It’s a one-off situation.”

The Immigrant Services Society of B.C. issued a statement Monday following several requests from media outlets, including the NOW.

"This was a horrific case and we share the public's and the victim's family's desire for justice for Marrisa," the statement reads in part. "At the same time, we wish to caution the public against stigmatizing an entire ethnic community for the alleged criminal act of one individual from that community."

Burnaby RCMP’s Chief Supt. Deanne Burleigh said her detachment has been working hard to provide a sense of safety in the city. Her officers ramped up patrols following the murder to “ensure everyone can feel safe,” she said.

Shen’s body was found in Central Park last July, but police have had few updates since.

Earlier this summer, on the anniversary of the teen’s death, police said no suspects had been identified, despite investigators following up on 200 tips from the general public, reviewing 1,000 hours of video and conducting more than 600 interviews.

IHIT had used the one-year anniversary to renew calls for any information from the public that might advance the investigation.

Shen was last seen at 7:38 p.m. on July 18, 2017 on the south side of Central Boulevard crossing McKay Avenue walking west.

She was reported missing four hours later, and her body was found in the early morning hours of the following day after Burnaby Mounties used GPS to track her cell phone.

Just over a week later, IHIT announced investigators believed Shen’s death was the result of a random attack.