A Burnaby housing co-operative is unsure what the future holds for its subsidized residents.
Nov 21, 2017 10:48 AM By: Tereza Verenca 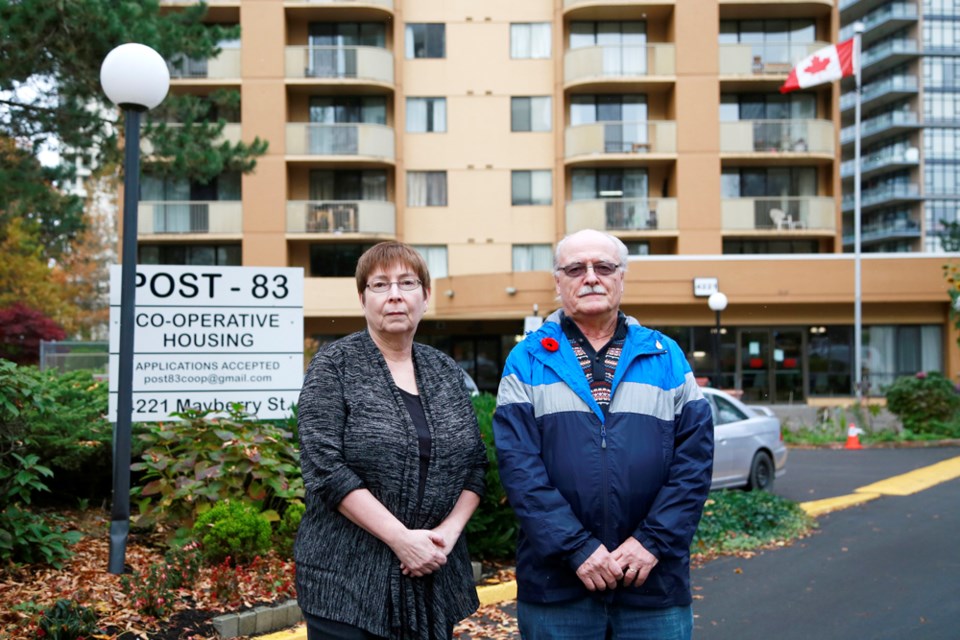 Ruth Vodden, secretary of the board of directors, and Mark Perry, chair of the financial committee at Post 83 Co-op in Burnaby, are concerned about what will happen when subsidies end for 45 families in the housing complex. The co-op’s agreement with the federal government ends next March, as do others across Canada, and it’s unknown at this time if those families will be able to stay in their homes.Lisa King

A Burnaby housing co-operative is unsure what the future holds for its subsidized residents.

Some funding agreements between the federal government and co-ops across the country are scheduled to end next March, including one at Post 83 Co-Op on Mayberry Street, where 45 low-income households rely on subsidies to pay the rent.

“There’s a lot of people that are wondering what’s going to happen,” Mark Perry, a resident at Post 83 and chair of the co-op’s financial committee, told the NOW. “If they can’t pay our market rent, what are they going to do? Where are they going to go?”

There are 26 housing co-ops in Burnaby. The federal government got out of housing in the early 1990s, when funding to build new homes dried up, along with the network of affordable housing builders.

When asked what will happen to Post 83’s agreement, Audrey-Anne Coulombe, spokesperson for Canada Mortgage and Housing Corporation (CMHC), pointed to the Liberals’ National Housing Strategy currently in the works.

“Thirty million (dollars) was invested through budget 2016 to renew subsidies until March 2018 as a short-term measure while developing the National Housing Strategy,” she wrote in an email.

(Post 83 was not one of the co-ops to receive funding under an extended operating agreement).

“Budget 2017 will invest more than $11.2 billion over 11 years, in addition to preserving the baseline funding related to expiring social housing agreements. These investments are for initiatives designed to build, renew and repair Canada’s stock of affordable housing and help ensure that Canadians have housing that meets their needs,” the email read.

Right now, it’s unclear how that money will be divvied up and what it means for the country’s co-op buildings.

Coulombe noted “further details” about the government’s housing strategy will be released this fall.

Kennedy Stewart, NDP MP for Burnaby South, criticized the Liberals and CMHC for not giving a more concrete answer.

“There’s a housing crisis and it’s very acute in Burnaby. ... If your rent doubles, anybody’s rent doubles, they’re not going to be able to stay in their housing, and that’s what’s happening. This is very disruptive for the families there. ... Not knowing if you’re going to be living in Burnaby in another six months is very stressful, so they (the government) should be clear.”

Thom Armstrong, executive director at the Co-operative Housing Federation of B.C., said his team is developing strategies to address situations like Post 83’s. He said in Post 83’s case, the land is privately owned by a union pension fund (other co-ops are owned by a municipality).

There are “opportunities” to buy out the landowner, Armstrong told the NOW.

“They’re typically not interested in extending a lease; their primary concern is getting the cash value out of the asset, especially in today’s very heated housing market. Our efforts have been around putting together financial packages that will be fair and attractive to the owner of the land, but affordable for the existing members,” he explained.

“What that almost always creates is an equity gap. That’s what we’d be looking to the (federal) government to do is to fill that gap in a way that makes the transaction viable and leaves the existing members in place.”

Armstrong added things are somewhat complicated with Post 83 because the union pension fund owns assets at four housing co-ops – two in Burnaby and two in Coquitlam.

“We’re not sure at this stage whether a deal is possible for any one of the co-ops or it has to be for all of them. That makes it considerably more challenging.”

Armstrong suspects the national housing strategy could be released this week.

“They might just say there’s a fund for the acquisition of lease-hold properties. That would be a game changer,” he said.