The City of Burnaby is seeking grant funding from senior governments as it prepares to spend nearly $20.5 million on construction of the Highway 1 pedestrian overpass. City council recently authorized staff to pull $20.
Oct 29, 2020 4:45 PM By: Dustin Godfrey 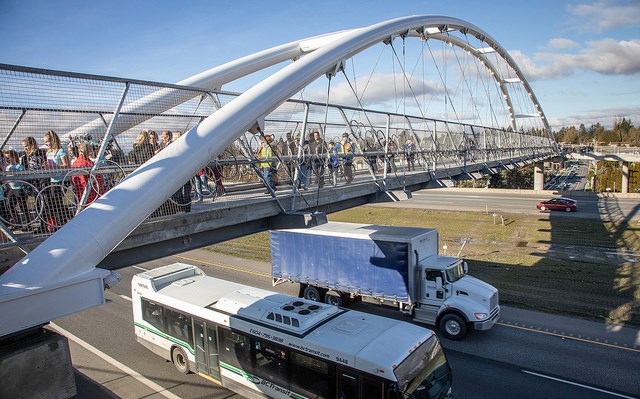 Burnaby could build a pedestrian overpass over Highway 1 like this recently completed project in Abbotsford.

The City of Burnaby is seeking grant funding from senior governments as it prepares to spend nearly $20.5 million on construction of the Highway 1 pedestrian overpass.

City council recently authorized staff to pull $20.45 million from its community benefit bonus reserves for the project, while also directing staff to apply for a grant through a federal-provincial program aimed at funding community, culture and recreation infrastructure.

The reserve funding, according to a staff report, is intended to fund the project ahead of the 2021 budget, which will be approved by May next year.

The infrastructure funding program received upwards of $100 million from the federal and provincial governments in June this year, according to a city staff report, with funding available for up to 73.33% of the project’s total cost (40% federal and 33.33% provincial). That means up to $15 million of the project could be coming from the grant.

The overpass is intended to connect Burnaby Lake and Deer Lake, while also integrating the city’s trail network with the Central Valley Greenway.

The city commissioned consulting firm McElhanney in spring 2019 for a $500,000 feasibility study to determine a bridge location; conduct environmental, geotechnical and archaeological analyses; and draw up a design for the bridge.

“I don’t know who came up with this idea, but it’s great,” now-deceased councillor Nick Volkow said when council approved the study. “I’ve had, over the years, a number of people approach me in regard to this very issue. I look forward to the report.”

That design will be up for council’s approval for a more detailed drafting at a later council meeting, according to city staff.