Council passed a motion on Monday related to a labour dispute
Apr 27, 2021 2:03 PM By: Chris Campbell 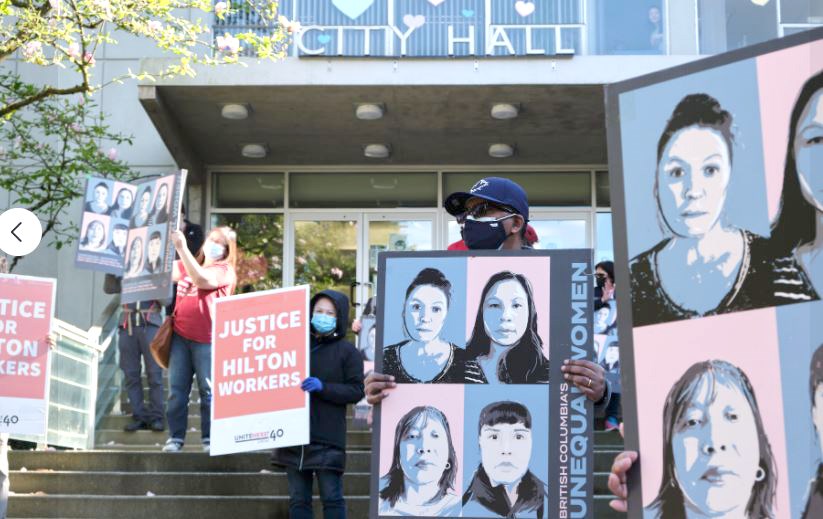 Locked-out Hilton Metrotown hotel workers rallied at Burnaby City Hall on Monday to urge council to adopt a motion to not spend city money at the hotel during the labour dispute.

And then city council did exactly that.

The workers are represented by Unite Here Local 40.

At the meeting on Monday, council passed a motion to support the workers and called for a return to their jobs as business recovers. The City of Burnaby is the first municipality in the province to commit to not patronizing the hotel.

“I’m so happy that Burnaby City Council did the right thing and stood on the side of Hilton Metrotown workers,” said Jaswinder Bassi, a laid-off room attendant and Burnaby resident who has worked at the hotel for almost 15 years. “At a time like this, we need our elected officials to do more to protect workers’ jobs. My son was five when I started working at Hilton. He’s 19 years old now. I helped support my family with this job. We shouldn’t lose what we’ve worked so hard for just because of the pandemic.”

Since the lockout, workers have set up a picket line and are demonstrating daily outside the hotel. Union customers, including BCGEU, BCTF, MoveUP, HEU, PSAC-BC, and UFCW 1518 have vowed not to patronize the hotel until Hilton Metrotown guarantees workers can return to their jobs, rather than be replaced, when the COVID-19 crisis is over, the union said.

“I’m pleased that the mayor and council decided to pass the motion and support us,” said Sergio Moyer, a front desk supervisor and Burnaby resident who has worked at the hotel since it opened. “Burnaby City Council sent a strong message today that hotel workers deserve the right to return to their jobs when business recovers. Hilton Metrotown workers made this hotel successful for over 20 years and we are determined to fight until we get our jobs back.”

Burnaby Mayor Mike Hurley earlier this month took part in a news conference with the union representing the workers to tell the company to get back to the bargaining table.

“Get back to the table, deal with the layoff and recall provision of the contract, extend that until after this pandemic is over and allow these workers the dignity to return to their jobs as they all want to do,” Hurley said.