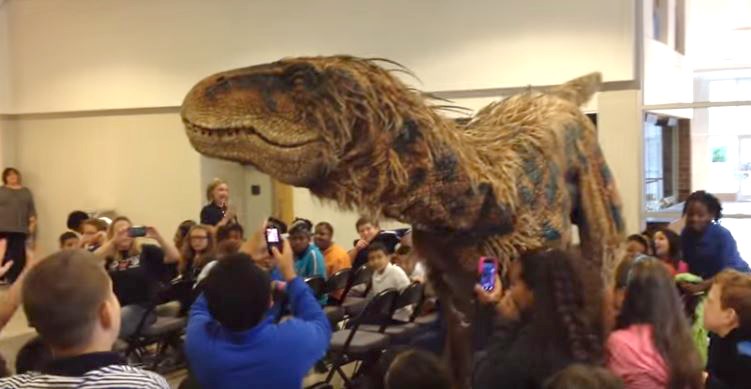 This velociraptor is part animatronic and part mechanical and has appeared at events around North America. This photo is taken from a show in Oklahoma City. Vancouver Dinosaur photo

A group of Burnaby elementary students got an amazing Halloween treat today.

The students of Ecole Brantford were visited by a “real” velociraptor - named Vince - that wandered the playground - allowing the children to pet the dinosaur and walk along with it. Vince then came into the gym for an assembly.

You can see the video below of the kids engaging with it – some close and some staying a safe distance away.

It’s not a real velociraptor, of course, but a dinosaur that is part animatronic and part mechanical.

Inside is the dinosaur’s creator Kevin (who didn’t want his name used – he goes by Vancouver Dinosaur on Facebook), who wanted to do something special for his son Aiden for Halloween.

Kevin says this dinosaur has appeared in the Walking With Dinosaurs travelling arena show.