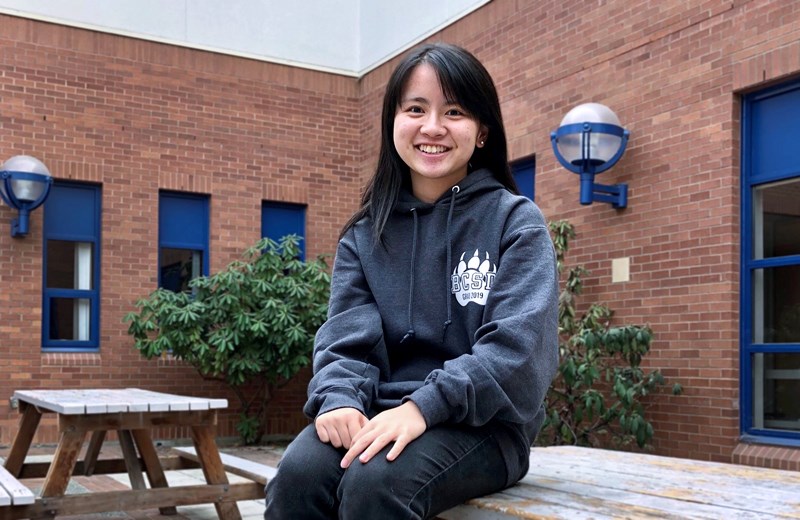 B.C. Provincial School for the Deaf Grade 12 student Le Yi Deng made history this year when she became the first BCSD student to win the Burnaby South Secondary female athlete of the year award.Contributed

Watching 17-year-old Le Yi Deng grin and sign enthusiastically about her busy final year at the B.C. Provincial School for the Deaf and all her future plans, it feels all wrong to steer the interview around to Usher’s Syndrome – a disease that is slowly robbing her of her sight.

But I do, and Deng tells me about a day in Grade 4 when her mom picked her up from school and took her to the doctor for a check-up.

It was the day she found out she was losing her vision.

“That was really sad news for me,” she says through an ASL interpreter. “I didn’t know what that meant for me in the future, how involved I was going to be and what I wanted to do.”

Acceptance is an ongoing struggle, she says, but it has come with a corresponding determination:

“I’m still trying to achieve what I can,” she says.

This year that attitude made history, when Deng became the first BCSD student to earn the Female Athlete of the Year Award at the joint Burnaby South Secondary-B.C. Provincial School for the Deaf grad ceremony.

Deng didn’t know she was being given the award (along with co-winner Stephanie Zaborniak) until she was ready to walk onto the stage.

She has played numerous sports since getting her fateful diagnosis in Grade 4, but, starting in Grade 11, she noticed few BCSD students were getting involved in the many different sports available at Burnaby South Secondary, which houses the provincial deaf school.

She decided to lead by example and try to get the word out.

It hasn’t always been easy, she says, with some coaches thinking she wouldn’t be able to do things the rest of the team could.

Undeterred, she got involved in every sport she could in her last year of high school this year: cross-country, volleyball, basketball, wrestling, track and field, ultimate Frisbee and dance.

It’s an attitude she intends to take with her as she starts at Vancouver Community College next year in the hopes of getting into UBC after that and eventually becoming a lawyer.