Dogs in northeast Burnaby are good boys and girls, and they deserve at least one new off-leash park, city staff concluded following public engagement on the issue. OK, the first half of those findings may have only been implied.
Nov 16, 2020 12:38 PM By: Dustin Godfrey 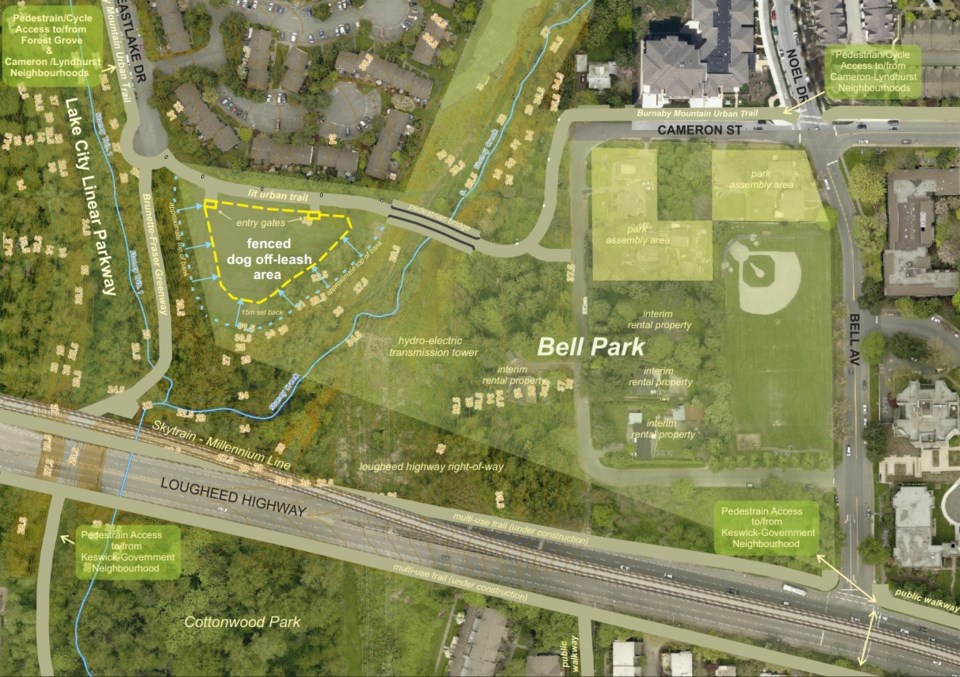 This map shows where the proposed off-leash area would go in Bell Park in northeast Burnaby.City of Burnaby

Dogs in northeast Burnaby are good boys and girls, and they deserve at least one new off-leash park, city staff concluded following public engagement on the issue.

OK, the first half of those findings may have only been implied. Last year, the city engaged residents in northeast Burnaby neighbourhoods about the potential for new off-leash parks at two sites – Bell Park and Keswick Park, both in the area of the City of Lougheed development.

Residents responded resoundingly in favour of the Bell Park site at in-person consultations. Of the 97 households that participated in the two April 2019 open houses at Cameron Recreation Centre, 77% expressed support for the Bell Park proposal, while 53% supported the Keswick Park proposal.

In a report to the city’s parks commission, staff said the support for a Bell Park off-leash section was due to its central location for target neighbourhoods, its distance from busy roads and its accessibility by walking, cycling and driving.

“Based on past experience and knowledge of conflicts with a neighbouring seniors residence at David Gray Park, it is essential that the residents of the seniors complex next door to Keswick Park be consulted regarding the proposed potential off-leash area at Keswick Park,” staff wrote in a report to the commission.

However, while the city consults with the seniors’ complex, staff suggested the city run a two-year trial off-leash area at the park.

Staff also pointed to another potential spot for the commission to consider implementing an off-leash area in northeast Burnaby: Forest Grove’s Maple Grove Park. Streamkeepers have told the city local dogs walking off-leash at East Grove Park have disturbed salmon spawns in the Stone Creek tributary, staff noted, adding the city has also had requests from Forest Grove residents for an off-leash park.