As other Lower Mainland residents agonize over the ongoing housing crisis, a group of Burnaby high school students is tackling the region’s livability on a much tinier scale.
May 11, 2018 5:59 AM By: Cornelia Naylor 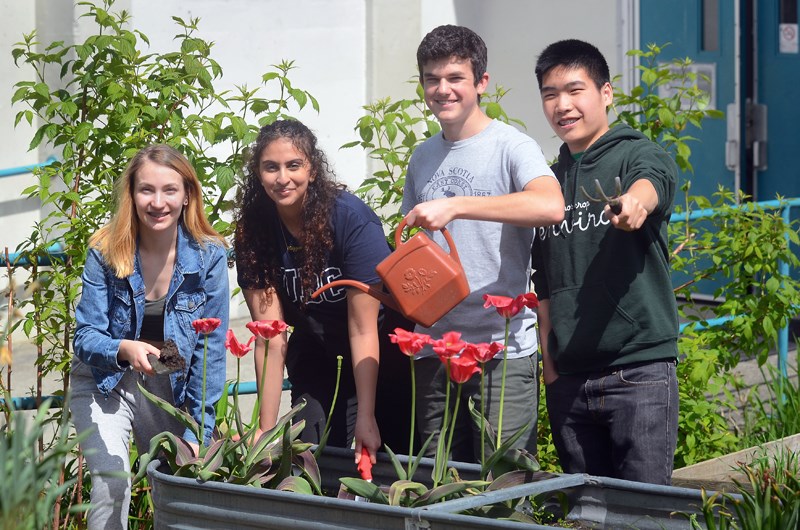 As other Lower Mainland residents agonize over the ongoing housing crisis, a group of Burnaby high school students is tackling the region’s livability on a much tinier scale.

Members of Moscrop Secondary School’s environmental and gardening clubs have worked to make their school more livable for bees and other pollinators and are encouraging other schools to do the same.

Last month, the school was designated the first Bee School in Greater Vancouver and only the second in the province by Bee City Canada, an organization dedicated to inspiring cities, towns, First Nations, schools, businesses and other organizations to take action to protect pollinators.

Moscrop environmental club co-chair Brennan Strandberg-Salmon said he has been interested in pollinators ever since learning about their importance in Grade 6.

“A fact that really stuck with me is every one in three bites of food that you put into your mouth was made possible because of pollinators and because of bees,” he said.

To be designated a Bee School, Moscrop had to create a Bee School working group to put together a pollinator habitat action plan, develop a plan for pollinator education and awareness and arrange for their principal, Paul Fester, to sign a resolution declaring the school’s support for pollinators.

To make the school more livable for bees, students in the environmental and gardening clubs have planted bee friendly plants in the school garden and installed a bee-bath station and two mason bee condos.

But they’ve stopped short of pushing for honey bee hives on campus.

“We’re not completely sure that people would be willing to have that, especially our principal and other staff members and parents, just because of concerns about having a bunch of bees around the school … We’re more focused on native pollinators; that’s why we have the mason bee condos,” Strandberg-Salmon said.

As far as the Bee School designation is concerned, though, Strandberg-Salmon said the clubs have gotten strong support from the school’s administration, biology teacher Katherine Lange, social studies teacher Nicola Gillam and chemistry teacher Mark Sidney, who is also a beekeeper.

The Moscrop students have also reached out to the City of Burnaby to pursue a Bee City designation but have yet to get traction with city officials, according to Strandberg-Salmon.

Representatives from Moscrop’s Bee School working group will be on hand at the Stoney Creek Environment Committee’s Great Salmon Send-Off at Stoney Creek Elementary School (2740 Beaverbrook Cres.) on Saturday, May 12 from 10 a.m. to 2 p.m.