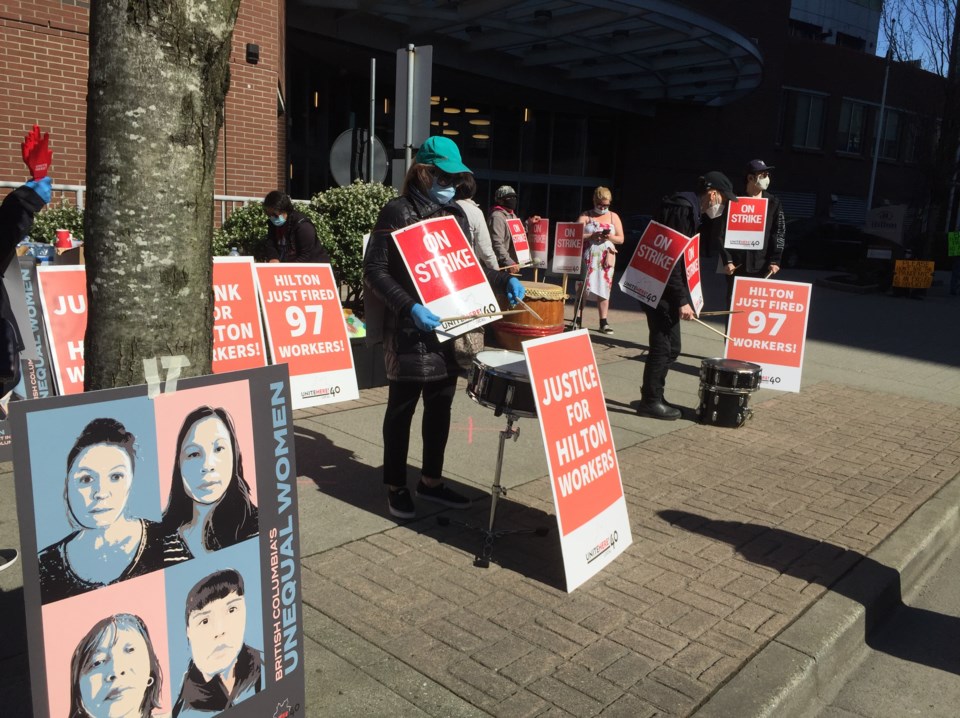 Over a dozen Hilton Metrotown workers have walked off the job this morning after nearly 100 long-term hotel employees were laid off this month.UNITE HERE Local 40

Hilton Metrotown has cut off almost 50 of its laid-off workers’ employment insurance benefits after locking out workers, the union says.

This comes as the hotel’s lockout enters its third week and affects those who have been out of work for months.

The hotel locked out room attendants, front desk agents, banquet, and kitchen staff on April 16 after terminating 97 long-term workers in what the union called, “mass firings.”

The workers are represented by UNITE HERE Local 40.

Affected workers have been cut off for nearly two weeks. The union has launched an online petition calling on federal Employment Minister Carla Qualtrough and MP for Delta, to intervene and protect laid-off Hilton Metrotown workers.

“Workers who are locked out receive lockout pay and are not eligible for EI,” said a news release. “However, Hilton Metrotown has begun notifying laid-off workers who should continue receiving EI that their employment benefits have been paused because of the labour dispute. This impacts workers who have not worked a shift at the hotel in more than eight months. Most of them were laid off when the pandemic struck.”

“I’m deeply hurt and angry that Hilton Metrotown cut off our EI. I’ve only worked a few shifts, and EI still wasn’t enough to make ends meet during the time I was laid off. It’s clear that they’re trying to demolish our livelihoods and ability to feed our families. First you fire workers, then you lock us out. Now you’re cutting off our legal government assistance. Hilton Metrotown, how dare you treat your loyal workers like this during a pandemic. Have you no shame?” said Kelsey Paul, a front desk agent who has worked at the hotel for 11 years.

Last week, the City of Burnaby passed a motion in support of the locked-out workers — with one councillor calling the hotel’s actions “despicable” — urging the hotel to end the lockout and return workers to their jobs as business resumes.