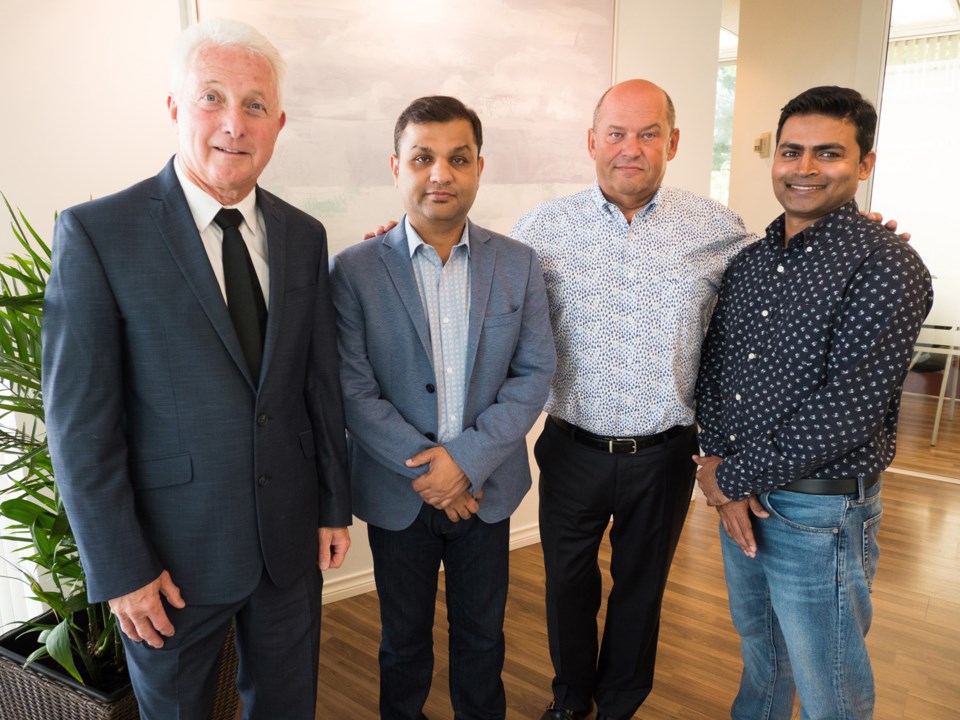 A research lab that aims to identify marijuana molecules that can be turned into non-addictive pharmaceutical drugs will soon be open in Burnaby.

The lab is being built by Medipure Pharmaceuticals in a Discovery Parks building on the east side of the B.C. Institute of Technology campus.

The company expects to be moved into the new space by the end of this week, with an official opening of the new lab planned for January.

Medipure plans to scientifically explore the medicinal benefits of cannabis.

“Physicians have known for many, many years there are health benefits from various molecules within this plant, but there’s never really been any significant data. Everything’s been anecdotal,” said Boris Weiss, chief executive officer of Medipure. “The big, open door was actually to look at this as a pharmaceutical product.

“You’re talking about providing the physician with the opportunity to prescribe something that is not opiate based, that does not have the significant side effects of opiate use, the addiction.”

And, he adds, avoid the need to keep increasing the dosage of the addictive painkillers, eventually rendering them ineffective. If these drugs can become reality it would be a big benefit in the global war against the opiate drug problem, he says.

“How do you solve that? You solve that by creating something, at least on a prescription level, that doesn’t hook these people,” said Weiss.

Medipure’s chief scientific officer is Nihar Pandey, who has a doctorate in biochemistry. A few years ago, he published a paper from research he had done at the University of Ottawa on a compound that was being used to treat diabetes. He said when his team did testing on animals they noticed the diabetic animals were anxious. But when they were treated for diabetes and obesity, the anxiety disappeared. So they tried to figure out why and discovered a molecule, known for being a cannabinoid (active compounds found in marijuana), that was impacting a receptor in the animals. When they treated the animals with the cannabinoid molecule they got a good result.

Pandey said, so far, 114 molecules in the cannabis plant have been identified and categorized. He is confident some “very good results” will come out of the Burnaby lab.

“These molecules are working, they’re not addictive,” said Pandey. “We are very much sure we are going to reach some milestones in these areas.”

Pandey added the molecules have the potential to be converted to pharmaceuticals to treat inflammation and skin care conditions.

Research on cannabis is in its infancy, said Weiss and Pandey, because the drug was illegal and couldn’t, theoretically, be made available for testing since marijuana
had been banned all over the world.

“Historically, everybody knew about the potential, but there was no scientific data,” said Pandey.

Weiss said the BCIT building was developed by the provincial government with medical research and innovation in mind. Its HVAC system and infrastructure are conducive to running a research lab.

“Basically, they tried to create an incubator for research and development, and they put it in Burnaby,” said Weiss. “It’s a great model for research companies.”

Weiss said big pharmaceutical companies have moved away from doing early stage research in-house because it’s expensive when part of a huge operation. That has opened the door for companies like Medipure, a North Vancouver-based company started in 2014.

“They found for them to do the same things we do costs eight to 10 times more,” said Weiss. “So they’ve turned to companies such as Medipure and they say, ‘We will take over once you’ve gotten it past the initial phase, from Phase 1 to Phase 2 trials, and we will come in with our additional capital and additional marketing expertise and manufacture.’ So that’s our (business) model.”

Weiss said the model is gaining credence inside and outside the medical community. The company’s medical director is Dr. John Maynard, who has been chair of Vancouver Coastal Health’s medical advisory committee.

“John is all over this. He sees opportunity to help people,” said Weiss. “He’s never been in a commercial entity in his life and he welcomes this with hands and feet in. He’s 100 per cent on board that this is going to make a significant difference medically not only in Canada, but globally.”

The company also met recently with Vancouver city councillor Kerry Jang, who is also a psychiatry professor at the UBC faculty of medicine. Mayor Gregor Robertson has put Jang in charge of an opiate task force.

Pandey said the 2,400-square foot lab will initially have four technicians and four research PhDs with an annual operating budget of about $2 million. Renovating the space will cost about $300,000 with the equipment pushing $1 million.

Since it’s a full narcotics research lab – researchers have to be able to compare their results to those of powerful painkillers like Oxycontin – it will be subject to stringent Health Canada security protocols.

Weiss said Medipure is also looking for additional lab space for another project with a California oncology pharmaceutical company.