Burnaby RCMP Cpl. Freda Fong says speaking Mandarin and Cantonese as well as English has helped her as an investigator and as a support to victims, like the family of murdered 13-year-old Marrisa Shen
Apr 14, 2021 1:10 PM By: Cornelia Naylor 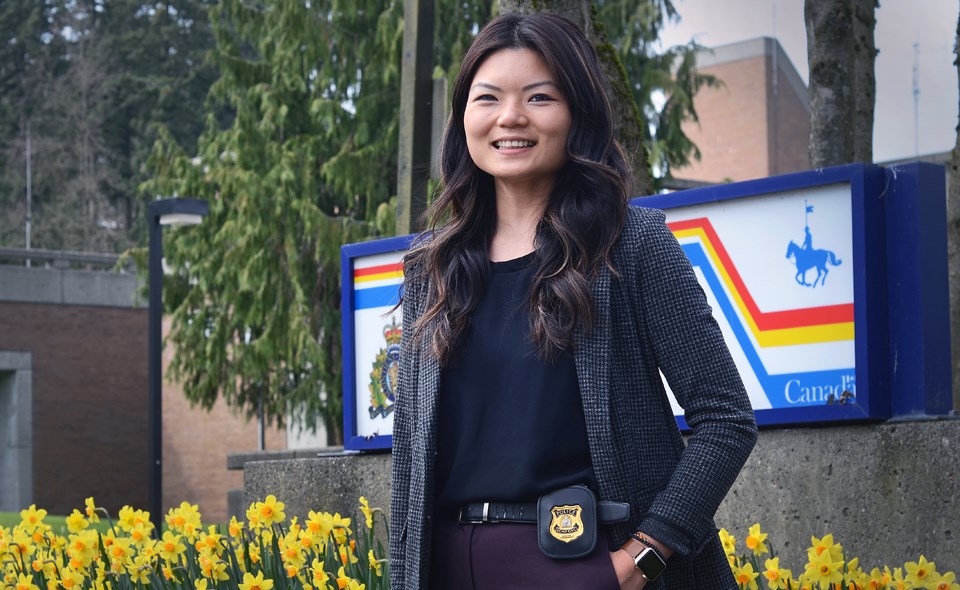 For Burnaby RCMP Cpl. Freda Fong, a diverse police force is about equity and justice – but it’s also just about better policing.

When investigators arrive at a crime scene, some evidence – an item of clothing dropped by a fleeing suspect, for example – needs to be documented right away before it changes, someone moves it or it disappears.

If the witnesses who could point out those important bits of evidence don’t speak the same language as the investigators, vital information can be lost, Fong says.

“There’s so many times where I truly felt like, ‘Hey, if no one could speak to this family today or this victim today, no one will know the truth of what actually happened, and it’s because they couldn’t express themselves,'” she says.

Fong, who is fluent in Cantonese and Mandarin, is one of more than 120 Burnaby Mounties who speak at least one language besides English, and she has no problem coming up with a slew of examples to show how that has helped in her policing work.

When she was still a general-duty cop and pretty new to policing, she remembers a sergeant at the Burnaby RCMP detachment pulling her into a room and asking her to listen to a wiretapped conversation between two kidnappers.

“I hear two people speaking in Cantonese,” Fong says. “They’re talking in code a little bit, so they’re saying, ‘Hey, I’ll give you the red pocket once you finish her off’ – something along those lines.”

Besides providing a translation to the investigators, she was able to explain that the “red pocket” was common Chinese slang for money or payment.

“Because the person doesn’t speak English, all they can do is call 911, and all we hear is panic over the phone.”

Once she arrives at the scene, however, Fong says the relief is often immediate.

“Just because you have the same face almost, it completely alleviates that panic,” she says, “and then they can express to you, ‘Oh my gosh, this is what happened. I’m so glad you’re here. I couldn’t tell them.’”

Sometimes, though, the only relief she has been able to provide to victims is clear communication in the very worst of circumstances.

After 13-year-old Marrisa Shen was found murdered in Central Park in July 2017, Fong – who by that time was working with the Integrated Homicide Investigation Team – was appointed to act as liaison to her Chinese-speaking family.

“Half the battle for these families that are grieving is the language barrier and not knowing what the police are doing,” Fong says. “Their world is already turned upside down; it’s already a blur for them, so if we can give them a familiar face, it goes a long way, and I’ve see that first hand.”

While the RCMP can and does use translators, Fong says having officers that come from a variety of backgrounds and speak a variety of languages is more effective, both from a practical and a societal perspective.

Practically speaking, she notes a Cantonese- or Tagalog-speaking officer interviewing a  witness will know what kinds of follow-up questions to ask, while an interpreter won’t.

Looking at the bigger picture, Fong says all government institutions, including the police, need to be “demographically representative” of their communities to work against systemic racism.

“I always tell myself I won’t change the way I am to suit the work,” she says. “I’m going to bring part of my background and culture and my personality and compassion to the work because that’s how real change happens.”