Even after pulling a kindergartner safely from the path of an oncoming car last month, nine-year-old Tony Leong has yet to earn the right to walk to school by himself.
Jun 27, 2018 11:58 AM By: Cornelia Naylor 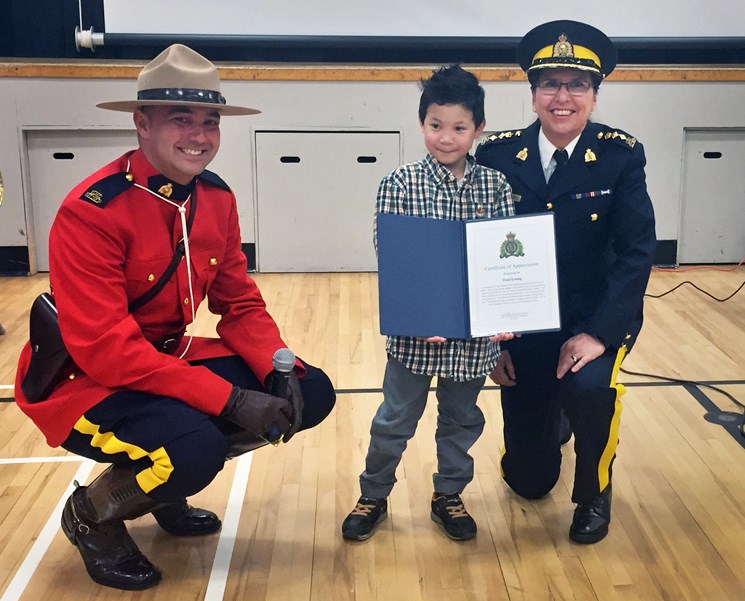 Even after pulling a kindergartner safely from the path of an oncoming car last month, nine-year-old Tony Leong has yet to earn the right to walk to school by himself.

The Douglas Road Elementary Grade 3 student has been bugging his mom for permission to walk to school by himself all year long, according to veteran crossing guard Kelly Engleson.

“Every day, with a big smile, he says to me, ‘Am I ready yet, Kelly? Am I ready?’” she said.
“And I say to him, ‘Well Tony, you need to show mom that you are capable and have the ability to walk across the street and focus.’”

On May 31, he proved he might well be ready for the responsibility.

Tony had been walking from school with his mom and big brother on Douglas Road with a group of younger boys ahead of them, Engleson said, when a car “flying” into the neighbourhood gas station apparently failed to see the youngsters on the sidewalk.

“I turned and I yelled, ‘Stop! Watch the car!’” Engleson said, “and Tony instantly grabbed the back of the little boy’s coat in front of him. The little boy was in kindergarten and he would have absolutely gotten hit if Tony had not grabbed him.”

The pint-sized hero still isn’t allowed to walk to school by himself, according to the crossing guard, but, on Monday, his school got a visit from Burnaby’s top cop, Chief Supt. Deanne Burleigh, who recognized his brave act with a certificate of appreciation at a school assembly.

“You kept yourself safe as well as those around you,” states the certificate. “The world needs more people like you – never lose your bravery and courage to help those in need. And maybe one day, the Royal Canadian Mounted Police will be lucky enough to have you as one of their police officers.”

Engleson, who recommended Tony to the City of Burnaby for a citation, said the recognition was well-deserved.

“All the adults were crying,” she said. “Everybody just clapped for a good minute for him.”