Burnaby partners with TransLink to speed up transit along ‘congested’ Hastings 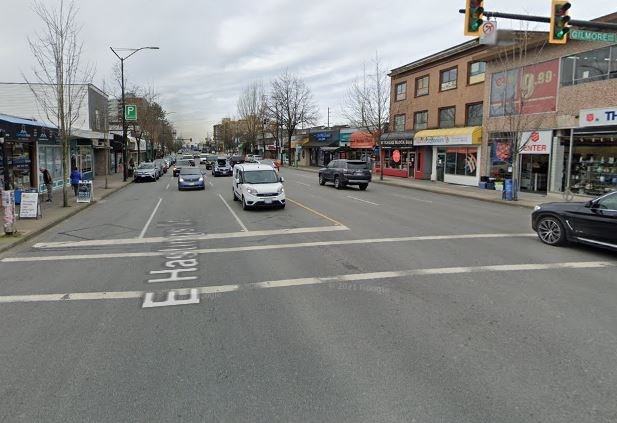 The City of Burnaby and TransLink are partnering on a project aimed at speeding up transit along the “congested” Hastings corridor.

The proposed project would extend the full length of Hastings Street in Burnaby, from Boundary Road to Duthie Avenue.

A city staff report says TransLink will fully fund and lead the conceptual design phase of the work, including technical work and public engagement, expected to begin this fall. As for construction costs based on this process, that would be left up to further negotiations.

“Hastings Street plays a critical role in the transportation network supporting the safe and efficient movement of people and goods across Burnaby and the region,” says the report. “Notwithstanding the corridor's importance, the current facility's design is challenging for all users. Congestion on the corridor creates delays for vehicles and public transit, and the narrow public realm limits opportunities for pedestrians, cyclists and street activation.”

One side impact of Hastings congestion is many commuters will turn off and take side routes along quiet residential streets in such areas as Capitol Hill and the Heights – with residents saying these “ratrunners” drive at high speeds, creating safety issues. Many of these side streets have seen speed humps added, but often drivers will just go to the streets that don’t have them.

“Cars are the most numerous vehicles,” says the report, but transit moves more than one-third of the people along the corridor, while representing “less than 1% of the vehicles. Buses, which are subject to congestion from the cars, experience delay and reliability issues.”

One stumbling block for any changes is the way the Hastings corridor is designed.

“Hastings Street is a constrained corridor, in that the businesses and homes on either side leave little room for widening of the roadway or public realm,” says the report. “Many functions compete for this constrained space. Most of the space is currently used for the movement and storage (parking) of vehicles, including all modes to varying degrees.”

Some amenities to improve the character of the street, according to the report, include trees, benches, bike racks, and decorative lighting.

The city recently made street changes on Hastings in Burnaby Heights so businesses could seat customers outside. Those new patios are blocking HOV lanes, but are considered temporary.