The City of Burnaby is looking at cutting in half the rate property owners would pay in contributing to a city initiative to expand the storm sewer system.
Nov 6, 2020 3:18 PM By: Dustin Godfrey 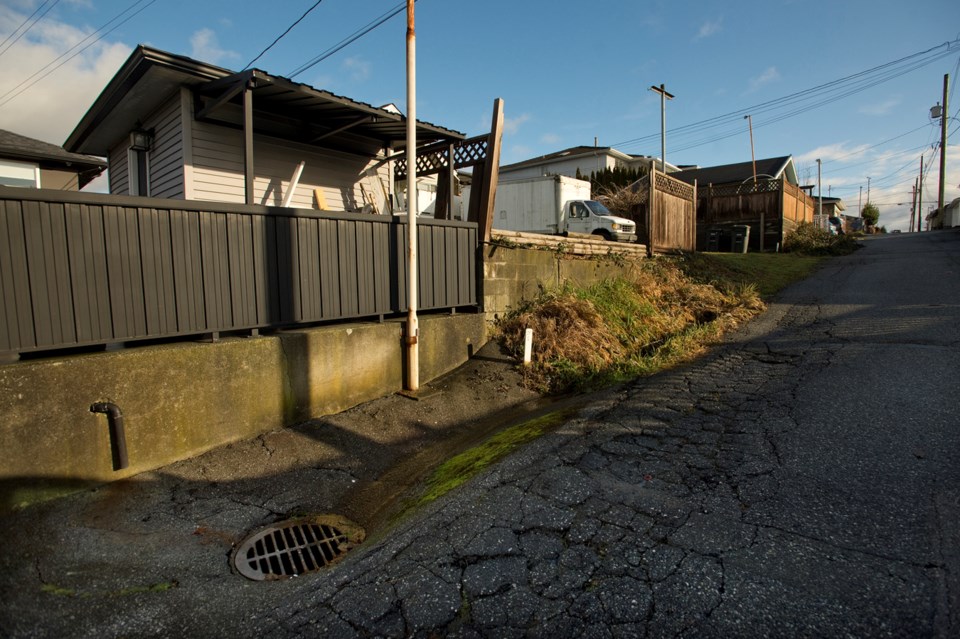 The City of Burnaby says the homeowner Dave Hayre has to pay for a portion of this ditch to be turned into a modern storm drain sewer when he redevelops his property.Jennifer Gauthier

The City of Burnaby is looking at cutting in half the rate property owners would pay in contributing to a city initiative to expand the storm sewer system.

Roughly 20% of residential lots – about 6,000 of the city’s 30,000 lots – have no existing storm sewer service. For those properties without storm sewers, stormwater has been drained through rock pits or ditches, which staff noted, in a late-2016 report, had “varying but typically poor performance.”

The implementation of storm sewers has been piecemeal work, with the city waiting to create the sewers for each residential block until a property owner seeks a building permit for a project exceeding $250,000. Prior to 2017, the city billed that property owner for the first 47.5 metres of the storm sewer on that block, and the city would cover the remainder.

Staff suggested the city continue the same scheme but also recover the remainder of the costs from the other property owners on that city block when the city receives development applications for those properties.

In early March 2017, council passed a bylaw that would implement the change, but earlier this year, the bylaw received criticism from property owners.

After he was hit with a bill of $33,277 for his contribution to the storm sewer extension on his block, Dave Hayre told the NOW in January and then again in August of this year that it was “unfair” and "unethical" for the city to download the costs onto property owners. Hayre was seeking to tear down and replace his home on Napier Street in Willingdon Heights.

According to an October 2020 report to council, the program cost has been on average about $22,000 to the 550 properties that have benefited from a storm sewer extension since 2017. That’s before paying for lost interest, a cost that is passed on to property owners.

The city digs into its reserves to pay for the projects, meaning that funding could otherwise be gaining interest. Staff said it’s likely full costs from all benefiting property owners would not be recovered for more than 40 years, which could add up to a fairly significant accumulation of lost interest.m

Staff noted the city continues to receive comments that property owners “feel that this storm extension service cost is still too high.”

Staff conducted a “thorough review and evaluation” of the options to the city and have suggested the rate be shared half and half between property owners and the city. This cost-sharing ratio is in line with other local area service programs, according to the city.

In October, the financial planning committee was set to make a decision on whether or not to recommend the city split the cost 50/50 with property owners, but the matter was deferred to November.

Mayor Mike Hurley said he received information at the last minute regarding the issue, and the committee directed staff to fact check the information and bring the report back this month. Hurley declined to elaborate on what the last-minute information included.

If passed, the new bylaw would include a refund of half the cost to those who have paid the full cost since 2017.