On average, Vancouver still offers the most expensive places to rent in the country.

It's still expensive to rent in Burnaby, a new report shows.

Burnaby's rates are the sixth highest in Canada, the report says.

Compared to a year ago, a one-bedroom in the city has gone up by 20.2 per cent, while a two-bedroom has increased by 22.2 per cent.

Ahead of Burnaby for national prices are Victoria, Toronto, Richmond, North Vancouver and Vancouver.

The 35 cities across Canada cited in the report combine for averages of $1,640 for a one-bedroom and $2,098 for a two-bedroom rental. 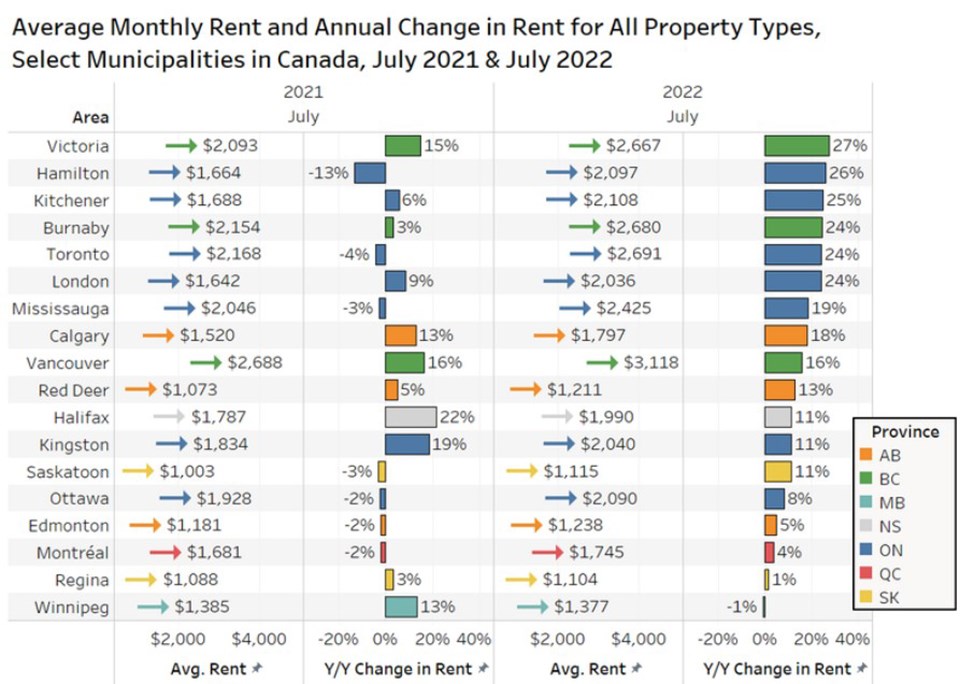 "The average rent for all property types based on Rentals.ca listings is now up by double-digits annually after rising 2.6% month over month in July 2022. However, average rents are still slightly below the previous market peak in late 2019 before the pandemic," the Rentals.ca report says.

"The two major factors impacting rental rates is the continued return to the office which has boosted rents in the most expensive central markets in Canada, and the recent increase in interest rates which reduces the affordability of ownership housing, and causes uncertainty for would-be buyers worried about future price declines.

"The pace of growth in the rental market will continue to be impacted by interest rate increases, and how many units of ownership housing units are listed for rent as would-be sellers become discouraged with the state of the resale housing market and put off listing their property for sale."