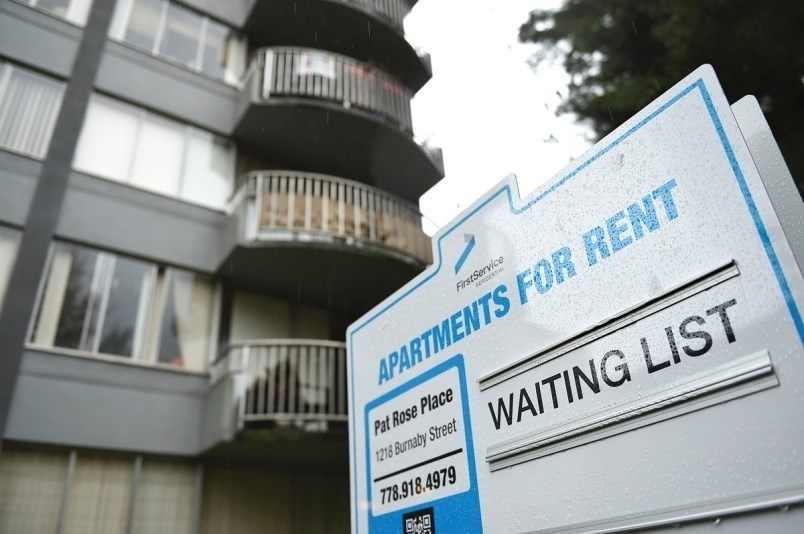 Residential rents in Burnaby and beyond will drop early in 2021, but then rise about three per cent, according to a new report.

The average monthly rent for all Canadian properties listed on Rentals.ca in November declined 9.1 per cent annually to $1,743, making a 180-degree turn when compared to an increase of 9.4 per cent this time last year, according to Rentals.ca’s and Bullpen Research & Consulting’s latest National Rent Report.

“Bullpen Research & Consulting and Rentals.ca is forecasting rents will increase 3 per cent annually in Canada in 2021,” said a news release. “Rents will continue trending downward in the first half of 2021 but start a slow recovery in the second half of 2021.”

Forecasts for average monthly rent for five Canadian cities from December 2020 to December 2021 include Vancouver, up 3 per cent; Toronto, up 4 per cent; Montreal, up 6 per cent; Calgary, flat in 2021; and Mississauga, up 2 per cent.

Rents for a one- and two-bedroom were down slightly month over month in November. Year over year, average monthly rent for a one-bedroom was down 5.2 per cent and 13.8 per cent for a two-bedroom.

Vancouver rents declined 12 per cent in November, while they were up 7 per cent the same time last year.

The downtown markets in Vancouver and Toronto have taken the biggest hits and like other metro rental markets are affected by a lack of immigration, fewer students renting, and fewer new graduates renting their first properties -- so demand is way down, the report said. But supply is way up, with former short-term rentals now being offered in the long-term rental market, and new unit completions on the rise.

Condominium apartments in Canada have seen the biggest drop among all property types this year with average monthly rents falling 19 per cent annually to $2,038 from $2,508 in November 2019.