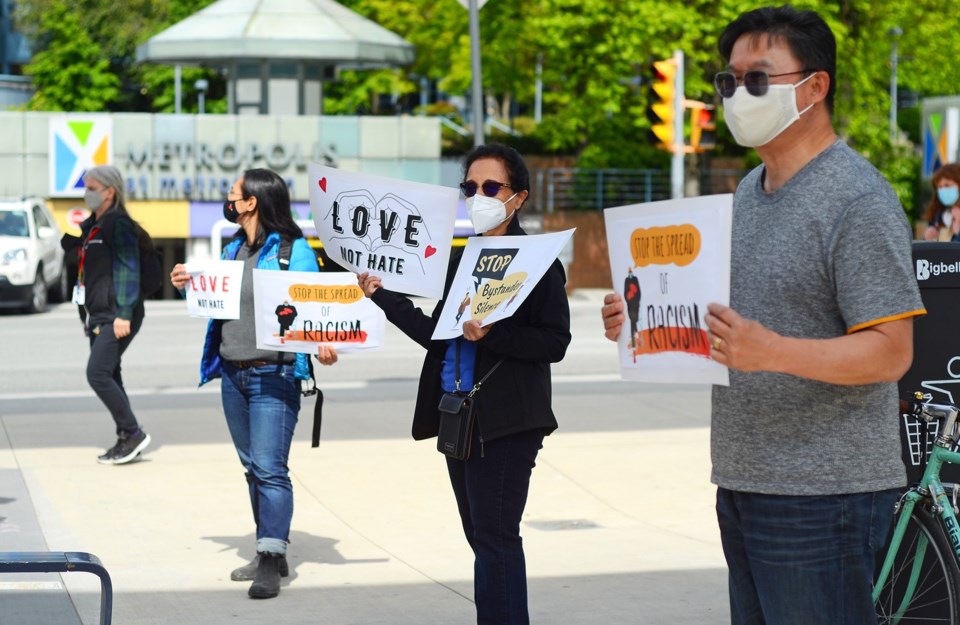 With anti-Asian hate crimes skyrocketing in Burnaby, a local resident decided she needed to take action.

Burnaby resident Doris Mah and the group she founded, Stand With Asians Coalition, recently made a plea to the city to proclaim May 10 as a Day of Action Against Asian Racism.

Burnaby Mayor Mike Hurley and council passed the proclamation at the end of April, noting May is Asian Heritage Month in Canada.

The proclamation reads, in part, "Every resident in Burnaby deserves safe public spaces without the fear of discrimination based on race, national or ethnic origin, colour, religion, sex, age or mental or physical disability."

According to Burnaby RCMP, there has been a 350% increase in anti-Asian hate crimes during the first year of the COVID-19 pandemic.

That prompted Mah to organize rallies for May 10 throughout the Lower Mainland, which included teams in Vancouver, the Tri-Cities, Burnaby, Mission and Hope.

“It went really well. The weather was fantastic,” she said of yesterday's events. “We had 14 teams from Vancouver, Tri-Cities, Burnaby, Mission and then Hope.”

In Burnaby, teams were located at the Metrotown SkyTrain Station, as well as Brentwood and Lougheed stations.

“People heard from the news and people actually showed up at different locations, out of the blue,” Mah said. “We don’t know who they were, but we know they’re allies.”

While she accomplished her goal of the getting the city to help raise awareness around the issue, she didn't stop there. Mah sent out 1,000 emails to cities and municipalities across Canada, with 30 responding and wanting to have proclamations also declared in their areas.

“I have Ontario cities phone the [Burnaby] mayor's office and say ‘hey, saw this email from this woman saying you’ve got this proclamation, can you send us a draft? What do you say on it? because we want to do the same.'"

Mah was incredibly touched to see many attend the events she organized, which helped her see there are more people that stand with the Asian community than she thought.

“It was really heartwarming to see that there were so many of us out there," she said.

“This is when people come together and say ‘we’re all in this together’ because we are all hurting. We’re not pointing fingers, we’re just demanding the government to have stronger action.”

The social planning committee for the City of Burnaby approved another motion on May 4 as a result of Mah's advocacy to look at the possibility of developing an anti-racism task force, which would look similar to the Mayor's Task Force on Housing.

She hopes going forward, her actions can benefit other communities struggling with the same struggles.

“I really hope this could be a model for other cities across the country," she said.