Burnaby residents are apathetic about the overdose crisis. This group wants to change that.

Dialogue sessions hopes to educate residents and begin 'ripping away that veil of ignorance'
Sep 20, 2018 3:45 PM By: Kelvin Gawley 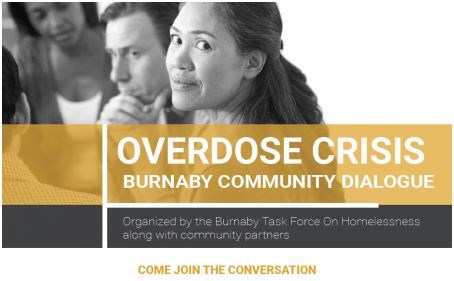 Burnaby and New Westminster residents appear apathetic in the face of an overdose crisis that has killed dozens of their neighbours and thousands of their fellow British Columbians over the last three years.

Of the 1,450 overdose deaths recorded in B.C. last year, 68 were in one of the two cities. That statistic is on pace to repeat this year.

But a recent survey from the Greater Vancouver Board of Trade found Burnaby and New Westminster residents (grouped together in the data) ranked the overdose crisis as the least important issue in the upcoming civic election.

A series of dialogue sessions will seek to change this attitude and elevate the opioid crisis in the minds of everyday people.

The four events, scheduled throughout the city this fall (see end of story for details), will welcome residents from all backgrounds to learn about drugs, services available for drug users and some of the common misconceptions surrounding the topic. There will be volunteers who speak at least 10 languages (English, Arabic, Cantonese, Mandarin, Farsi, Korean, Spanish, Tigrinya, Urdu and Punjabi) on hand to help guide conversations.

Organizer Karen O’Shannacery said a key goal of the series will be to address the stigma associated with drug use. She hopes the conversations will begin “ripping away that veil of ignorance” many people have.

O’Shannacery, with Burnaby’s Society to End Homelessness, said there remain large swaths of the population who don’t appreciate the gravity of the overdose crisis.

“A lot of people don’t understand it, don’t know about it and they think it only affects very, very few people,” she said. “And there’s judgment with that.”

O’Shannacery said even she was surprised to learn the vast majority of overdose deaths happen when someone is using alone indoors. Knowing information like this can save lives, she said.

“Nobody wants to open the door of the washroom or the bedroom and find their son [or] their partner dead. It’s devastating.”

The dialogues will also address the connections between addiction and doctor-prescribed painkillers, as well as mental illness and the shame that drives many drug users to hide their habit.

The sessions will be presentations from mothers of addicts, someone with lived experience and the region’s medical health officer, but there will also be opportunities for roundtable discussions among attendees.

They will also learn to use naloxone – the overdose-reversing medication.

The Overdose Crisis Burnaby Community Dialogues will include meals provided and available childminding upon request during registration. Registration is free but space is limited. Call 604-200-0712 to register.