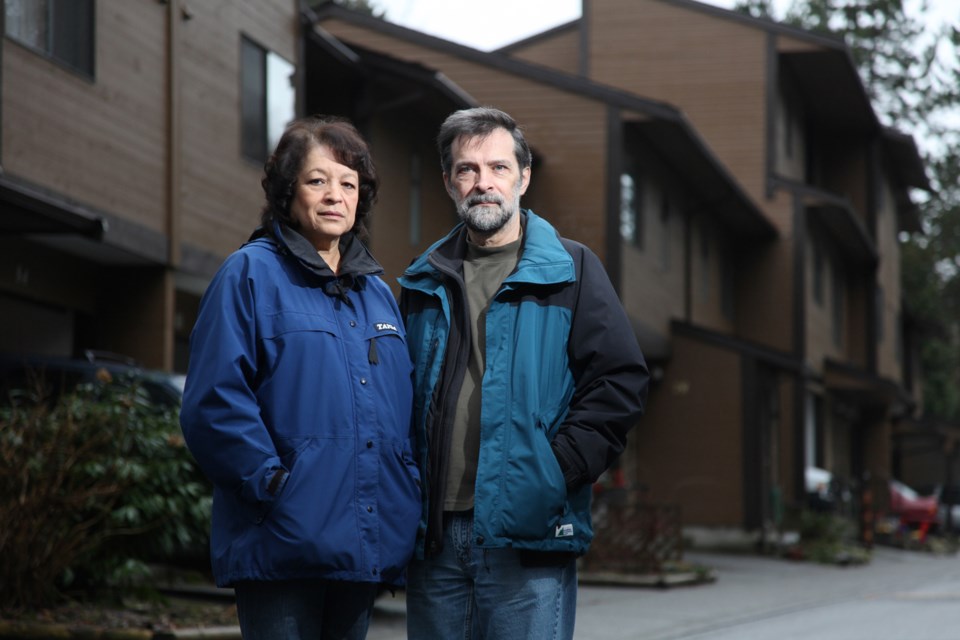 Glen and Catherine Porter live in the Pine Ridge Housing Co-operative in Burnaby, which has an operating agreement expiring in 2017 with the federal government. The couple is worried it means many low-income neighbours relying on the subsidy will face "economic evictions."Jason Lang/BURNABY NOW

Burnaby residents living in federally subsidized housing co-operatives are facing an uncertain future as the co-ops grapple with a possible post-subsidy environment.

Close to one-third of residents living in every co-op rely on federal subsidies through social housing agreements, and most agreements are expiring in Burnaby over the next seven years. There is no plan in place for their renewal.

Catherine Porter, president of Burnaby's Pine Ridge Housing Co-operative, says many members have approached her about having to leave the neighbourhood when their co-op's agreement reaches maturity in 2017.

"I moved in as a single parent in the early 80s, when rents and mortgage rates were at stratospheric levels in Vancouver and I needed to find a more affordable option," Catherine told the Burnaby NOW. "Several members have expressed their concerns to me about the loss of subsidy and their inability to pay the housing charges without it."

The city is home to 26 non-profit housing co-operatives, with 1,900 units. Eleven of those are under the section 95 federal program, with operating agreements coming to an end in the next seven years. Another 12 are also under federal programs, many also expiring during the same time period. Every co-operative housing model is different, depending on how each was set up.

One thing they do have in common, is one-third of the residents who would otherwise struggle with the growing costs of housing, are able to make rent thanks to the rent-geared-to-income subsidy available to assist lower-income members.

"Twenty-eight per cent of our current members require assistance to pay the housing charge," Catherine said. "The co-op charges members only what is required to properly run operations and maintain the property. That's the affordability factor. There isn't any profit built into the charges. Even so, the co-op is aging and costs rise."

Glen Porter, Catherine's husband, moved in with her family later on and the couple does not rely on the subsidy. He said the real fear is watching neighbours have to leave the co-op just because they can't afford it when the agreement matures.

"That's the worst possible scenario," he said. "If they did have to leave the co-op, what we would call an economic eviction, would be a process. If they couldn't pay the housing charge, then technically they would become homeless. If they can't find another place, the government of the day and the provincial government of the day would be in a position of having to find housing for them."

Scott Jackson, spokesperson for the Co-operative Housing Federation of Canada, said his organization is putting together a campaign to raise awareness about this issue.

"We're saying the government needs to keep its money on the table, and not pull itself completely out of housing," he said. "We need to keep this great legacy of affordable housing ... going. At the very least, we shouldn't be rolling backwards - making it harder for people in the most vulnerable situations. These are seniors, new Canadians, people on fixed incomes. These people are very seriously concerned and stressed about where they're going to be living and how they're going to afford a home in a few years."

Jackson said the federal government, and the Canada Mortgage and Housing Corporation (CMHC) handling the mortgages for each co-op, have been fairly quiet on the future of co-operatives.

"They haven't been public with any of that, they haven't released any of their discoveries - what they've found looking at this problem," he said. "The general line of thinking is we're hearing from the CMHC ... is they're still coming out of their mortgages and they're going to be OK. They (co-ops) still have lots of money."

Jackson noted that many of the co-ops have been operating for 25 to 30 years, and many require upgrades, which do not come free.

Thom Armstrong, executive director of the Co-operative Housing Federation of B.C., said at least 400 households in Burnaby will be affected by losing federal assistance.

"Between now and 2020, more than 3,000 households in B.C. will lose the assistance that currently makes their home affordable," he added. "We'll be looking to both the federal and provincial governments to tackle this critical issue in their upcoming budgets so that the housing crisis in B.C. won't get even worse.

However, the federal government maintains that housing co-operatives will have some money leftover after the operating agreements and mortgages mature - despite the outcry.

Although Minister of State for Social Development Candice Bergen did not answer any of the Burnaby NOW's questions, a ministry spokesperson provided some comment.

"At the end of these agreements, the government will have fulfilled its commitment and funding will end," said Karine J. LeBlanc. "At the same time, the mortgages on the properties will generally be paid off, allowing many housing groups to continue to provide affordable housing and to be free to operate their projects as they see fit. Collectively, housing groups will find themselves with billions of dollars in real estate assets, which they can use to best meet the needs and priorities of their communities."

In the 2009 to 2011 economic action plan, the federal government invested $2 billion to build new and renovate existing social housing, resulting in more than 15,000 projects across Canada, including 858 in B.C., LeBlanc noted.

Burnaby council recently added its voice with the Federation of Canadian Municipalities calling on the government to develop a long-term plan to fix Canada's housing crunch by working with local communities.

As for Catherine, she said co-ops planning a future without a subsidy have already had to limit the intake of new members whose income is too low to pay the full housing charge.

"This is quite alien to us as our inclination has always been to serve the community by providing affordable housing to all," she said. "It also does not address the issue of current members who won't be able to pay the charges."

- The Norman Bethune Co-operative Housing Association with 24 units will have the first federal operating agreement to expire in Burnaby in 2015.

- The federal government currently provides subsidies for more than 68,000 households in B.C. worth $170 million annually through federal social housing agreements.

- One in four Canadians pay more than they can afford for housing, and mortgage debt held by Canadians now stands at more than $1.1 trillion.