A Burnaby driver urges people to be patient around construction sites
Feb 20, 2021 5:21 AM By: Chris Campbell 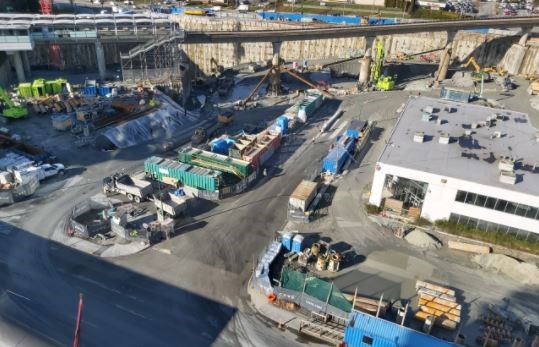 Construction in the Gilmore area of Burnaby.Contributed

The frustration of drivers fed up with being stuck in delays due to construction projects is being blamed by the victim of a “scary” road rage incident this week.

The NOW was contacted by Martin, who was driving with his spouse and two toddlers in the area of Dawson Street and Gilmore Avenue, an area that is seeing a large construction project next to the Gilmore SkyTrain station.

Martin said he accidentally cut off another driver and while he was trying to apologize was threatened with a “baton” by the aggrieved driver.

“It was super congested with vehicle traffic,” said Martin. “As I waited, I took a look in my rear-view mirror and saw a very angry man getting out of his black sedan and swinging an extendable baton in order to get it to full length. I hit the gas and drove 50 yards down the driveway to a neighbouring building as my family was in the vehicle with me. I stopped and looked in my rear-view mirror and he was yelling furiously while making body gestures. I called the police and he got in his car and turned into the underground parking of the neighbouring building.

“I was extremely shaken and did my best to give a suspect and vehicle description. Several police officers arrived within two minutes, and I gave them the pertinent details before taking my family home … I'm a little jittery but glad I looked in the rear-view mirror at that moment and avoided harm to them or my vehicle.”

According to Martin, Dawson Street has become “extremely busy” in the last couple of years due to a second lane being added eastbound. As well, there is a lot of construction traffic from the Gilmore Place megaproject, which has their flaggers stopping traffic.

“Flaggers get mad at drivers, drivers get mad at each other and the flaggers -sometimes it sounds like rush-hour traffic in New York City, coupled with the construction noise. While I acknowledge my error in not seeing him before I changed lanes (and will do better), I am frightened by how quickly this incident escalated. I've been cut off while driving around here dozens of times, but never have had my blood boil to the point where I wanted to physically harm the offending driver or their vehicle. I know everyone is stressed out by COVID-19 and other stuff, but we all need to slow down and breathe every once in a while. There is no way this should have escalated to the point where physical violence even enters the equation.”

The driver was not caught, Martin said.

Opinion: Burnaby cashier ‘visibly upset’ as anti-masker unloads on her
Feb 15, 2021 9:12 AM
Comments