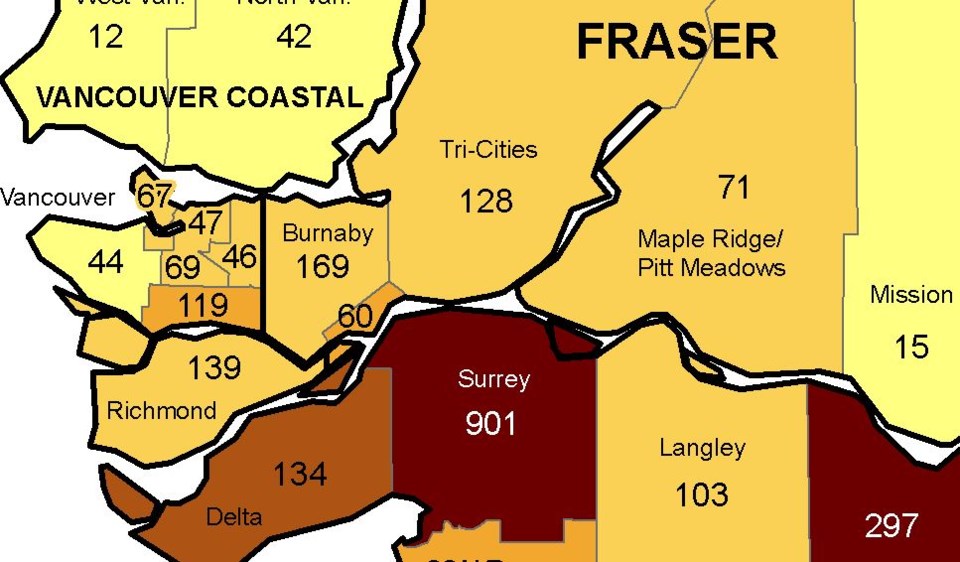 This graphic shows the cases from Dec. 27-Jan. 2.BCCDC graphic

New COVID-19 cases in Burnaby continued to fall at the end of December and beginning of January, but health officials are unsure if this could be partly attributed to fewer tests being conducted over the holidays.

The latest data from the BC Centre for Disease Control says that from Dec. 27 to Jan. 2, Burnaby had 169 new COVID-19 cases.

From Nov. 29-Dec. 5, Burnaby had 238 cases, which is the exact same number Burnaby had for the entire month of September, according to the BCCDC.

While cases dropped as December went on, the month was also Burnaby’s worst with 1,139 new cases, compared with the 1,081 new cases during November.

Burnaby had just 287 new cases in all of October and 238 cases in September.

Provincial health officer Dr. Bonnie Henry has noted that it is crucial for people to remain vigilant in following health orders, since part of the reason for the drop in numbers has been a similar decline in people seeking COVID tests prior to the holidays - perhaps in an attempt to avoid having to change plans around Christmas and New Year’s Eve.

B.C. on January 6 reported that it has a record 381 people in hospitals with COVID-19 infections, with 78 of those people sick enough to be in intensive care units. The province also recorded its highest number of new COVID-19 infections in a 24-hour period so far this year, as 625 people are newly battling the virus.

While this is sobering news that the virus remains prevalent in the province, there is a silver lining with signs of success in combatting the pandemic. The 6,343 people actively fighting infections in B.C. is the lowest number since November 16, when 6,279 people had yet to see an end to their illness. There were also 5,456 people who were immunized in the past day – a daily record. In total, 33,665 British Columbians have been vaccinated since the first vaccinations started on December 16.

There were eight new fatalities in the past 24 hours, for a total of 962 people who have died from the virus since the first such death on March 9.

More than 84.5% (46,728) of the 55,254 people who have been infected with the virus in B.C. have so far recovered, while 8,719 people are under active monitoring by health officials because they have had known contact with someone who has tested positive for the disease.