It wasn’t a good-news budget but it wasn’t as bad as it could have been either. That was the Burnaby Teachers’ Association’s word on the school district’s $253 million 2014-15 operating budget, passed by the board of education Tuesday.
Apr 23, 2014 5:33 PM By: Cornelia Naylor 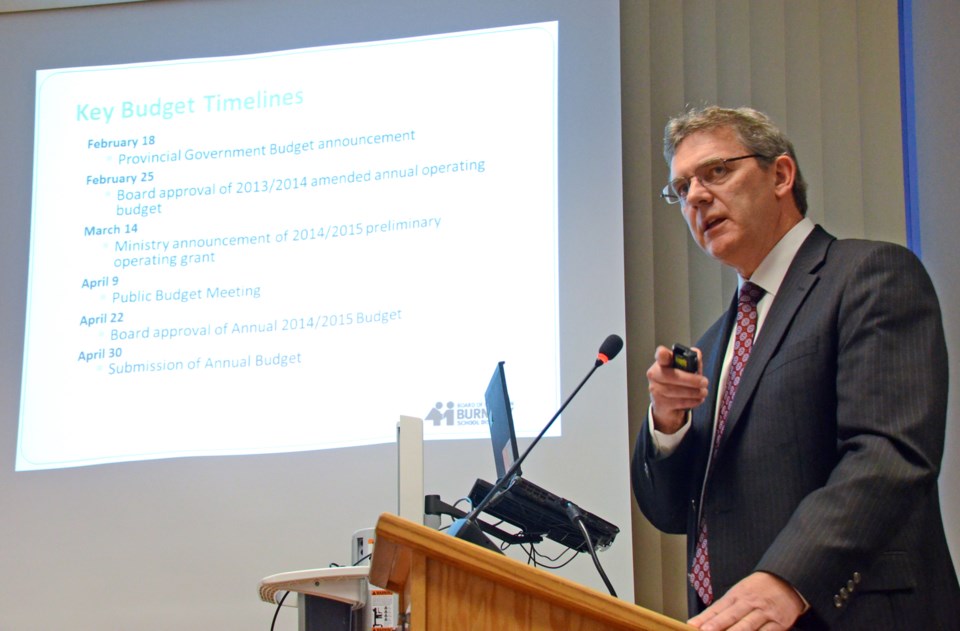 It wasn’t a good-news budget but it wasn’t as bad as it could have been either.

That was the Burnaby Teachers’ Association’s word on the school district’s $253 million 2014-15 operating budget, passed by the board of education Tuesday.

Earlier this month, the district anticipated a $3.1 million shortfall next year and considered cutting almost 42 full-time equivalents (FTE) of staff.

The budget approved Tuesday, however, contained reductions of only about 27 positions.

“It’s not as bad as it was projected to be,” BTA president James Sanyshyn told the NOW. “Obviously they looked far and wide and tried to reduce as much as possible the impacts on students in the classroom, but it’s not a celebratory budget. We’ve just lost 27 positions, and if you look at the proposed cuts over the next two years, it’s going to end up being 100.”

The biggest savings (just over $1 million) will come from increased high school class sizes from an average of 26.5 students per class to 26.75 students, which will eliminate the equivalent of almost 11 full-time teaching positions. Originally the district had proposed upping class sizes even more to eliminate the equivalent of 16 full-time positions.

Elementary non-enrolling teachers — which include music teachers, teacher-librarians and resource teachers — got a similar reprieve.

On Tuesday, however, the district announced it would only cut just over two elementary non-enrolling positions to save $188,600.

It also promised the elementary music program would not be affected—despite teacher-librarians now being slated to cover a small part of classroom teachers’ prep time.

“The majority of preparation time will continue to be provided by music teachers,” superintendent Kevin Kaardal said. “Music programs in each of the district’s elementary schools, kindergarten to Grade 7, will continue. … It is also anticipated that this adjustment will not result in any layoffs or decrease in the number of active elementary music teachers in Burnaby.”

The same could not be said for school custodians who will see the equivalent of more than eight full-time positions cut to save half a million dollars.

Many custodians will also be displaced, as daytime custodians at 12 schools are cut to make way for more efficient evening cleaning.

He argued daytime custodians are more than just cleaners, providing aid in times of emergencies and an approachable adult for kids who aren't comfortable talking to other staff.

In the end, the district decided to keep daytime custodians in all but 12 of its schools.

The changes and cuts will be tough on his members, but Simpson said he sees why they are necessary given what he called the “chronic under funding of public education” in B.C.

“Am I satisfied? I don’t think I’d say I’m satisfied. I’d say I understand,” he said.

All told, the reductions included in next year’s budget will result in very few actual layoffs, according to secretary-treasurer Greg Frank, because they involve cutting “bits and pieces” of positions spread across the district.

But people will be affected, he said.

“At the end of the day there’s that much less work there,” he said. “It affects something somewhere.”

Before approving the cuts, trustees placed the blame for them squarely on the provincial government.

“We are told there is more money in education than ever before, somehow this is difficult to believe,” board chair Baljinder Narang said. “Through sound fiscal management, building partnerships and innovative programming, we have managed to garner surpluses and keep our budget shortfall to a minimum. After years of chronic under funding by the provincial government, however, we can no longer hold off the deeper cuts.”