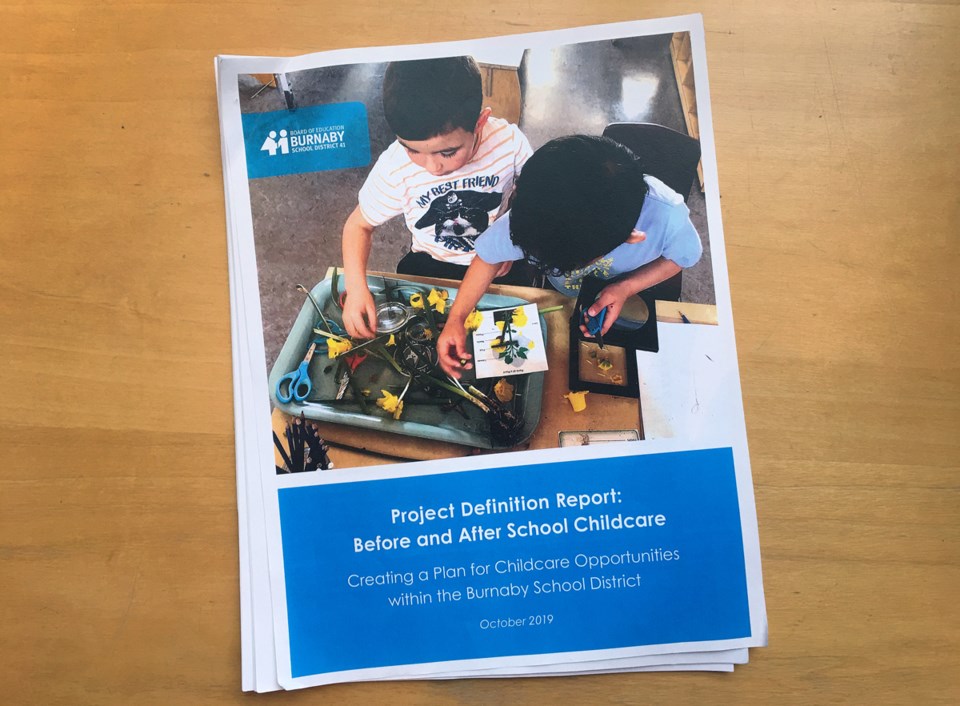 After nine months of studying how to create more childcare at local schools, the Burnaby school district has come up with a $35.7-million plan to add 773 new spaces – all it needs now is the cash from the city and province.

The school board directed staff in December to look into how more childcare could be put in place at local schools.

After months of study and community consultation, the district unveiled a detailed, three-phased plan at a public board meeting Tuesday.

The district doesn’t have the capacity to have a childcare centre at every school, according to the report, so it recommends a “hub” approach.

Childcare centres will be placed at key schools. Those schools will then be grouped with two or three others.

All the students in that hub will then get placement priority in that childcare centre, with busing made available if the distance to the centre is too far to walk.

“The report strives for an equitable approach in which all 41 elementary schools would have either access to a centre on their property or a hub,” chair Gary Wong said.

The district’s first move, according to the plan, is going to be to get childcare space rolled into various capital and seismic mitigation projects, including the University Highlands addition, the Burnaby North Secondary replacement and upcoming seismic upgrades at Stride Avenue Community and Cameron Elementary schools.

Phase 1 will start in January, when the district will add 48 new child-care spaces at Second Street Community and Stride Avenue Community schools by allowing spaces currently being used for StrongStart programs during the school day to double as childcare spaces before and after school.

A Montecito parent at Tuesday’s meeting asked if access to the 91 spaces at the new childcare centre recommended at Westridge Elementary would be divided equally between all the schools in that hub, including Montecito and Lochdale.

Secretary-treasurer Russell Horswill said those and other details still need to be worked out since the district intends to respect existing waitlists.

“A parent may have been on the waitlist for four or five years, and we don’t want to go to them and say, as a result of this report, you’re now no longer on the list because they might be close,” he said.

Most of the money will be spent on new portables that have already been designed.

“We know there’s a lack of inclusive, supported childcare spaces in the province, and the fact that all of these portables are accessible and wheelchair accessible at least shows that we are saying that we are building spaces that are going to be inclusive for all students and we know how hard it is to get those supported childcare supports,” she said.

Child care is outside of the district’s mandate, so the plan recommends getting all funding from the city and province, with the city picking up the tab for the infant-toddler centres ($7,879,744) and the province paying for the before- and after-school care facilities ($22,895,288).

Horswill said the district has been in contact with both the city and province throughout the planning process, so the requests won’t be coming out of left field.

And recent funding announcements from the province, like the $192.5 million Childcare BC New Spaces Fund, have signalled the NDP government is willing to spend money on child care.

“I saw her come in with a bag, so I was hoping it was full of money,” quipped Horswill.

Chen told the NOW the school district’s funding request does have some important points in its favour.

“We do have a priority for not-for-profit public spaces,” she said. “Our funding for public space is way more than for the private ones, and, especially, public ownership is crucial because they tend to be the services that will stay there the longest. They become a community asset.”

To find out more about the district's child care plan, click here.