A Coast Salish carving created to welcome students, staff and visitors to Burnaby’s Alpha Secondary School was officially dedicated this week.
Nov 21, 2019 10:37 AM By: Cornelia Naylor 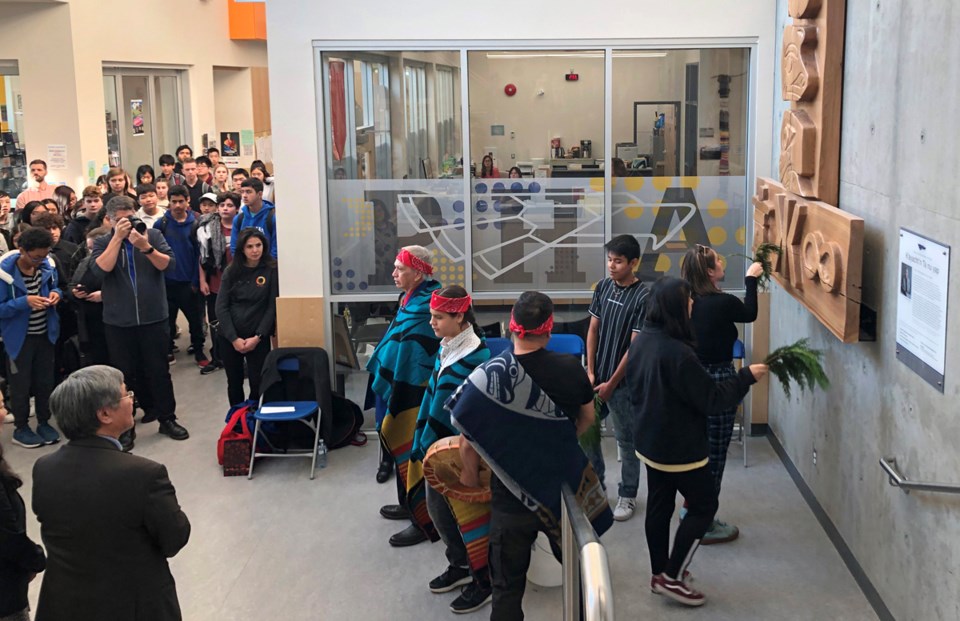 Installed in the school’s new wide-open main entrance, the carved panel is one of a number of “small acts of reconciliation” the school has undertaken in recent years, according to principal Tim Wozney.

“We called them small acts because, no matter how large they are, it doesn’t compare and it certainly doesn’t repair the damage that was done through the residential schools and things like that,” he told the NOW.

The school began planning the project during its $27.2-million seismic upgrade and addition, completed in September 2018, Wozney said.

“We saw it as an opportunity to do something.”

Undertaken by Squamish elder and artist Latash Nahanee with help from assistant Chris Fyfe, the project began in earnest in September 2018 with the delivery of a 2,000-pound cedar log donated by the Squamish First Nation.

For about nine months, Nahanee, Fyfe and hundreds of students – including elementary kids from all of Alpha’s feeder schools – helped chip, chisel and sand the log.

Ben Hourie, an Alpha student whose family is from the West Bank First Nation in the Okanagan, said the project helped make Grade 8 one of his happiest years in school so far.

He had a spare block last year and most often spent it with Nahanee or Fyfe working the cedar.

“It was nice to feel connected at school,” he said.

The final product is a welcome panel comprised of seven carved figures, a thunderbird, an owl, a black bear, a frog, an Inukshuk, the Métis infinity symbol and a butterfly pattern.

As a whole, the work was designed to symbolize welcoming and inclusion and acknowledge the fact the school sits on traditional Coast Salish land.

The butterfly, however, was a bit of a personal touch by Nahanee.

His mother, a cedar root basket weaver, often used the pattern, he said.

Along with a tribute to that tradition, he included the pattern as an appropriate symbol for the high school journey.

“The Grade 8 student arriving here will be a much different person when they graduate,” he said. “They’ll go through a lot of transformation and will find their own personal gifts.”

Wozney called the finished carving “amazing” but said the completed work wasn’t the most significant part of the project.

“Watching the elementary kids come through, watching Latash tell stories, watching just the process was really more important to me,” he said.

The welcoming panel was dedicated Tuesday with a blessing ceremony led by Chief Ian Campbell of the Squamish Nation.

“It was illegal until about 1951 to do these types of ceremonies,” he said. “I truly commend Alpha and the school district for taking reconciliaction.”