A pair of Burnaby school district “science rock stars” may have been a bit intimidated going head to head with some of the smartest young scientists in the world this month, but that didn’t stop them from winning silver at an international science fa
Feb 20, 2020 2:33 PM By: Cornelia Naylor 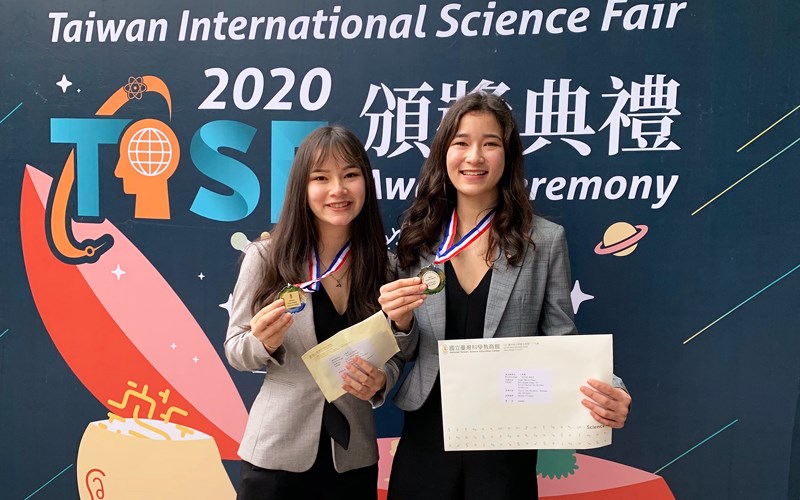 Burnaby North Grade 11 students Claire and Vanessa Scrimini show off the silver medals they won in the microbiology category at the 2020 Taiwan International Science Fair in Taipei earlier this month.Contributed

A pair of Burnaby school district “science rock stars” may have been a bit intimidated going head to head with some of the smartest young scientists in the world this month, but that didn’t stop them from winning silver at an international science fair.

The Scriminis’ project, “Algae Meets Fungi,” was no baking soda volcano and had already won gold at the national fair in Canada last May, but the twins knew the competition at the international fair would be stiff.

“It was quite intimidating knowing that we were competing against the smartest young scientists from all over the world,” Vanessa said. “Every person in the room found a method of solving a unique issue. It was absolutely amazing to gain perspective regarding what other innovators are doing globally and it gives me hope for our future.”

Algae Meets Fungi was designed to test which combination of fungi and algae would be most effective for making biofuel.

At one point, the twins converted two spare bedrooms at home into makeshift labs to grow fungi and algae and later finished their testing at a lab at SFU.

Like all the entries, the Scriminis’ project was evaluated by industry professionals, professors and researchers.

In the end, the Scriminis won silver in the microbiology category.

But science fairs – including the international competition – are about more than winning medals, according to Claire.

“We had the amazing opportunity to meet many like-minded individuals and share our work with students from all over the world,” she said.

And Donna Morgan, who oversees the science education in the Burnaby school district, said Claire and Vanessa’s accomplishments go beyond medals and awards: