A team of Burnaby students who designed, built and programmed an industrial-sized robot from scratch in six weeks is in Victoria this week to put it through its paces at a Mars-mission-themed competition.
Mar 7, 2019 2:35 PM By: Cornelia Naylor 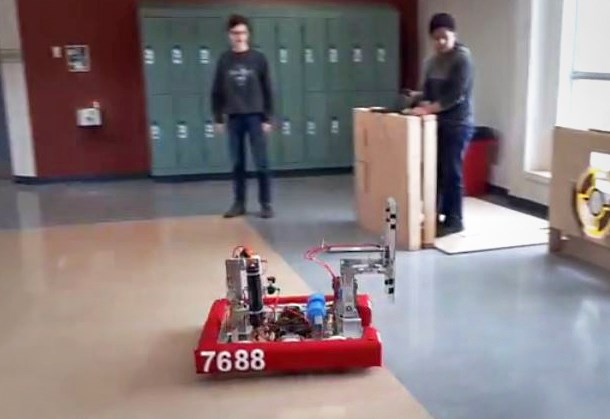 Members of the Creekside Voyagers, a team of Byrne Creek Community School students who have designed, built and programmed an industrial-sized robot for a competition in Victoria this week, take their entry for a spin at the school.

A team of Burnaby students who designed, built and programmed an industrial-sized robot from scratch in six weeks is in Victoria this week to put it through its paces at a Mars-mission-themed competition.

The FIRST Robotics (For Inspiration and Recognition of Science and Technology Robotics) competition challenges large teams of students to build and program robots of up to 125 pounds to compete against others in games of skill.

Byrne Creek Community School got onboard for the first time this year, dubbing its team the Creekside Voyagers.

“It’s not just the robot. It’s also funding for the robot, publicity, stuff like that,” said Grade 10 student Justin Viacrusis, who programmed the school’s entry, which weighs between 60 and 80 pounds. “It’s meant to simulate the real world.”

Students have only six weeks to design, build and program the robots, but teams can be as big as they want and there is no limit to the number of teachers and community volunteers who can help.

One of the teachers involved has described the competition as the "Olympics of smart."

Because this is the school’s rookie year, a core group of only about 10 students has done most of the work, but tech education teacher Steve Cook expects more to get involved next year, now that there’s a robot to pique their interest.

“We’ve been driving the robot around in the school,” he said. “So, for next year, it seems like we have a ton of interest.”

Cook is one of three teachers involved. He and fellow tech ed teacher Duncan McDonald have focused on helping the kids on the manufacturing side. Science teacher Ash Vince has helped Viacrusis with the programming.

They’ve also brought in experts from the community, like a Red Seal metal fabricator to teach aluminum TIG welding, a retired software engineer and a third-year BCIT civil engineering student who helped in the design phase, showing students how to prototype their project.

Byrne Creek’s robot started as just a bunch of parts screwed onto a plywood sheet that Viacrusis programmed separately at first and then together.

“The manufacturing and electronics/programming teams were interacting quite a bit during that phase because they would design something like the arm and then they would come to us to see if it was possible to program,” Viacrusis said.

He said the group learned quickly that no individual would be able to go it alone.

“Being on a team, it’s really showed me that you can work as a team to accomplish much greater things more easily,” he said.

More important even than metal work or computer skills, Cook said the competition teaches kids what it takes to design a successful project.

“I think the best thing it teaches is how to prototype something and build something from scratch – the cycle of repeated failure and then using that failure to make something better,” he said.

For Viacrusis, the best part has been working through one small programming problem after another to bring the robot to life.

“It’s kind of like a parent and a child,” he said with a laugh.

For six weeks, he said team members met every day after school to work on the project, and many took work home after that.

The end result is a remote-controlled, six-wheeled robot with “substantial torque,” thanks to four big motors like those found on electric wheelchairs.

“I knew going into it it would be a ton of work, but I didn’t know the payoff would be this good,” Cook said of the process.

At the competition in Victoria this week 50 robots will be put through their paces, tackling tasks meant to simulate a Mars mission, during which a space ship needs to be repaired and refuelled during a sandstorm.

The sandstorm component requires the robot to be operated out of view of the driver.

The Byrne Creek team got around that problem by equipping their entry with wifi cameras that beam images to a computer.

Despite being a rookie team, Viacrusis hopes Byrne Creek’s entry ends up on top.

Looking forward to next year, Cook said the school will be looking to build on this year’s success with three things: money, materials and mentorship.

To find out more about the Creekside Voyagers, visit creeksidevoyagers.wordpress.com.