On March 11th, students from SFU Fair Trade virtually visited the third and fourth grade class at University Highlands Elementary School on Burnaby Mountain to speak about the intersection of fair trade and climate change.
Mar 27, 2021 5:13 AM By: Petra Chase and Nell Jedrzejczyk 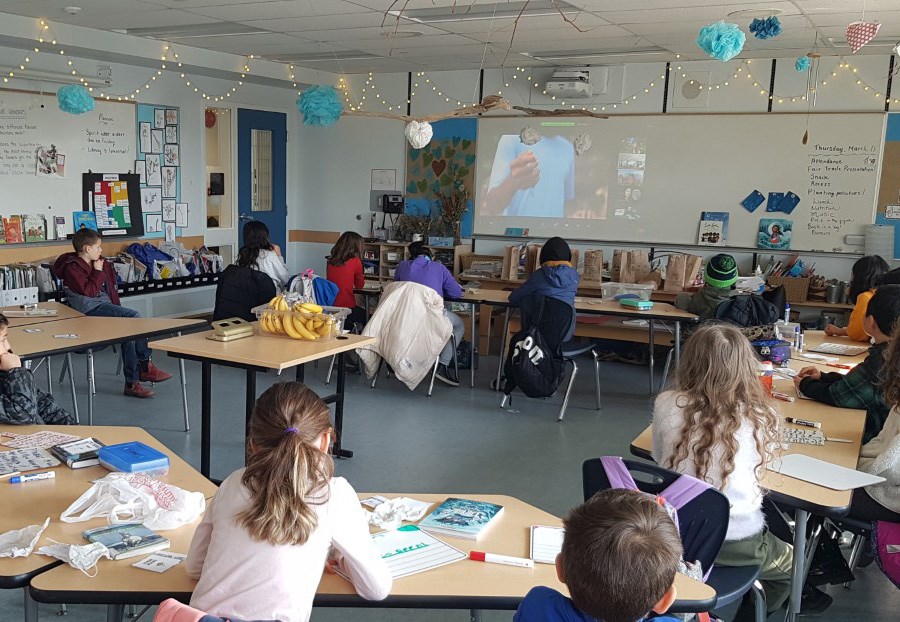 On March 11th, students from SFU Fair Trade virtually visited the third and fourth grade class at University Highlands Elementary School on Burnaby Mountain to speak about the intersection of fair trade and climate change.Contributed

On March 11th, students from SFU Fair Trade virtually visited the third and fourth grade class at University Highlands Elementary School on Burnaby Mountain to speak about the intersection of fair trade and climate change.

Presenting through Zoom, four SFU Fair Trade Ambassadors facilitated in-class discussions to help the elementary students think about implications of the climate crisis as it relates to producers in the global south. This included explaining various problems affecting farmers and their livelihoods, and leading an activity where the students presented ideas to solve various climate challenges for cocoa producers. The ambassadors also spoke about how fair trade helps farmers build climate resilience.

“I’m surprised how they know a lot about climate change and fair trade,” Fair Trade Ambassador Daphne Chan said in an interview. “They think about the real situation and possible solutions. They also really care about the farmers and think that it is not fair for farmers to have so little money for their hard work.”

Chan explained one of their goals was also to inspire the children to appreciate what they have, rather than take it for granted. “Fair trade is not just about giving farmers a better future, but disclosing the devastating impact that climate change has globally,” Chan said. “We have to take actions to protect our resources before it is too late.”

This was SFU’s second visit this school year to teacher Kristina Carley’s third and fourth grade class. “Discussions around [social justice, environmental justice, and equity] are so important,” Carley said. “There are such limitations right now, and having conversations early is the way to make changes. These are systemic changes and they are so necessary.”

Carley said the class has been “thinking about ethical decision-making and working towards creating better conditions.” She added, “I think that that is really beautifully infused in the curriculum now.”

The SFU Fair Trade Ambassador Program is a student-led group advocating for fair trade in the community. The pandemic has required them to rethink their engagement strategies from in-person to online. According to Carley,“the thought and the care that [the Ambassadors] put into thinking about what learning [over Zoom] could look like and how we could make it feel like we’re together was really accomplished. [. . . .] It felt personal.”

SFU student Chahat Mehta joined the Fair Trade Ambassador Program because she would like to help Indian farmers in her home country, but feels she can’t do much from abroad. “Fair trade gives me a chance to help farmers, to educate people about their basic needs and basic rights,” she said. “I think it’s really important for children to know about the unequal distribution of wealth.”