Burnaby tap dancer to perform inside a mine

Modern tap dancing is no longer just about bow ties and jazz hands on Broadway. Just ask Burnaby-based dancer Danny Nielsen.
May 13, 2013 1:00 AM By: Marelle Reid 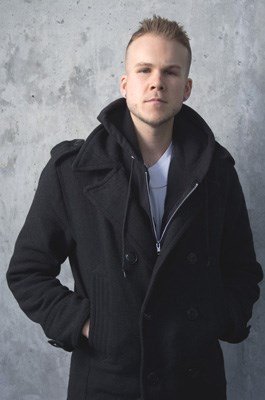 Modern tap dancing is no longer just about bow ties and jazz hands on Broadway.

Just ask Burnaby-based dancer Danny Nielsen. Wearing a ball cap, tank top and gold necklace, he looks more hip hop than tap, but when he gets moving, it's easy to see how his chosen art form has evolved to encompass a wide variety of fashion and musical styles.

"The thing is, people think when you say tap dance that it's all this lah-de-dah thing, and I'm like, no, it's modern, it's happening, it's with the times," he says, taking a break from rehearsing in the studio at the Vancouver Tap Dance Society.

Whether he's improvising to Radiohead singles, busking on the street in jeans and a t-shirt, or dressed to the nines on stage with a live band, Nielsen works his own personal style of sound and movement into his work.

"It's really freeing," he says. "When I dance, there's a lot of emotion going into it. I kind of try to dance how I feel. The more technical you try to get, the more disconnected you kind of feel from what you're actually doing. I kind of try to say what I'm feeling on that particular day, so it's kind of like therapy, to be honest with you. It's a release. It's getting it out. It feels good."

Originally from Calgary, Nielsen discovered tap dance by accident when he was eight years old. His older sister was taking a class and he had to wait for her at the studio. One day he decided that, rather than be bored, he'd jump in and try a few shuffle-ball-steps, and he hasn't stopped tapping since.

In his teens, Nielsen saw footage of legendary tap dancers Gregory Hines, the Nicholas Brothers and Savion Glover, and left studio training to pursue their "hoofing" style - focusing more on the footwork and rhythm created by the beats than the arm movement found in "show tap."

Today the 25-year-old is an award-winning freelance artist who last year won the Dance Centre's Santa Aloi Award, which offered a $4,500 prize to help develop a full-length tap piece. His performances have included the famous tap sequence at the 2010 Olympic opening ceremony in Vancouver, as well as shows in Germany, Switzerland, Brazil and the U.S.

His most unusual performance, though, will be later this month, in a mine.

Co-produced by Astrolabe Musik Theatre and the Britannia Mine Museum, the NEWmatica live show will bring together musicians and tap dancers to show off the percussion created by the steel beams and girders, round wooden platforms, concrete floors, and found objects inside the Britannia Mine's 26-storey mill.

Many people might not think of a tap dancer as primarily a percussionist, but Nielsen says the sound he makes is more important than the imagery he creates through his movements.

"It's really music at the end of the day," he says. "We are essentially musicians, so we need to have a wood floor. We need to have proper amplification to be heard. ...that's part of our expression. We could dance and they could go, 'wow, his feet are moving really fast,' but they can't understand what we're saying unless we're properly heard."

Performing with Nielsen will be tap dancer Dayna Szyndrowski, musicians Fringe Percussion and soprano Heather Pawsey, and members of the public who participated in a series of workshops with Astrolabe Musik Theatre.

The show will be held Saturday, May 25 at 7:30 p.m. at the Britannia Mine Museum at 1 Forbes Way, Britannia, on the Sea-To-Sky Highway. Tickets are $25 for adults, $18 for seniors and students. For tickets or more information, visit www.astrolabemusiktheatre.com.