In the world of global trade, big names like China and the U.S. are usually the first to come to mind as partners with Canada.
Oct 27, 2015 4:08 PM By: Jeremy Deutsch 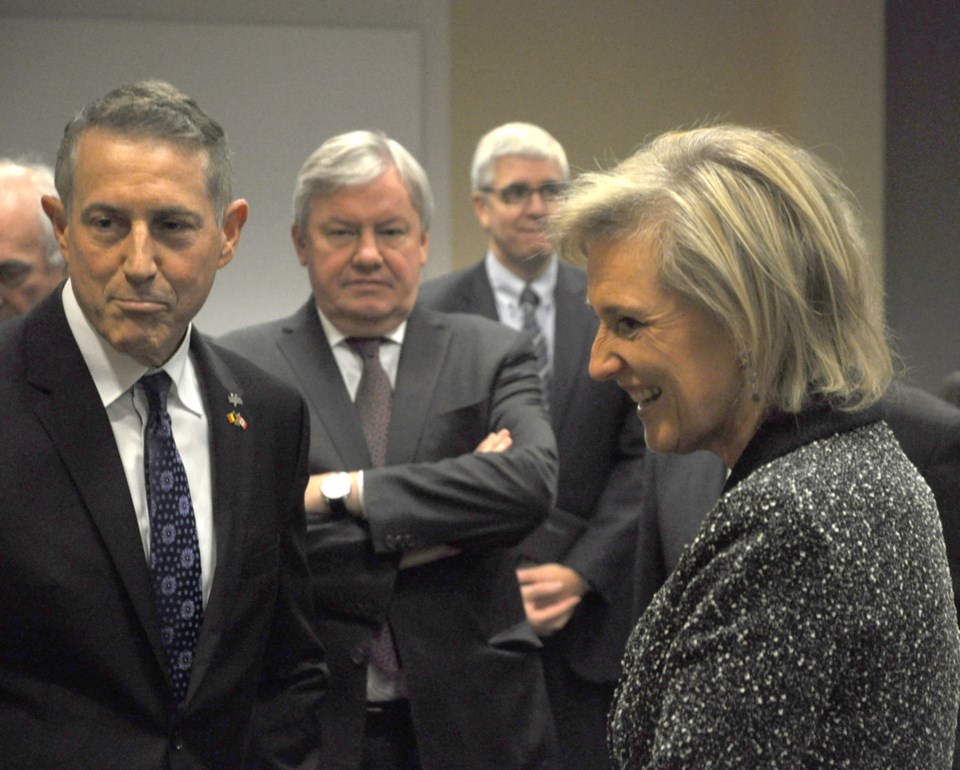 Princess Astrid of Belgium is welcomed by Alpha Technologies president and CEO Mark Schnarr during a visit to the Burnaby-based company Tuesday morning.Jeremy Deutsch

In the world of global trade, big names like China and the U.S. are usually the first to come to mind as partners with Canada.

But a European country best known on this side of the pond for its chocolate is hoping to change minds and get in on the trade action with Canada.

This week, a trade delegation from Belgium was in the Lower Mainland looking to drum up some business, and on Tuesday, the group from the country nestled between France and Germany was in Burnaby to check out some local companies.

One of the stops was Alpha Technologies, a Burnaby-based technology company specializing in power solutions that has close ties to Belgium.

The company hosted a contingent from the Belgium trade mission to take a tour of company’s large facility on Riverfront Gate.

The tour also included a brief visit from royalty, Princess Astrid of Belgium.

David Boroevich, the company’s chief marketing officer, explained Alpha has been working closely with the Belgian community for years, noting the company’s a partnership with Belgium-based CE+T Power.

He said the visit was an opportunity to welcome the princess and the delegation in hopes at some point of opening the door even wider for business.

“Sometimes relationships you build through discussions like this lead to something years down the road,” Boroevich said, calling it a “huge honour” to host the princess.

He also said the company sees Belgium’s central location as a gateway into Europe, the Middle East and beyond.

While Princess Astrid did not grant interviews to the media during a 25-minute stop at Alpha, the minister of economy and foreign trade for the Wallonia region of Belgium Jean-Claude Marcourt did speak to the NOW about the trade mission.

He pointed out the long relationship between the two countries, but noted trade is much greater in Quebec and Ontario than in B.C. and Alberta.

“This mission’s [goal] is to develop and improve the relationship between our [Belgium] companies and [Canada’s companies] for trade and investment,” Marcourt said.

Specifically, he said his country is interested in new technologies and raw materials and sees B.C. as a window to the markets in Asia.

Marcourt also suggested it was important for the princess to take part in the 300-person strong delegation to support the Belgian companies taking part.

Also at Alpha was a contingent of local Burnaby politicians, including Coun. Pietro Calendino, who had a brief chat with Princess Astrid about their Italian backgrounds.

He called the princess’s appearance “exciting” while adding the visit by the Belgian delegation shows the importance and the calibre of businesses in Burnaby.

“We’re very proud of the business climate we’ve created in Burnaby,” Calendino said, adding companies like Alpha are examples of global companies that operate in the city.

The Belgian delegation was expected to move on to Calgary later this week.