Burnaby will have 'best looked after tenants that Canada has ever seen': Hurley 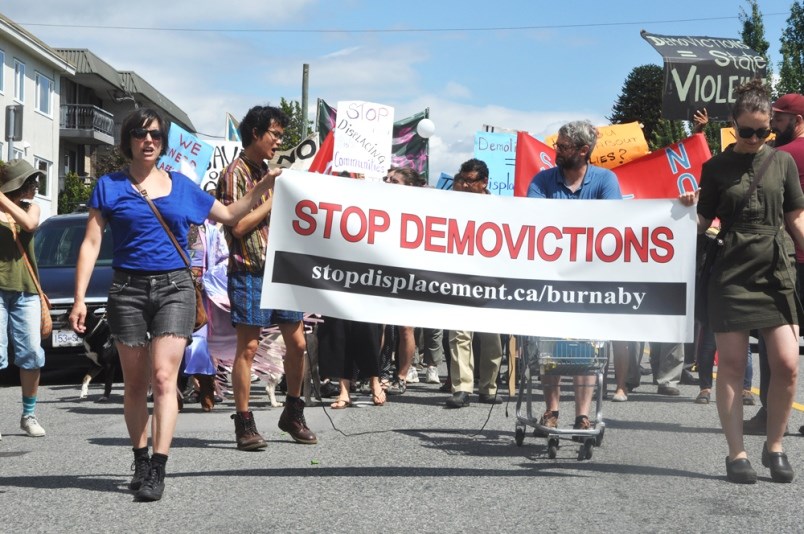 Two activist groups that spent years protesting Metrotown demovictions will be returning to Burnaby City Hall to denounce proposed developments they say could displace vulnerable renters despite the promises of local politicians.

Both ACORN and Stop Demovictions Burnaby (SDB) are opposing four rezoning applications in the Metrotown neighbourhood coming to a public hearing on Tuesday evening.

The proposals were held up by a rezoning moratorium in place since while a housing task force formed a plan to make housing more affordable and displacement less disruptive for tenants.

The proposed plans all conform to the city’s new policies, including replacing demolished rental apartments on a minimum one-to-one basis.

The city says the developers have agreed to follow forthcoming tenant relocation policies that would require them to house displaced renters during construction and to give them first dibs to move into replacement apartments at the same rents as before.

But the activists are leery. The new tenant assistance plan is not yet ironclad policy – and with “no legal obligation” for developers to house displaced people during construction, “tenants will be pushed into a new cycle of displacement,” SDB said in a press release.

The group also denounced Burnaby’s definition of “affordable” rents in new builds as 20% below the market rates determined by the Canada Mortgage Housing Corporation, saying it would allow developers to “use the most profitable definition for their sinister project.” SDB said the city should instead pin rents at 30% of a tenant's income.

Developers are not following the proposed policy that would require them to subsidize the rents of displaced tenants in temporary rentals, according to ACORN’s Murray Martin. Instead, they are using “increasingly aggressive buyouts” to empty out existing buildings before they’re submitted for rezoning, Martin said in a press release.

“They (developers) are speculating that their rezoning approval will be passed without fulfilling rent stabilization obligations and fewer people push back at public hearings when buildings are empty,” he said.

The promised renter protections will be codified as soon as possible, with the new policy hopefully coming to council at its next meeting on Dec. 2, Hurley told the NOW on Monday.

He said he understands why renters may have a hard time trusting a city government that has previously allowed so many people to be displaced.

“I fully understand their suspicions and their fear that these tenants aren't going to be looked after but I'm very confident these are going to be the best looked after tenants that Canada has ever seen,” he said. “I think we really have moved heaven and earth to make this thing work.”