Burnaby's biggest Christmas lights show is now on the water

In a season bereft of shopping mall Santas and large festive gatherings – including the recent cancellation of Burnaby Heritage Christmas lights display - a flotilla of mariners from Reed Point Marina is hoping their lights will burn extra brightly t
Nov 25, 2020 9:06 AM By: Mario Bartel 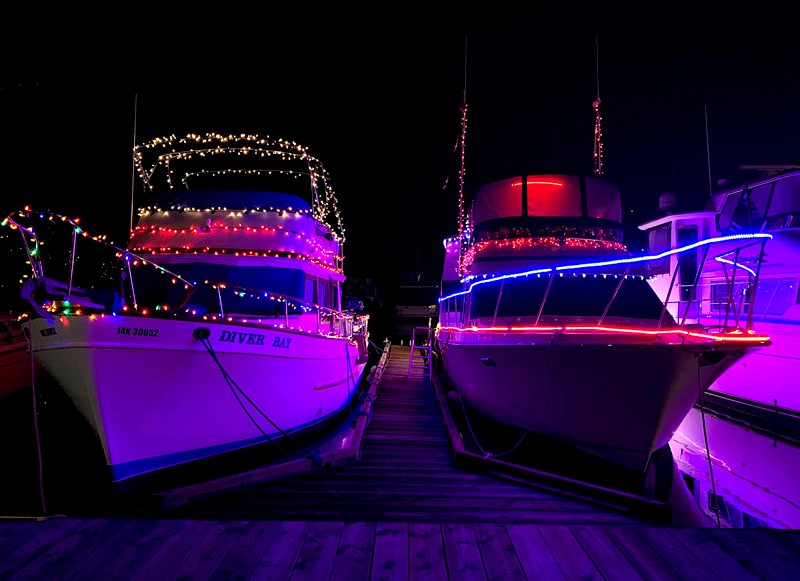 Some of the boats participating in this year's Christmas Santa Cruises in Burrard Inlet are already decorated.MIKE GIRARD PHOTO

In a season bereft of shopping mall Santas and large festive gatherings – including the recent cancellation of Burnaby Heritage Christmas lights display - a flotilla of mariners from Reed Point Marina is hoping their lights will burn extra brightly this Christmas.

Mike Girard, the newly-christened skipper of the annual Santa's Christmas Ships, said this year’s floating parade of decorated pleasure craft up and down Burrard Inlet on the Burnaby shore is taking on special significance as more and more seasonal celebrations are cancelled or curtailed by public health orders and concerns over transmission of COVID-19. After all, boaters are readily social distanced, as long as passengers and crew are confined to immediate family.

“We’re seeing this as an opportunity to put on something more,” Girard said. “It’s just something special we can do.”

Weather permitting, this year’s cruises will sail every Friday and Saturday evening, 7 to 9 p.m., beginning Dec. 4 through to Dec. 19.

Girard said while the flotilla can vary in size from 10 to as many as 40 boats in an evening depending on who’s available to sail as well as the weather, more boaters have expressed an interest in being involved this year. Several have already decorated their boats in anticipation.

Girard added a desire to celebrate normally a Christmas that is shaping up to be anything but typical because of the pandemic seems to be driving a lot of people to hoist their trees and decorations early.

While community celebrations that greet the flotilla in some locations, like Rocky Point Park in Port Moody and Gates Park in North Vancouver, won’t be happening this year, the boaters do have some special surprises in store, such as extra-close sail-pasts if waterfront residents leave on their porch lights or if viewers on the public shorelines signal with their cellphones or other illumination.

“If we can get a bit of interaction from the shore side, we’ll go the extra nautical mile,” Girard said, adding fireworks will be part of the sail pasts at Belcarra Bay on Dec. 12 and Brighton Beach in North Vancouver on Dec. 19.

Girard, who’s piloted three different craft in the Christmas cruises since 1994, said being on the water with all the other decorated boats on a still winter’s evening can be a magical experience. Some sailors even accompany their lights with seasonal music.

“You’ve got a jet black background and the colourful LED lights just pop,” he said. “The show is phenomenal.”

The schedule for this year’s cruises is: