Burnaby's biggest construction project is keeping some up late

Martin Kendell understands construction is going to happen in his neighbourhood. After all, he lives across the street from the Gilmore SkyTrain station and transit hubs attract new development.
Jul 1, 2020 5:35 AM By: Chris Campbell 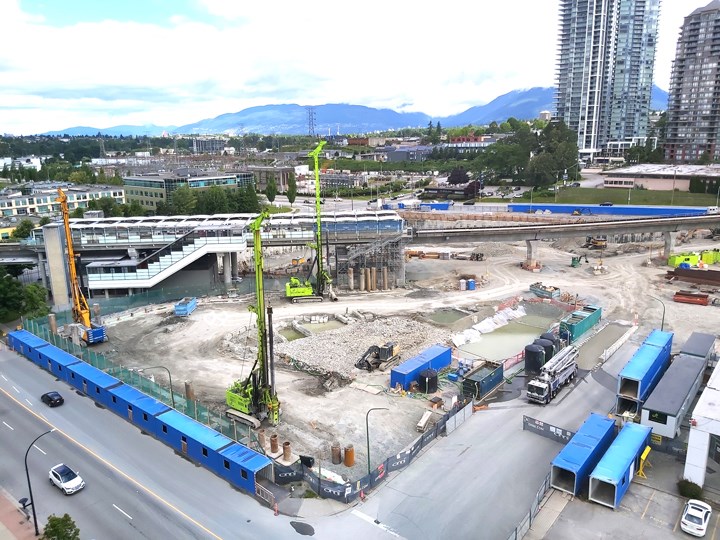 Martin Kendell understands construction is going to happen in his neighbourhood.

After all, he lives across the street from the Gilmore SkyTrain station and transit hubs attract new development. But he’s fed up with the construction noise that he says is happening during “after-hours” periods at the Onni’s Gilmore Place project. The project will see multiple towers built, including what is expected to be the city’s tallest building.

Kendall is one of three residents who have contacted the NOW in the past 10 days, but he is the only one who was willing to go on the record.

“We've been dealing with construction there since the end of 2019,”Kendall said. “Up until recently, the construction noise was somewhat tolerable. However, recently it's gotten really bad. Construction crews start at 7 a.m. sharp and have been drilling foundation pilings and jack hammering on site, which causes a giant ruckus. As well, construction crews been occasionally working late, including one Friday night when they didn't stop until 11:30 p.m. and the RCMP were called by several people to tell crews to wrap it up.”

For some residents, the late noise is OK, but Kendall works an afternoon shift so it’s disruptive.

“As well, they have an automated on-site monitoring alarm which was going off at all hours of the night whenever someone drove up the private drive,” he said. “I'm extremely sleep deprived and at my wits end when it comes to dealing with this.”

Kendall wrote a letter to council as a formal complaint about the issue.

The City of Burnaby told the NOW on Tuesday that the city has received several complaints from residents about the noise.

“With all construction projects in the city, we encourage the developers to be good neighbours,” the city said in a statement. “We also respond to complaints to ensure compliance.”

The city’s Noise or Sound Abatement Bylaw allows construction between 7 a.m. and 8 p.m., Monday to Friday, and 9 a.m. to 8 p.m. on Saturdays, the city said. The bylaw also specifies that in the course of the construction work, “at no time shall continuous noise exceed 85 dBA when measured at least 15.2 meters from the source in a residential, multifamily, public or institutional district.”

“In response to noise complaints from residents near the Gilmore Place project, city visited the site and conducted noise testing but at that time found the readings to be in compliance of the bylaw,” said the city’s statement. “In one case, we were informed of work going on beyond 8 p.m. and staff attended and enforced the bylaw.”

The NOW contacted Onni about the noise issue and the company released a statement in response.

“Gilmore Place is a complicated construction project given the unique nature of building around the Gilmore SkyTrain station and nearby track, so it is important we conduct work in a manner that never impacts the smooth functioning of the system,” Onni said. “With construction ongoing, our construction crews generally finish all their work in the prescribe work hour windows provided by the city. Under certain circumstances, work needs to be completed outside of the hours set by the city so as to not impact the system, and while rare, this work is preplanned, and we obtain approval and a permit from the City of Burnaby.

“On occasion, events occur that require our site teams to continue work outside of the set work hours. When this occurs, we immediately inform the city that this work needs to be completed, and coordinate with the correct city officials. Generally we are able to resolve the issues shortly after the extend timeframe, but if the issues cannot be resolved in a timely manner, we stop work, and resume the following morning. This has occurred twice in the last several months, and even in the event this has been required, the noise levels have been minimal.”