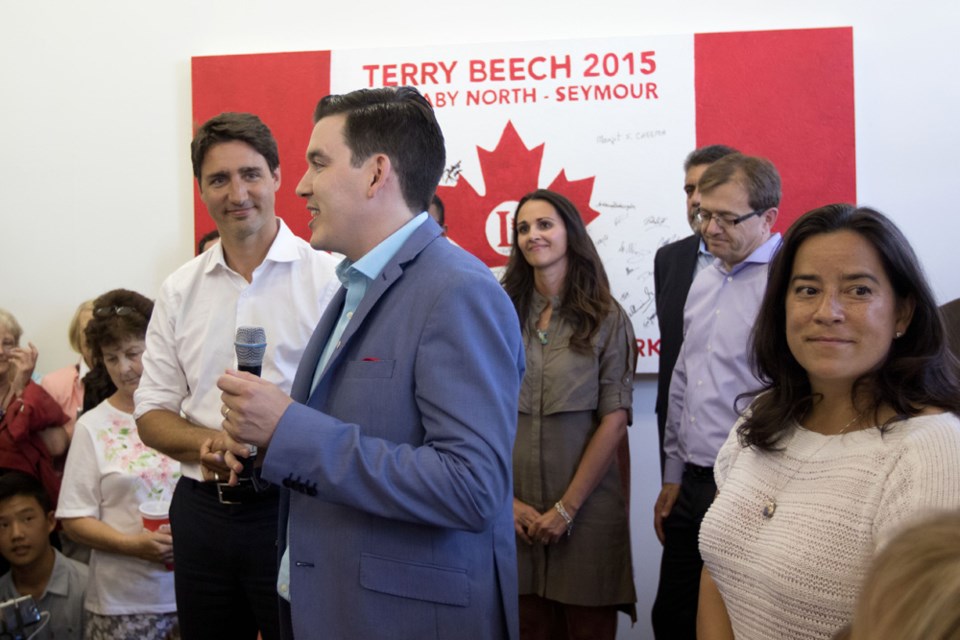 Newsmaker: Terry Beech, seen here with Justin Trudeau at his Burnaby campaign office in the summer, won the Burnaby North-Seymour riding for the Liberals on election night.contributed

The National Energy Board’s review of the Kinder Morgan pipeline expansion will likely go back to the drawing board following the Liberals’ majority win on Monday.

Terry Beech, the newly elected Liberal in Burnaby North-Seymour, told the NOW there will be no decision on the proposed Kinder Morgan pipeline expansion in January.

Beech said the pipeline will be one of the major issues he’ll work on as an MP. He also said he will start by reaching out to Kinder Morgan, local mayors, councillors and MLAs as well as different community groups, including the Tsleil-Waututh Nation, to discuss moving forward on the issue.

The National Energy Board’s original deadline for a final recommendation on the $5.4-billion proposal was Jan. 25, but it was then delayed to May 20, because of a conflict of interest over evidence supplied by an oil industry consultant who was later appointed to the NEB.

Thanks to changes from the previous Conservative government, Cabinet has the power to override the NEB’s recommendations on major oil projects. Whether the newly elected Liberals change that remains to be seen.

Kinder Morgan Canada president Ian Anderson was not granting media interviews after Monday’s election results. Communications staffer Lisa Clement could only offer an emailed statement from Anderson but said there may be more information in the coming weeks.

"Kinder Morgan Canada continues to advance its application for expansion of the Trans Mountain pipeline with the National Energy Board, which is scheduled by the NEB to be completed in May of 2016,” the statement reads. “We look forward to briefing the new federal Liberal government about our project in the days ahead and working constructively with them to build important market access capacity while respecting the environment and First Nations."

National Energy Board, spokesperson Craig Loewen said the Liberal majority doesn’t change anything for the pipeline at the moment because the process the board follows falls under a legislated mandate.

“That doesn’t change unless the legislation changes or we’re ordered to do things differently,” he explained.

“The reality is there were a lot of things said in the campaign. No one’s even been sworn in yet,” he added. “We just have to wait and see.”

New Democrat Kennedy Stewart, now the MP in Burnaby South, said he thinks the pipeline will go ahead under the Liberals’ watch.

“I think in the end, under Prime Minister Trudeau, will in one way or another approve the Kinder Morgan pipeline whether it’s through a direct cabinet decision or a new NEB process,” Stewart said. “I think they will cancel the Northern Gateway pipeline and they’ll approve Kinder Morgan.”

“They’ll make it look like there’s more consultation. They’ll add six months onto the process and they’ll talk to some First Nations, and then they’ll approve it,” he added. “I think Kinder Morgan is back at the drawing board. They’ll talk to their insiders at the Liberal party, … to find the best way to get this project built.”