Burnaby Mayor Mike Hurley spoke with pride at the official opening of Norland Place, the city’s first modular housing project for people who are homeless or at risk of becoming homeless.

“For too long people have been literally left out in the cold,” he said at a press conference on Friday, Oct. 25. “For the community, it is a signal that the City of Burnaby is committed to public safety and ensuring there is a place here for everyone."

But the 52-unit supportive housing project on Norland Avenue near Highway 1 was opening seven months behind schedule and the City of Burnaby’s “onerous” processes played a key part in the delays, according to email exchanges between BC Housing and the city obtained by the NOW via a freedom of information request.

The project was first announced in May 2018, with the province committing $7.6 million as part of its Rapid Response to Homelessness Program. At the time, the estimated completion date was March 2019. Once the site was prepared, BC Housing expected to build the project in a matter of weeks by using prefabricated modular units.

In late February 2019, with the project’s completion nowhere in site, a City of Burnaby staffer emailed BC Housing asking what accounted for the delays and what was being done about it.

Naomi Brunemeyer, BC Housing’s director of development for the Lower Mainland, responded, saying Burnaby’s processes “came in piecemeal” and were “much more onerous (than) other municipalities.”

BC Housing had just sent the last batch of fees and legal documents required by the city, Brunemeyer wrote at the time.

“I see these to be the final impediments. I think the fact that we approved the project and kept our consultants working without knowing the final expectations of the [City of Burnaby] and impact on the costs was how we mitigated further delay.”

She acknowledged issues with removal of invasive knotweed and “extensive engineering requirements on the site” also contributed to delays. 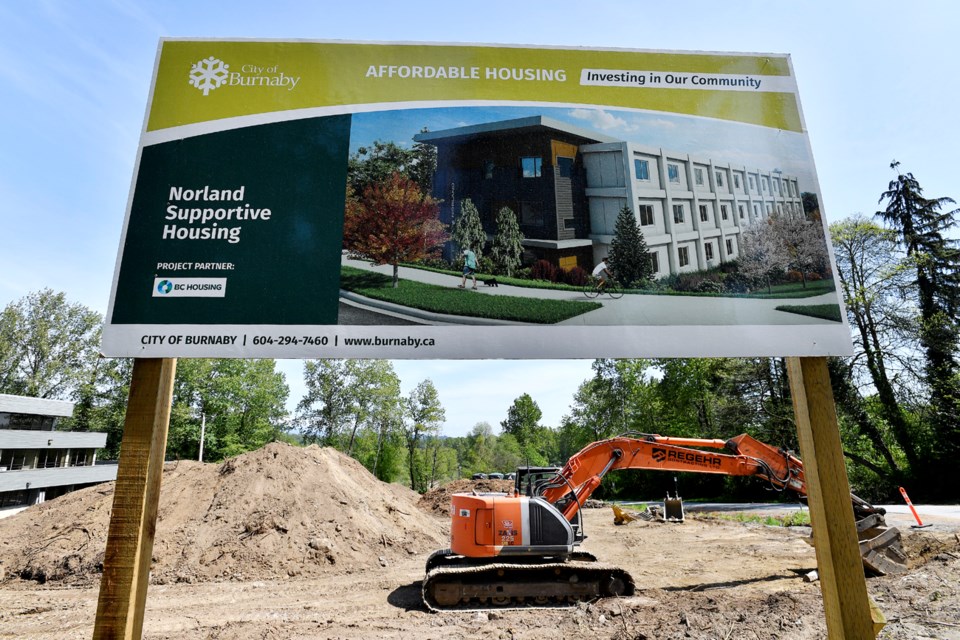 BC Housing left waiting and 'confused'

Further emails between Burnaby and the housing agency show BC Housing staff struggling to comply with the municipality’s bureaucratic requirements both before and after Brunemeyer’s email.

Before the project was made public, BC Housing emailed the city at least twice to say its survey team was “ready to go” but its crew was awaiting a permit to access the city-owned lot. Burnaby then informed BC Housing it needed a liability waiver as part of an access agreement. The terms were met and the team was eventually granted access.

By September 2018, following city council rezoning approvals, Burnaby city staff emailed BC Housing with “good news” – an encroachment permit for Norland Place was ready. All the agency had to do was post a $13,500 bond and pay a $300 processing fee.

BC Housing development manager Joshua Broadhead wrote back to say he was “a little confused” by the request for money because Burnaby city council had agreed to cover its own permitting fees to help get the affordable housing built. “If you were able to revisit/waive this requirement it would be appreciated,” he wrote.

A city staffer explained BC Housing had to pay all the fees upfront and they would be reimbursed later.

In April 2019, a BC Housing manager emailed the city, seeking an update on the final building permit: “I was under the impression that we would have this permit now, but I have again been informed that we still don’t have a date to pick it up.”

Any response to the email from the city was not included in the records obtained by the NOW.

Other issues contributed to delays

In a statement to the NOW, BC Housing said it “values” its relationship with Burnaby and together the two are building 900 new affordable homes.

“The Norland Avenue supportive home project was help due to multiple reasons and the development approvals was just one of the factors. The province knows that the decades-old approval processes can be complex and can result in delays,” a BC Housing spokesperson wrote in an email.

The B.C. government is working with municipalities across the province on a pilot program to improve the development approvals process, the spokesperson said.

Hurley told the NOW he wasn’t aware of any concerns BC Housing had with the city’s processes, saying he believed the primary source of delays at Norland were knotweed and delivery of the modular units built in the Interior.

Asked about the process requiring BC Housing to pay fees and later have them reimbursed, Hurley said, “that’s a pretty normal process, so I don’t know why there would be confusion.”

Hurley, who was elected after the project was announced, is working on a new agreement with BC Housing to get non-market housing built at six local sites (five of which are owned by the city). If Burnaby’s processes pose any roadblocks to those potential developments, Hurley said the agency should come directly to him.

Watchdog not investigating Burnaby police crash that sent two to hospital
May 19, 2022 1:57 PM