Transit buses and big trucks are being forced into increasingly frequent head-to-head showdowns in the 4600 block of Brentlawn Drive in Burnaby thanks to construction workers pinching off the street with their parked vehicles.
Nov 22, 2018 5:05 AM By: Cornelia Naylor 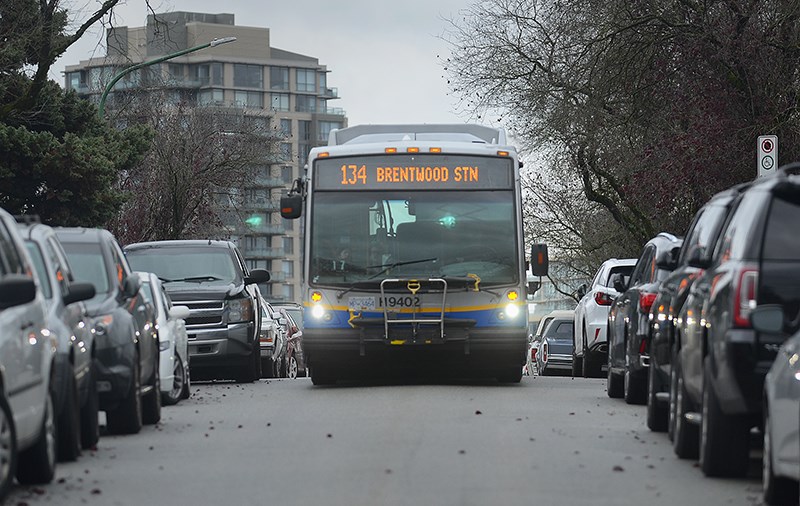 A transit bus squeezes past parked cars in the 4600 block of Brentlawn Drive.Cornelia Naylor

Transit buses and big trucks are being forced into increasingly frequent head-to-head showdowns in the 4600 block of Brentlawn Drive in Burnaby thanks to construction workers pinching off the street with their parked vehicles.

Major construction at Brentwood Town Centre draws about 700 workers from across the Lower Mainland to the Brentwood area every weekday, according to city staff, and their parked vehicles reduce Brentlawn Drive down to one travel lane.

That leads to big headaches for bus drivers and passengers when two Route 134 buses or a bus and a truck meet head-on midblock.

“If one bus is approaching from Beta and another one is approaching from the Fairlawn side, they can’t see each other because of the length of the block, and there’s a little bit of grade difference,” said City of Burnaby director of engineering Doug Louie to the city’s public safety committee this month.

The buses can’t just back up, either.

A transit supervisor needs to be called in to guide them backward while passengers either wait on board or get off and find another way to their destination.

“It happened from time to time in the past,” TransLink spokesperson Chris Bryan told the NOW. “There are other areas in the region where this does happen from time to time, but in the past year this has become more of a chronic situation, so that’s why we’re taking steps and working with the City of Burnaby to address it.”

But the city’s first solution – to limit parking on the street to three hours on weekdays – has sparked protest from residents.

They want the city to institute residents-only parking on the street or move the bus route, but the city has rejected both those ideas, saying either would just move the problem to a different street.

Staff is now recommending the creation of a 30-metre, 7 a.m.-to- 7 p.m., Monday-to-Friday no-parking zone in the middle of the block that would allow buses and bigger trucks to pass each other.

The plan would only take away about 20 metres of parking, since there is already a fire hydrant mid-block with five metres of no parking on either side of it.

Coun. Sav Dhaliwal, however, isn’t convinced the pullout would do the trick and told the public safety committee the 7 a.m. to 7 p.m. time period should be shortened.

He also encouraged staff to keep pressing Shape Properties, the mall developer, to come up with ways to keep workers from clogging up residential streets with their vehicles.

Director of engineering Doug Louie said he had already “pushed and prodded” Shape to do more, including recommending the company provide a shuttle for workers, as Fortis has done during its work upgrading a gas line from Coquitlam to Vancouver.

“It is an expensive option,” Louie said.

The committee eventually voted to table the recommendation so staff could first consult with the residents that would be impacted by the proposed 30-metre no-parking zone.