Appeal documents have to be submitted before Christmas
Dec 16, 2016 8:55 AM By: Tereza Verenca 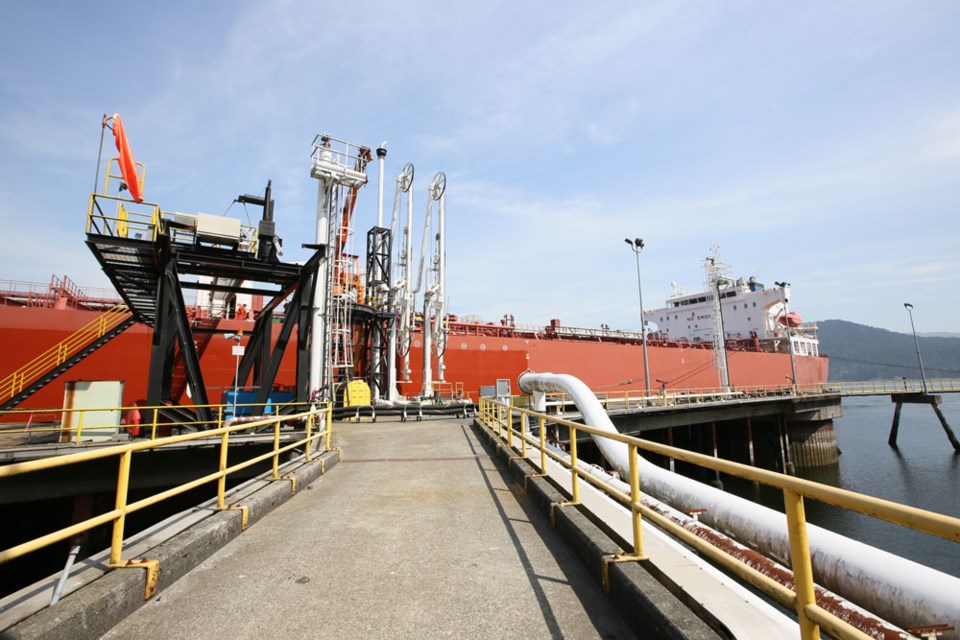 A tanker at Westridge Marine Terminal in Burnaby.Trans Mountain

A handful of First Nations, non-governmental agencies and cities – including Burnaby – will appeal the federal cabinet’s approval of the proposed Trans Mountain expansion project next week.

Mayor Derek Corrigan told the NOW the city must submit its documents to the Federal Court of Appeal before Christmas.

“(It’s) a very short time period for appeal, 15 days I think, so it doesn’t give us much time to get ready for it,” he said. “Again, it continues the process we’ve been committed to, exhausting the legal remedies that are available to us and making sure we do everything we can within the legal framework to defend our interests.”

Corrigan said the city plans to stick to the arguments it has made in the past, including the “failure of the process.”

The city will also argue that the National Energy Board (NEB) did not properly consider alternative routes and failed to hold oral cross-examination. Rather than oral cross-examination, the NEB allowed intervenors to submit information requests, which gave Kinder Morgan an opportunity to respond in writing.

“By saying OK, what’s the best route or what are the implications of this to the harbour, those kind of places are where the NEB shuts itself off from making any consideration, and those are crucial issues to be discussed,” said Corrigan.

He expects the legal battles between opposed First Nations groups and Kinder Morgan to be “front and centre.”

In June, the Federal Court of Appeal ruled the federal government under the Harper Conservatives did not adequately consult with First Nations groups when it came to the Enbridge’s Northern Gateway pipeline.

“It’s very difficult to stop the federal government from doing what it wants to do,” he said. “But this process has been so fundamentally flawed that they’ve made themselves vulnerable. … I think there may be an inclination on the part of the court to say this hasn’t been a process that has addressed the issues.”

Aboriginal support for the project is “strong and growing,” according to Trans Mountain.

Fifty-one aboriginal communities have signed Mutual Benefit Agreements (12 new signees since the announcement), which will bring more than $400 million to those communities. The 51 agreements (10 in Alberta and 41 in B.C.) include all of the First Nations whose reserves the pipeline crosses and around 80 per cent of communities close to the pipeline right-of-way.

“Together with these communities, we worked very hard to establish a relationship built upon respect, trust and openness,” said Ian Anderson, president of Kinder Morgan Canada, in a press release. “These MBAs represent not only an agreement to share opportunity and provide prosperity, but a symbol of recognition of a shared respect.”

Trans Mountain spokesperson Ali Hounsell told the NOW the company will not be commenting on the city’s appeal until it’s filed next week.

The NEB, meanwhile, said it can’t provide a statement on the city’s claims because the matter is before the courts.

The City of Burnaby was in the B.C. Court of Appeal on Dec. 8 to argue a ruling that favoured Kinder Morgan.

Burnaby’s case challenged whether federal jurisdiction for major projects, like pipelines, can overrule city laws. Previously, a judge determined the NEB was right by previously overruling Burnaby’s bylaw, which forbade the company from cutting trees while doing survey work in the Burnaby Mountain conservation area.

The lawyer is remaining optimistic that the decision will come down in the city’s favour because of a recent Supreme Court of Canada ruling in Windsor, Ont., which involved a federally incorporated transportation carrier that refused to cooperate with the city’s bylaws. The top court sided with the city over the issue of jurisdiction and ruled that the case should be heard in provincial court.

“That’s effectively what we’re trying to do,” said McDade in regards to Burnaby’s case. “When we argue about whether the pipeline has to follow municipal bylaws, do we get a fair hearing in B.C. superior courts or are we in front of a tribunal who only cares about pipelines?”

He added even though the “damage is already done” to the conservation area, it’s about “the future” and that “it doesn’t happen again.”

“It’s really about if they get to build this pipeline, will the city be able to control, through its bylaws, construction, safety, noise, traffic, a whole host of things the city normally controls or does Trans Mountain get a free pass?”

The decision was reserved and a judgement won’t be made for a couple of months.