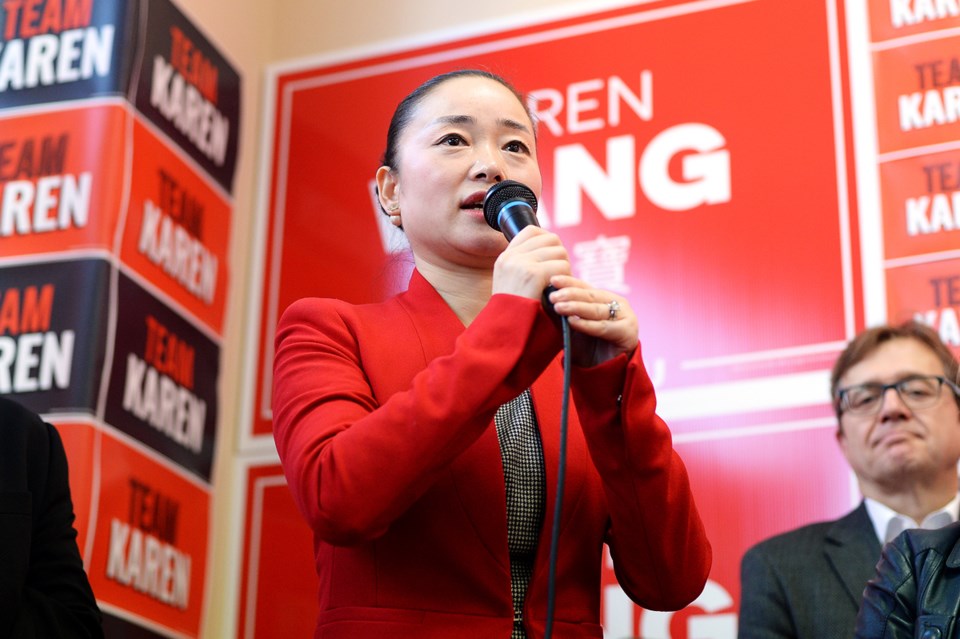 Karen Wang, seen here kicking off her short-lived Liberal candidacy on Sunday, wanted to run for the Conservatives first, according to MP Michelle Rempel.Jennifer Gauthier

The Conservative Party of Canada rejected Karen Wang as a potential candidate before her short-lived Liberal Party candidacy in the Burnaby South byelection, according to MP Michelle Rempel.

Rempel said Wang approached her party, wanting to run in the 2019 federal election.

“The Conservative Party of Canada said no to this candidate over a year ago,” she said. “There was a reason for that.”

Rempel would not specify what that reason was.

“My understanding is that there were some discussions with this particular individual and the party decided for reasons regarding her judgment, that became clear today, to not allow her to run for us,” she said.

Rempel made the comments at a press conference in Burnaby Wednesday afternoon. She was joined by Conservative candidate Jay Shin, who is running in the Feb. 25 Burnaby South byelection. The Calgary-based Parliamentarian called the press conference to call on Prime Minister Justin Trudeau to initiate a review of Canada’s immigration screening process.

Rempel’s comments came just hours after Wang dropped out of the race. She came under fire for a WeChat post in which she identified herself as the “only Chinese candidate” in the byelection and pointed out that her opponent, NDP leader Jagmeet Singh, is of Indian heritage. The post was translated from Chinese and reported by StarMetro Vancouver.

“My choice of words wasn't well-considered and didn't reflect my intent, and for that, I sincerely apologize to Mr. Singh,” Wang said in a statement. “I have deep respect for him as the leader of his party and for his public service – and I would never want to diminish that in any way.”

Shin said he was shocked by Wang’s comments.

“I’m offended as a Korean person, as a Korean-Canadian,” he said. “There’s no place for that.”

The NOW has reached out to the Liberal Party and a representative of Wang’s for comment.

Wang ran for the B.C. Liberal Party in the 2017 provincial election, losing to New Democrat Anne Kang. When the NOW asked her earlier this month why she had chosen to run with the federal Liberals after running for a party often aligned with the federal Conservatives, she said she had always been a supporter of the Liberal Party of Canada due to its core values, including diversity, liberty, multiculturalism and national unity.