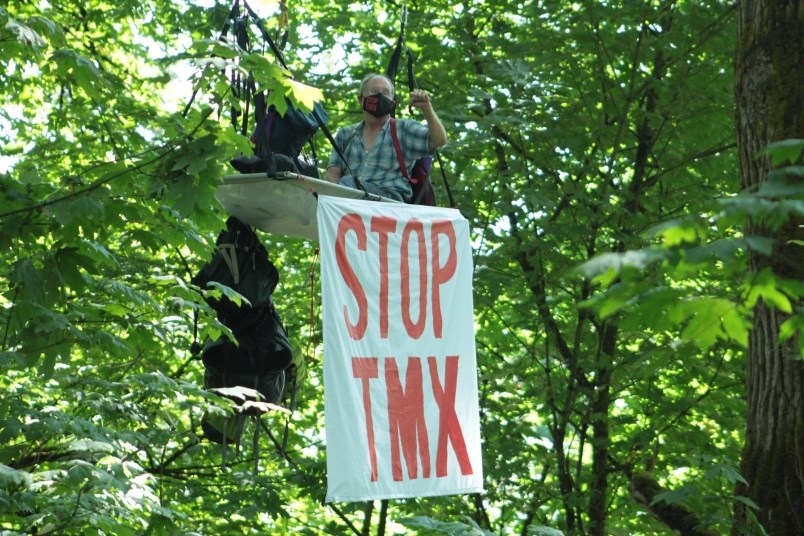 Dr. Tim Takaro occupied some trees in Burnaby during the summer. Photo submitted

A filing was submitted to B.C. Supreme Court on Friday in an effort to stop tree clearing in Burnaby for the construction of the Trans Mountain pipeline expansion project (TMX).

The application, made on behalf of public health physician Dr. Tim Takaro, is a “last-ditch attempt” to halt work which began Wednesday morning in a riparian zone near the Brunette River in Burnaby, said a news release.

The court filing argues that the approval process did not consider the downstream climate impacts of the project and asks that the court set aside the injunction order protecting the TMX route.

“The approach differs from previous legal challenges to the TMX pipeline in that prior attempts to set aside the injunction have not raised the ‘downstream effects’ of actually burning the bitumen in the pipeline, which would add considerably more CO2 to the atmosphere than the ‘upstream’ process of extracting and transporting it,” said Martin Peters, the lawyer representing the applicants. “The court will have to re-consider issues of irreparable harm and balancing the financial interests of Trans Mountain with the harm to the planet that follows from the use of this fuel.”

The filing was triggered by police clearing out the Holmes Creek Protection Camp in Burnaby Wednesday morning.

The area is located within a section of the pipeline route along the Brunette River that is home to endangered salmon, Nooksack Dace and other species. Five climbers, including Takaro, occupied a small platform suspended between two trees in the area in August and September.

Two people have locked themselves onto Burnaby trees to protest Trans Mountain
Dec 10, 2020 9:05 AM