Delegations take a bite out of Burnaby's animal control bylaw

Delegation after delegation at Monday night’s council meeting called on the city to remove of breed-specific legislation from its animal control bylaw and instead encourage responsible dog ownership.
Sep 24, 2013 10:57 AM By: Stefania Seccia 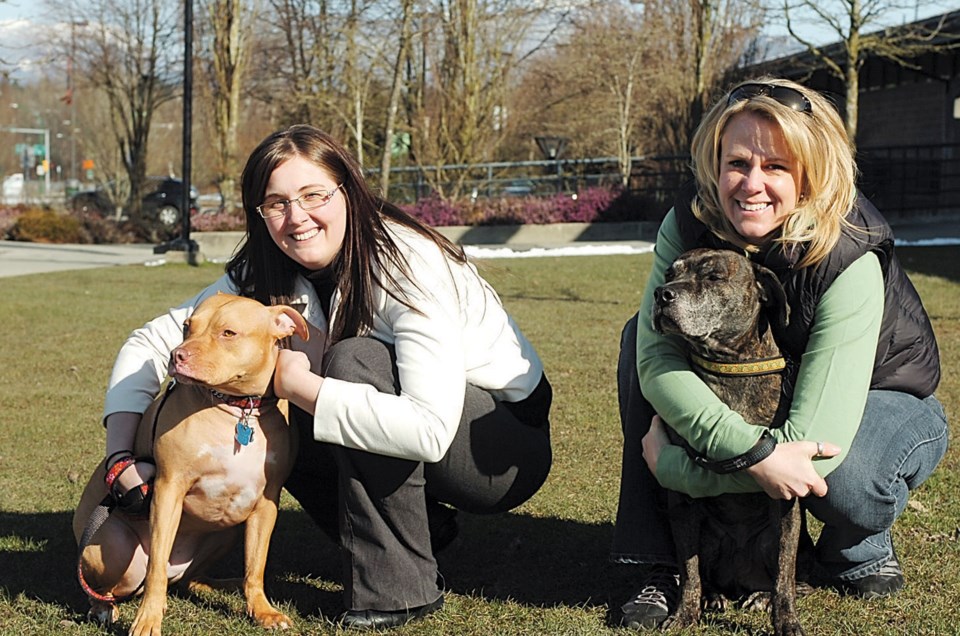 HugABull: Kristen Neratini, left, with Koda, and Shelagh Begg, with Dizzy, are part of the HugABull Advocacy and Rescue Society.

Delegation after delegation at Monday night’s council meeting called on the city to remove of breed-specific legislation from its animal control bylaw and instead encourage responsible dog ownership.

A behavioural dog trainer, animal advocates and a litigation lawyer for corporate and animal law were among the three delegations at Burnaby’s Sept. 23 council meeting.

On Sept. 9, council tabled a staff report recommending that terminology categorizing pit bulls as vicious dogs be kept and strengthened in the city’s animal control bylaw.

Council is still giving the public time to send in comments until the Sept. 30 meeting when the report will be taken off the table.

“The amendment does nothing to address the negligence and the carelessness of some dog owners,” said Rebeka Breder, an animal and corporate law litigator. “It only actually punishes the good owners that happen to have a dog that looks like a pit bull – whatever pit bull actually means because I can tell you, legally, it is very hard to enforce what a pit bull is because by definition, it is a mixed breed.”

Breder also noted that the B.C. SPCA does not support breed-specific legislation.

“The court cases that I’m involved in, part of my practice is defending dog owners with allegedly dangerous dogs and in euthanasia cases and court obstruction cases,” she said. “I can tell you what judges look at, what they only look at is public safety and responsible pet ownership. Not the breed. The breed is never considered a relevant factor.”

Breder noted there were some good points in the bylaw amendments, such as increasing the dogs allowed per household from two to three and its extensive prohibited exotic animals list.

However, she asked council to look at the cities across the U.S., Canada, including Calgary, and Europe who are banning breed-specific legislation as “they must be on to something right.”

“In the ‘70s, it was the German shepherd, then it was the chow chow, and unfortunately now it’s the pit bull,” she said. “I can tell you, in another 10 or 20 years it’ll be another breed.”

Anna MacNeil-Allcock, who also presented alongside Breder, said Burnaby is the last of three cities, along with West Vancouver and Richmond, in the region to still have breed-specific legislation in its bylaw.

“We don’t have a dog bite problem (in Burnaby),” she said. “Are dog bites on the rise? They are because the population has increased 10 per cent in the same time period the dog bites increased by 8.8 per cent – actually that’s one bite less than would be expected in your 1.7 bites per 10,000.”

MacNeil-Allcock said the studies have shown that active ticketing is the only way to decrease dog bites.

“It’ll increase reports, but if you get up over that hump, very active ticketing actually decreases dog bites,” she added.

MacNeil-Allcock pointed out the discrepancies in the staff report regarding the number of bites data from the B.C. SPCA.

“It was noted on city reports there was three possible ways discrepancies in those numbers, so I stuck to real numbers,” she said, noting she used the B.C. SPCA’s raw data from 2007 to 2011.

MacNeil-Allcock was not the only one to question the report’s numbers, as an associate professor in applied mathematics from Simon Fraser University also raised that issue.

Mary Catherine-Kropinski said she is not a pit bull owner but noted the analysis in the report is “superficial and misleading,” and has written to council on the issue.

Kropinski told the NOW the comparison of pit bull breeds to one breed in the report concerns her as the data shown does not provide enough evidence to support the conclusions drawn in the report. She suggested staff work with the statistical and consulting service department at SFU, which provides expert statistical advice for data-based research projects.

HugABull Advocacy and Rescue Society representatives and a behavioural dog trainer presented as delegations to council, as well, also asking for the breed-specific legislation’s removal.

Coun. Nick Volkow said he was surprised to hear their animal control contractor, the B.C. SPCA, was against breed-specific legislation.

“To be quite honest, I haven’t heard from our contractor in regards to this issue, and I’m curious as to why that might be,” he said.

As the Burnaby NOW previously reported, the B.C. SPCA does not endorse breed-specific bylaws in its animal control position statement, according to Marci Moriarty, the organization’s chief education and prevention officer.

“As an organization, we do not support breed-specific language simply because we don’t feel the evidence suggests it works,” Moriarty previously told the NOW. “We recommend a more comprehensive breed-neutral dangerous dog and reckless owner bylaw. The absolute protection of people’s safety is important.”

Coun. Pietro Calendino also noted an article in the Calgary Heraldstated dog bites had increased dramatically in that city since it brought in its responsible owner legislation.