Developers claim it's the largest rental development in Metro Vancouver, but the claim may not last
Dec 4, 2020 5:06 PM By: Dustin Godfrey 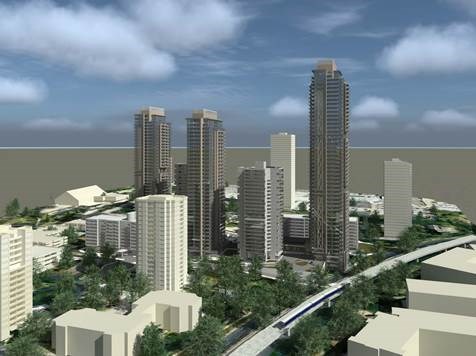 An artist's rendering of the proposed towers for the new Lougheed Village development. The three tallest towers in the image are the proposed buildings, totalling 1,200 rentals between them. Image courtesy of Starlight Developments

A developer is claiming the title of “largest rental housing development in Metro Vancouver” for a project proposed for the Lougheed town centre area in Burnaby.

In all, Starlight Developments is planning its Lougheed Village development at Erickson Drive and Salish Court – near to but not part of the major City of Lougheed development at Lougheed mall. The project is set for 1,200 units between three purpose-built rental highrise towers.

According to Starlight, that makes it the largest rental development in the region, although it may not hold on to that title long if a Squamish Nation proposal for Vancouver comes to fruition. Currently, that development, called Sen̓áḵw, is intended to see 6,000 housing units built, the majority of which is expected to be rental housing.

But while the Lougheed Village project has been submitted for the city’s approvals process, Starlight officials said in an email to the NOW that it’s “unclear when that development (Sen̓áḵw) will proceed and how long it will take.”

“It may be the case that Sen̓áḵw eventually eclipses Lougheed Village in size, but it could be many years, whereas LV is proceeding immediately as soon as a building permit can be obtained,” Starlight said, adding Lougheed Village’s 1,200 units will all be developed in one parcel, whereas it’s unclear if Sen̓áḵw will be built in one go or in stages.

With 1,200 new units planned for the development, Lougheed Village is expected to house a total of 1,728 units, with the site already home to 528 rental suites in four highrise towers.

The three new towers are expected to reach 48, 39 and 36 storeys, according to Starlight, and the existing buildings have been renovated in recent years.

“What makes this project significant is not just the addition of 1,200 new rental suites, but also the preservation of 528 existing residences,” Starlight head of development and construction Josh Kaufman said in a news release. “We’re extending the life of the existing suites and transforming the community through the addition of three new towers and best-in-class resident amenities and landscaping.”

The latest estimate of the city’s vacancy rate sits at 1.3% (one- and two-bedroom suites) to 1.7% (three-bedroom), with the vacancy rate at 1.5% for studios. According to the housing needs report, a “healthy” vacancy rate is considered to be between 3% and 5%.

In its news release, Starlight noted it plans to build everything from studios to three-bedroom apartments, along with amenities such as a daycare, a gym, a pool, kids’ play structures and gardens.

The new development was originally proposed in 2016, but it was not forwarded through the approvals process by the time the city struck its housing task force, which significantly changed the rules around multi-family developments.

Namely, developments must include a significant number of units rented out at rates 20% below Canada Mortgage and Housing Corporation-calculated median rents for the neighbourhood. Those “affordable” rentals must add up to 20% of the market units – whether rentals or condos. The city’s new policy, adopted in March this year, also allows density bonuses to developers, in exchange for units rented out at CMHC median rents.

Starlight said it would not be seeking those density bonuses due to site constraints and design considerations, among other reasons, and the developer could not say at this point exactly how many “affordable” units it would be proposing.