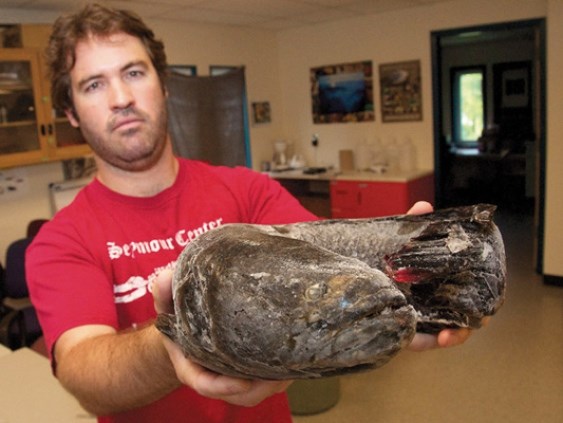 Frankenfish: Simon Fraser University biology grad student Michael Beakes with the infamous snakehead fish after it was caught and killed in June. The snakehead was first filmed in a pond in Burnaby's Central Park in May.File photo/BURNABY NOW

The City of Burnaby is reminding pet owners it’s illegal to dump their unwanted animals in local lakes.

Melinda Yong, an environmental technician with the city, told the NOWshe received a phone call from a resident inquiring if it was legal to release goldfish outdoors. According to Yong, the woman didn’t want her goldfish anymore and was advised by a Vancouver pet store to release them in a Burnaby pond, so she was calling the city to confirm that was OK.

“I did explain to the woman that it’s illegal to release any live fish into B.C.’s lakes or streams without (a) permit,” Yong wrote in an email to the NOW.

Common pet turtles and fish – like koi, goldfish and red-eared sliders – are considered invasive species because they are not naturally found in B.C. The animals can cause harm to the ecosystem’s delicate balance, because they may have no natural predators to keep their numbers in check and they can compete with native species for food.

Those penalties were introduced following the snakehead debacle at Burnaby’s Central Park pond. Two years ago, someone released an invasive snakehead fish into the pond, which led to a flurry of media coverage and the great snakehead hunt of 2012. Snakeheads are notorious for quickly multiplying and causing havoc on ecosytems with their voracious appetites. The Environment Ministry finally caught the fish, only after draining most of the pond. The incident led to stiffer penalties for releasing invasive species outdoors and a ban on live snakeheads in B.C.

The NOW called Pet Smart in Vancouver, and one of the staff told us that unwanted fish or reptiles can be taken to King Ed Pets or Island Pets, shops with locations in Burnaby. The Pet Smart staff member also said koi and goldfish would survive outside but that people could be fined $2,000 if they were caught dumping fish in local ponds. The same staff member also incorrectly suggested it was OK to dump fish in ponds in Coquitlam and at Simon Fraser University’s Burnaby campus.

Island Pets, however, will take fish of all shapes and sizes for resale in the store, and the owner gets a credit to use in the shop. Reptiles are also accepted, provided the shop has a big enough tank for them. Island Pets does not suggest people release their fish outdoors.