Driver who ran over flaggers in Burnaby found not criminally responsible

Judge rules mental disorder rendered Brenda Aregay incapable of understanding her actions and that they were wrong.
Jan 3, 2020 3:41 PM By: Cornelia Naylor 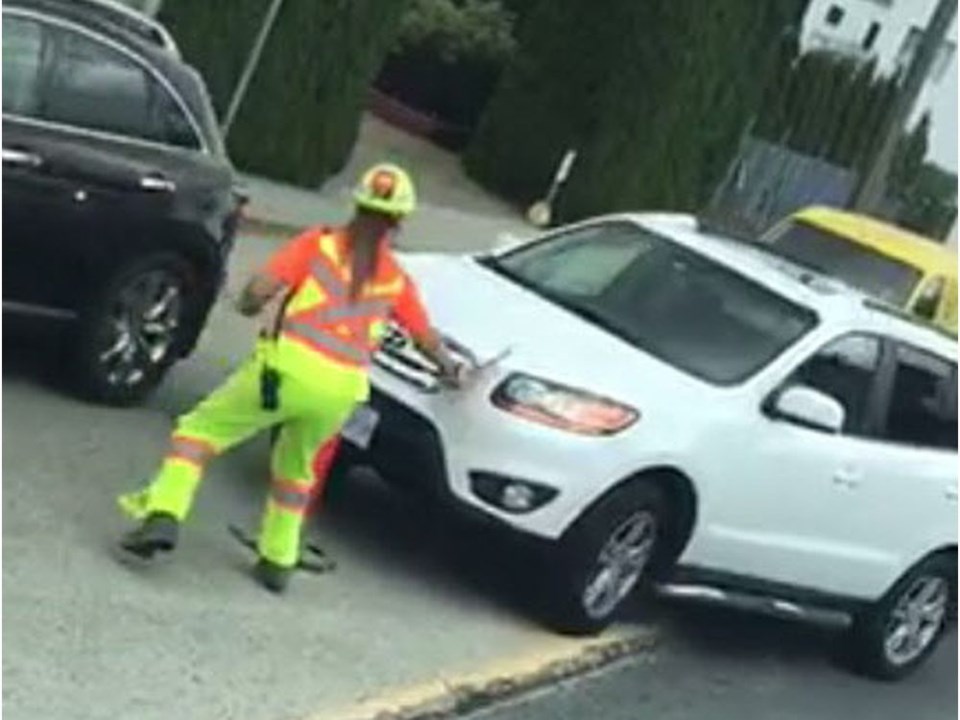 A screen grab from a video posted on YouTube shows flagger Tracey Honaizer just before she was run over by an SUV driven by Brenda Aregay in June 2017.YouTube

A woman who ran over two flaggers at a Burnaby road-construction site in June 2017 and then assaulted one of her own children and a passerby outside a local SkyTrain station has been found not criminally responsible on account of mental disorder.

A video showing Brenda Aregay mowing down a flagger with her white SUV on 10th Avenue near Kingsway and then driving off sparked outrage online after it was posted on social media in June 2017.

The 38-year-old had, in fact, gone on to run over another flagger a couple of blocks down the road moments later, according to an agreed statement of facts presented in Vancouver Provincial Court on Dec. 17.

‘Meltdown of some sort’

On the morning of June 28, 2017, paving work had narrowed 10th Avenue between 13th and 15th Streets down to one lane of alternating traffic.

Witnesses said Aregay pulled her white SUV out of a lineup of traffic into the lane closed for paving and then stopped in front of a flagger, gripping her steering wheel and staring either straight ahead or down at the console of her vehicle.

One witness said he heard loud music playing inside the SUV.

Three workers at the site tried to get her attention, but she didn’t respond, according to the statement of facts.

She looked angry and distraught, they said.

At one point, flagging supervisor Tracey Honaizer called out for someone to call 911 because something seemed to be wrong with Aregay.

“She’s having a meltdown of some sort,” Honaizer said.

Moments later, as Honaizer was allowing traffic to flow, Aregay started to pull back into the line of traffic.

Honaizer turned to the SUV with her stop sign held high, but Aregay kept going, knocking Honaizer to the ground and driving over her legs.

Two blocks away, flagger Derek Walker heard over the radio that there had been an accident.

Another driver pointed out Aregay’s SUV in a line of stopped traffic, saying it had just run over a flagger.

Then he saw the SUV make a “quick back-and-forth maneuver” to get out of line and accelerate towards him.

“Walker was looking at Aregay straight in the eye,” read the statement of facts. “He raised his arms and then tried to dive out of the way, but the front passenger side of the SUV struck his left knee and then the SUV ran over his left ankle. As the SUV drove away, a semi-truck tried to block it. The SUV drove up and over the curb to get around the semi and keep driving.”

Aregay was later arrested outside the Edmonds SkyTrain station after a woman she had punched and kicked on the sidewalk outside called police.

Two people said they had also witnessed Aregay hit and slap one of her own two children, who were with her outside the station.

The SUV was parked a short distance away.

At a hearing on Dec. 17, the counts related to leaving the scene were dropped and Aregay pleaded not guilty to the rest.

Crown prosecutor Mark Myhre and defence lawyer Michael Beckett both submitted Aregay should be found not criminally responsible because she had been in the grips of a psychotic episode that had rendered her incapable of understanding the consequences her actions or that they were wrong.

Their position was backed up by a report by forensic psychiatrist Dr. Todd Tomita.

“Although Ms. Aregay was able to drive her vehicle,” Tomita wrote, “in her psychotic state, it is unlikely that she was able to appreciate the physical consequences of her actions in hitting Ms. Honaizer, Mr. Walker or her daughter.”

Aregay couldn’t remember all of the events in the agreed statement of facts or reconstruct her emotional and psychological state at the time, according to Tomita’s report.

Along with the psychiatrist’s report, Myhre introduced videos of the incidents and audio recordings of Aregay’s time in the back of a police vehicle on the way to the Burnaby RCMP detachment.  Aregay could be heard yelling obscenities, giggling, singing and making disjointed statements about such things as demons, about being Jehovah and about helicopters that kept following her.

She was eventually taken to Burnaby Hospital, where she was committed under the Mental Health Act.

Myhre noted Aregay had already been diagnosed with schizophrenia and this was her third time being committed.

Honaizer, who sustained a fractured skull and brain bleed when she was hit, said she didn’t understand “how people with mental illness are allowed a driver’s licence.”

“I deal with angry motorists, working in all sorts of weather,” she said in a victim impact statement she read out at the hearing, “and now I have to worry about people not in their right mind.”

Honaizer said the accident changed her life forever, leaving her in severe pain and unable to work.

Because of her condition, she said she had felt like a burden to her father in the last years of his life.

“This accident financially ruined me, mentally destroyed me and physically broke me,” Honaizer said.

B.C. Provincial Court Judge Reginald Harris said the two flaggers had been “sadly and unfortunately” involved in Aregay’s psychotic episode and that the court “feels badly.”

“I know today will not bring you peace or closure, but there’s nothing that I could say or do that would change that,” he said to Honaizer.

In the end, Harris ruled Aregay was not criminally responsible on account of mental disorder.

He pointed out that “high calibre and high quality” evidence had been presented to support his conclusion and that such cases are rare.

“On a daily basis, or almost daily, this court deals with numerous persons who suffer from mental health issues,” Harris said. “It’s a rare finding of not criminally responsible by reason of mental disorder. It’s a finding that’s not taken lightly. It’s a finding that is based upon all of the evidence and with the assistance of a forensic psychiatrist; moreover, it’s a high hurdle to reach.”

Aregay has had a driver’s licence since 1998, according to Myrhe, and, until the June 2017 incident, she had had only two violations on her record (speeding in a school zone and failing to wear a seatbelt), both from the same day in 2012.

Aregay was initially banned from even being in the driver’s seat of a motor vehicle while on bail, but she successfully applied to have her bail conditions varied less than a year later to allow her to drive to and from work with written permission from her bail supervisor.

That order was changed again during the Dec. 17 hearing, when Harris agreed to remove references to the employment restriction.

Aregay is still banned from driving between midnight and 6 a.m.

Myrhe noted Aregay has had no difficulty abiding by the terms of her bail and that she has been seeing a psychiatrist once every two months.

During their last meeting on Nov. 15, that psychiatrist wrote a letter saying Aregay had regained “full functioning” and her schizophrenia was in full remission.

Myrhe said she intends to have monthly injections of antipsychotic medication.

Aregay’s case will now go before the B.C. Review Board, a tribunal that makes and reviews orders for people found not criminally responsible for offences because of mental disorder.

The board can make one of three orders: an absolute discharge, a conditional discharge or detention in a hospital.

The Review Board is required to conduct a hearing within 45 days of a ruling of not criminally responsible on account of mental disorder.

Will sentence ‘match this crime?’ asks murdered Burnaby woman’s friends and family on eve of killer’s sentencing
Apr 10, 2021 8:23 AM

Burnaby eyes barrier for intersection of ‘confusion’ that cops call a crash magnet
Apr 10, 2021 7:00 AM