Device being developed amid rising concern over rodenticide-caused raptor deaths
Jan 6, 2021 10:02 AM By: Hayley Woodin 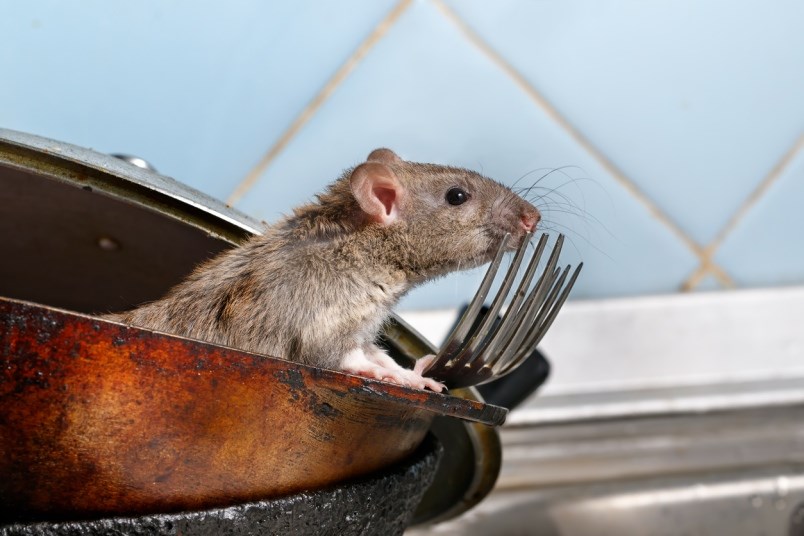 Joe Abercrombie believes he has built a better mousetrap.

“Everyone likes to call us innovative,” said the 29-year-old founder and president of Vancouver-based wildlife management company Humane Solutions Inc. “We’re not. We go in and we think about the root problem. We are [innovative] in the way we tackle problems but a lot of our services go back to basics.”

Basics include prevention, building maintenance and non-chemical rat removal, and those basics are in demand by consumers, companies and cities looking for environmentally friendly solutions.

It is estimated that rodents cause as much as $64 billion in global infrastructure, property and food-related damage annually, and one of the most commonly used defences against that damage is poison.

Anticoagulant rodenticides are cheap and effective, but inhumane by international standards and deadly to owls and other creatures that prey on poisoned rats. Their impact on wildlife has prompted public outcry, and spurred a number of B.C. municipalities to restrict their use.

“Municipalities are sick of spending millions of bucks on poison and seeing zero result,” he said. “I hope – and my partners all hope – [this] can knock poison off as the industry standard, maybe globally.”

According to the B.C. Society for the Prevention of Cruelty to Animals (BC SPCA), 10 municipalities across the province have banned the use of anticoagulant rodenticides on municipal properties, including Victoria, New Westminster and the District of North Vancouver. At least another three have committed to do so.

“We determined that there are good alternatives available and that rodenticide does not need to be used in the vast majority of cases to control rodent populations,” wrote District of North Vancouver environmental protection officer Erika Nassichuk in an email to BIV.

The district’s ban took effect in December. In place of poison, the municipality has prioritized managing rodent attractants and building maintenance. It has also tested lethal CO2-driven traps at certain sites.

“Rodent control should focus on the humane treatment of both wildlife and the rodents being controlled,” she said.

According to the BC SPCA’s chief scientific officer, Sara Dubois, a humane death is when an animal is rendered unconscious instantaneously, but she said that standard is not universally applied.

“The regulations internationally will always have a loophole,” Dubois said. “They’ll always say ‘as per industry standard,’ and reality is that the pest control industry standard is that animals die over a period of days to rodenticide poisons.”

“So it’s not illegal, it’s not an offence … to use any of these products, because that is the standard currently from the industry.”

The province regulates the sale of rodenticides, and the federal government manages which products can be used in Canada.

More than 12,000 people have signed a petition urging B.C. Minister of Environment and Climate Change George Heyman to ban rodenticides provincewide, in response to numerous reports of owls being poisoned.

Of the more than 800 raptors received by the OWL (Orphaned Wildlife) Rehabilitation Society each year, between 75 and 100 are cases of suspected secondary poisoning, and the animals don’t recover, said raptor care manager Rob Hope.

“We’re just getting a drop in the bucket,” he said, adding that there is no viable way of testing the birds to confirm toxicity until after they have died.

It remains unclear how many raptor deaths caused by rodenticides go unreported.

“These raptors will naturally take care of the rodent situation, and if we’re killing them off, then there’s obviously going to be more and more rats. You can poison them all day long, but until the cycle stops, naturally, you’re just going to continue to destroy the ecosystem,” Hope said.

Asked whether the province has explored a ban on the sale of rodenticides, the Ministry of Environment replied in an email that noted that in 2018, it sent letters to licensed pesticide vendors, clarifying that purchase requirements associated with their products had not changed.

Nassichuk from the District of North Vancouver said the municipality has prepared a letter to the province asking that local governments in urban areas be given more influence over rodenticide restrictions. She added that current regulations do not differentiate between agricultural and urban areas.

Because of varying needs related to rodent management, Dubois said, sector-specific guidelines at the provincial level may prove more successful than a blanket B.C. ban.

The BC SPCA has spent five years developing a “first-of-its-kind” set of standards for animals in pest control, a project initiated with the University of British Columbia’s animal welfare program, and with partial funding from the Vancouver Foundation.

Wildlife and rodent management companies can apply for AnimalKind accreditation, which would include a commitment to use certain rodenticides only when the presence of rats or mice poses an ongoing threat to human health and safety.

The program’s standards are stricter than what is allowed under provincial and federal regulations. Certain poisons that are legally available in Canada are also prohibited due to animal welfare concerns.

Pest management is a big industry in B.C., notes Christopher Day, president of the Structural Pest Management Association of British Columbia, and the industry has had a number of discussions about municipal restrictions and bans of rodenticides in states such as California.

“We’ve had a fair amount of pressure from concerned citizen groups and you know what? They have every right to be concerned – the products that we use do make their way up the food chain, and it does affect non-target species,” said Day, a branch manager with Orkin Canada.

“This is a tool and it’s a tool that we’d like to continue to use, but environmental and public pressure may get to the point where we’re unable to use it, and we can innovate from that.”

Day said the industry has adapted to deliver rodenticide-free programs to clients that demand them. The bigger challenge he sees is the availability of alternatives as demand increases.

“A lot of the [U.S.] companies don’t apply to have all of their chemicals approved for use in Canada,” he said.

As for Humane Solutions, the company’s next step will be to field-test 15 units of its smart trap, which will also have the ability to capture rodent and environmental data.

The company is already in talks with several municipalities that are looking for more environmentally friendly management solutions.

"We’re not approaching this expecting any real help or fast moving from policymakers,” Abercrombie said.

“I tried to figure out a way to make it better, faster, cheaper and make sustainability the by-product,” he added. “It’s just going to make it so much easier for governments to say, ‘OK, there’s a viable alternative. We can get behind this tech.’”