The closure of a Hudson’s Bay store next door to Burnaby and court battles over unpaid rent across Canada have put the future of the iconic local stores in doubt. The Hudson’s Bay Company’s location at Coquitlam Centre was shuttered Saturday, Nov.
Nov 21, 2020 2:51 PM By: Chris Campbell 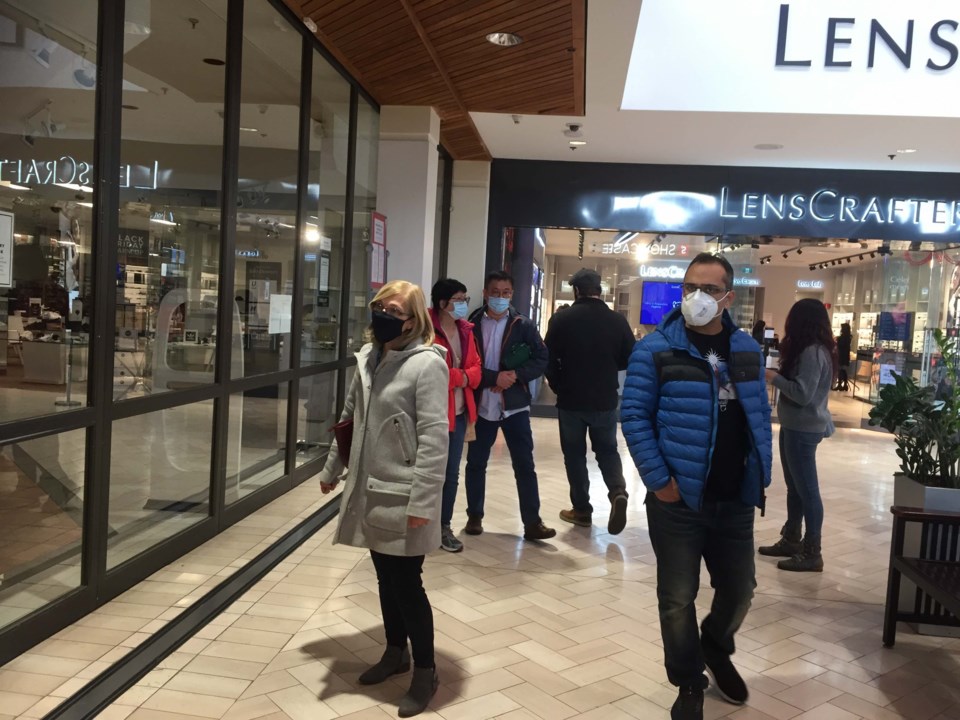 Shoppers peer into the Hudson's Bay at Coquitlam Centre after it was shuttered for failing to pay rent.

The closure of a Hudson’s Bay store next door to Burnaby and court battles over unpaid rent across Canada have put the future of the iconic local stores in doubt.

The Hudson’s Bay Company’s location at Coquitlam Centre was shuttered Saturday, Nov. 21, even as the mall filled with weekend shoppers. Inside, the lights had gone dark, save for the odd Christmas tree lit up for the pending shopping season.

“Black Friday warm up,” read one sign looking ahead to next week’s major shopping holiday. No staff were in sight. A notice posted at the store’s entrance by landlord and mall owner Morguard Investments Limited, stated the company had defaulted on its rent payments.

There are two Bay stores in Burnaby, one at Lougheed Town Centre and another at the city’s biggest mall, Metropolis at Metrotown.

“The Premises has been re-entered and the Lease has been terminated by the Landlord for default in the payment of rent,” began the notice dated Nov. 21.

The letter notes the department store has 30 days to dispute the existence of the default. Glacier Media reached out to Morguard and Hudson’s Bay Co. but neither were immediately available for comment.

The iconic retailer just celebrated its 350th anniversary, but despite its staying power, the pandemic has strained the company’s viability.

This isn’t the first time Hudson’s Bay Co. has struggled to pay its rent.

According to a Toronto Star report published Saturday, court records show the company has leases valued at $20 million a month and hasn’t paid any rent to eight landlords across Ontario, Quebec, British Columbia and Florida.

How the termination of the lease in Coquitlam will play out is not yet clear; however, recent court case suggests it could be a tortuous path.

Last week, an Ontario judge directed the company to pay half the rent — $659,395 — it owed to the landlord of a Toronto-area mall, while at the same time, blocking its eviction.

"HBC’s aggregate indebtedness to the landlords of the Oxford Shopping Centres ... is extremely large and growing at an alarming rate," Oxford Properties said in court documents in the lead up to the decision.

The spokesperson for the Toronto-area landlord said the order was an interim ruling and that they were confident they will “prevail.”

In a statement from Ian Putnam, president and chief executive officer of HBC Properties and Investment, said the company was grateful the court “has recognized the extraordinary challenges of the global pandemic and how the burden can be shared fairly and lawfully, especially as it relates to non-essential retailers.”

The legal wrangling highlights the challenges facing both commercial landlords and retailers as foot traffic in brick-and-mortar stores continues to lag after widespread closures last spring.

With the second wave of the pandemic intensifying, the coming months could see more disputes emerge as shoppers turn to e-commerce instead of local shopping malls ahead of the busiest shopping season of the year.