Including workers at stores located in Vancouver, Langley, and Port Coquitlam.
Apr 16, 2021 9:36 AM By: Lindsay William-Ross 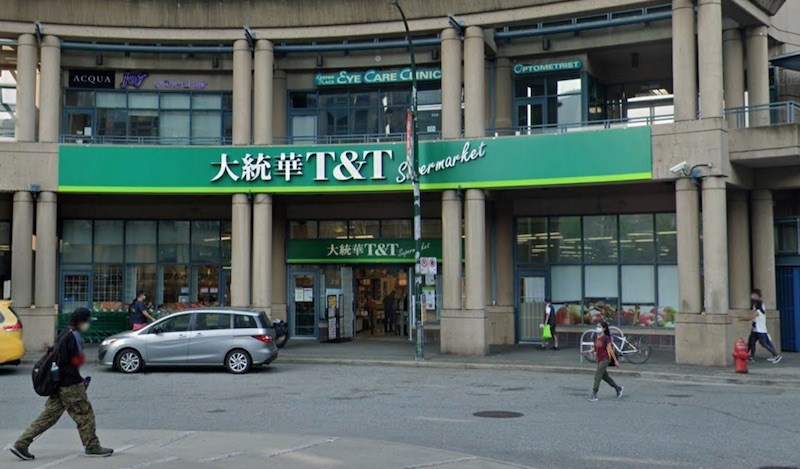 A part-time employee at the T&T Supermarket at 179 Keefer Place in Vancouver has tested positive for coronavirus (COVID-19). Photo via Google Maps

Store staff at major grocery chains in Metro Vancouver have tested positive for coronavirus (COVID-19), including workers at locations in Vancouver, Langley, and Port Coquitlam.

Loblaw Companies Ltd, the parent company of Real Canadian Superstore, No Frills, and other local chains, provided updates to its COVID-19 employee case listings on April 16 indicating a case at the following store in the Lower Mainland:

The Abbotsford Superstore case is the second one reported this week at that location; the previously infected employee was listed by Loblaw on April 14.

While T&T Supermarket is owned by Loblaw, the Canadian Asian grocery chain lists its COVID-19 cases separately on its own site.

On April 15, the company reported a new case affecting an associate at one of its B.C. stores:

Sobeys, Inc, the parent company of Safeway, Thrifty Foods, and franchisor of discount grocery chain FreshCo, indicated on its case tracker that people working at three of its B.C. Safeway stores have tested positive for the virus, of which two are in Metro Vancouver. The affected stores are as follows:

Elsewhere in B.C., Sobeys reported a store worker has tested positive from its Safeway in Pentiction in Interior Health.

Another noteworthy listing on the Sobeys case tracker for B.C. one reported April 14 from a FreshCo with a Maple Ridge address labelled as being in Delta; the case is actually from a worker at its FreshCo franchise in the Delta community of Ladner, and Sobeys has updated its case tracker accordingly. That store info is as follows:

None of the above-listed stores are considered either "public exposure" sites by Vancouver Coastal Health or Fraser Health, and none of these grocery stores have been shut down by the health authority or WorkSafeBC under new parameters put in place in the province.