Hastings Street in the Heights a conflicted area - study

Hastings Street has the feel of a highway, running through Burnaby’s most pedestrian-oriented neighbourhood, the Heights.
Sep 25, 2015 4:12 PM By: Janaya Fuller-Evans 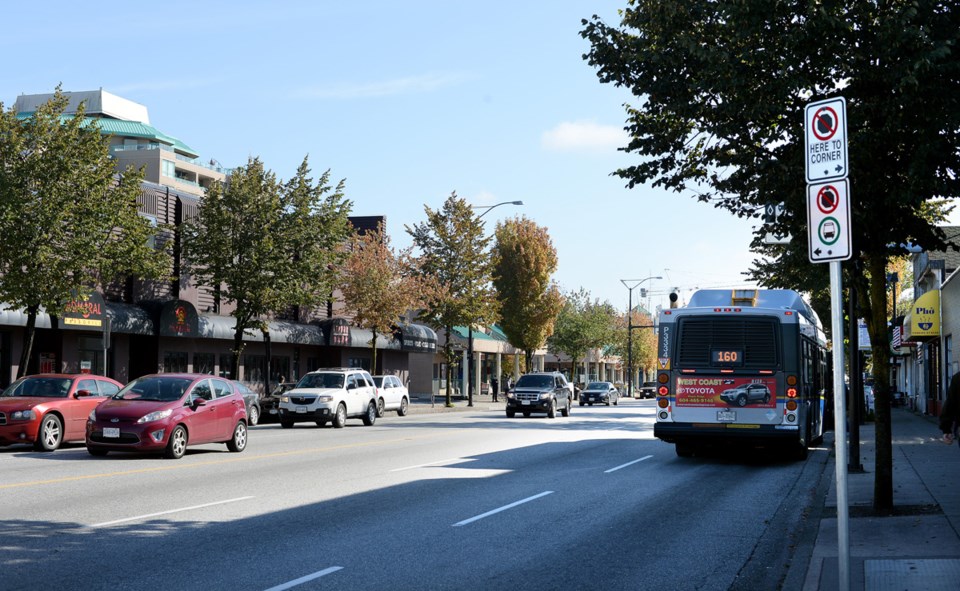 Hastings Street has the feel of a highway, running through Burnaby’s most pedestrian-oriented neighbourhood, the Heights.

The two different functions – a major thoroughfare with buses, trucks and commuters rushing in and out of Vancouver, alongside a walkable shopping district – make Hastings Street in Burnaby a conflicted area, according to a study released by Slow Streets.

The study, conducted by the Vancouver-based urban design and planning group, suggests some solutions for the neighbourhood that is at odds with itself.

“Burnaby Heights itself features a lot of the great elements of a very good retail-oriented streetscape,” Samuel Baron, one of the study’s authors, told the NOW. “But we knew that this possibility and the quality of that retail and street-oriented space was undermined by the fact that over 30,000 vehicles travel through that area per day. It’s essentially trying to do two things at once.”

The study pointed to the HOV lanes during peak hours as a particular issue, with noise reaching 78dB (equivalent to garbage disposal) on the south side when parking is removed and the HOV lane is in use.

The study offered potential solutions to managing issues such as noise levels, proximity to moving vehicles, and the amount of traffic in the area.

Managing parking on and around Hastings Street was one suggestion, particularly making sure parking is well-marked, the study stated.

Lowering the speed limit to 30 kilometres per hour instead of 50, as well as creating thinner traffic lanes, would reduce noise and create more space for the sidewalk and patio areas along Hastings Street, the study added. Traffic calming measures would need to be introduced in the neighbourhood to prevent rat running.

Maximizing side streets was another suggestion, with some side streets as pedestrian-only zones, with retail and outdoor space.

In the short term, the opening of the Evergreen SkyTrain line may reduce some of the traffic that uses Hastings Street as an East-West connector, according to Baron.

They launched Slow Streets a year ago, Baron said.

The Heights Merchants’ Association contacted SFU’s urban studies program last year, looking for a student to do some observational research of sidewalk use, according to the association’s executive director, Isabel Kolic. The student was involved with Slow Streets.

“I found it really rich and thorough,” she said. “There’s definitely a lot to chew on.”

Kolic plans to present it to the association’s board, she said.

“I think for the most part it’s harmonious with the feedback we get from merchants and from shoppers,” she added.

However, it could be some time before any of the suggestions are implemented by the city, if the city chooses to do so.

While the study’s observations are correct, any potential solutions will not be easy ones, according to Doug Louie, Burnaby’s assistant director of engineering, transportations services.

“I think some of the observations that Slow Streets made regarding how one might try to improve the pedestrian environment along Hastings Street is valid,” he said. “I mean, they’re good observations. The key is, how do you get there?”

There are many different uses for Hastings Street and each one must be considered, Louie added, pointing out it is part of the major road network, it’s a truck route, and a busy transit route.

“Whatever we do let’s say to widen sidewalks or remove cars, there’s going to be major impacts,” he said. “And of course we need to review that.”

The current balance, whether people feel it is weighted too heavily for cars or pedestrians, has not been easy to achieve, Louie said, mentioning the traffic calming efforts brought to the neighbourhood a few years ago, which were intensely debated.

“Consultation would need to take place, and it’s not going to be an easy consultation,” he said.

The full study can be found at tinyurl.com/HastingsAStroad.

Ex-girlfriend to testify via CCTV against former BC Lion accused in Burnaby murder
Jan 26, 2021 3:42 PM
Comments